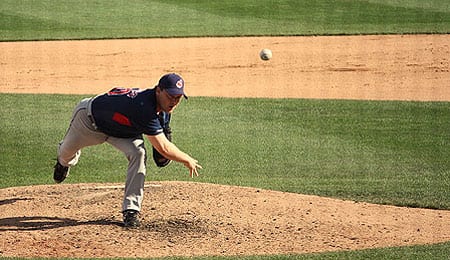 Matt Herges has been a very pleasant surprise in the Tribe bullpen.

How about a tip of the hat to Matt Herges? This dude wasn’t even on the Indians’ roster to start the season, and after getting hammered in Colorado last season, it was safe to wonder if his career was nearly over. But to his credit, Herges has been dominant since Cleveland gave him another shot when an imploding Rafael Perez needed to be farmed out for a while last month. Tuesday night, the journeyman tossed his seventh straight shutout outing, a run that’s been predicated on superb command.

Herges has been so brilliant, in fact, that he’s be given a key role in the Indian pen and he’s run with it. One of the keys for Herges so far this season has been that for the first time ever, he’s not pitching like a flyball hurler. Yes, it’s a small sample size, but he’s actually getting neutral results. Could the 39-year-old hurler have picked up a new trick? Either way, it’s time to start considering him as an option in your AL-only league.

By RotoRob
This entry was posted on Wednesday, June 10th, 2009 at 9:16 am and is filed under BASEBALL, Fantasy Notes, RotoRob. You can follow any responses to this entry through the RSS 2.0 feed. You can leave a response, or trackback from your own site.