The Wire Troll: Trolling for Saves 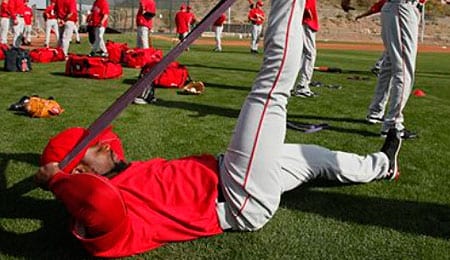 Fernando Rodney’s value has been stretched to the max now that he’s back closing.

It’s time to briefly discuss a little year-end Fantasy strategy. For those Fantasy owners playing in leagues with an inning cap for pitching, it’s important to remember that stat service providers do in fact allow you to exceed that maximum. On the day your team exceeds the maximum, all stats accrued on that day will count. If you have points to gain on that last weekend in both wins and strikeouts, loading up on your starting pitching can be a difference maker. It can be a long winter when you come up one win or a handful of strikeouts short of a league title.

Without further ado, let’s take a look at some end of August wire options.

Fernando Rodney, RP, Los Angeles Angels: The trade of Brian Fuentes — or would that be salary dump? — has thrust former Tiger Rodney back a closer role for the Angels. Rodney has history in the role and should garner the majority of the save opportunities, but don’t be surprised if Jordan Weldon vultures a save or two as the Angels look towards the future in September.

Carlos Zambrano, SP, Chicago Cubs: In four starts since returning to the rotation, Big Z has been shockingly solid. He has managed two wins and allowed only six earned runs over this span. In two of those starts, he allowed a combined 13 walks and still managed to escape relatively unscathed. Zambrano is still frustratingly inconsistent, but if strikeout potential and wins are your needs, you could do much worse at this stage of the season.

Darren O’Day, RP, Texas Rangers: A strained muscle suffered by eighth-inning man Frank Francisco has opened the door for both holds and potentially saves in Texas. O’Day is the primary beneficiary, but don’t rule out Alexi Ogando from working his way into the mix. Young phenom Neftali Feliz has now pitched in 59 games and with the Rangers running away with it in a weak AL West, don’t expect him to be overworked down the stretch. If hold opportunities and a sprinkling of saves is in order for your Fantasy squad, keep both O’Day and Ogando on your radar.

Jeff Samardzija, SP, Chicago Cubs: Now here’s a bit of a reach, but for those willing to gamble in deep and NL-only leagues on pitching, Samardzija is worth taking a peek at. Since returning to the rotation at Triple-A Iowa, he is now sporting a 7-1 record and 2.70 ERA, while allowing only 49 hits in 70 IP. Now for the bad news: Samardzija has also walked 37 over that span. Control is clearly still a problem, but he should get some opportunities to display his wares when rosters expand in September.

Brian Matusz, SP, Baltimore Orioles: Here’s a kid that, although incredibly inconsistent, is showing why he was worthy of the top-prospect tag. Matusz is coming off back-to-back victories against the ChiSox and Rangers and allowed only one earned run in both those strong efforts. As mentioned, consistency is an issue, but he’s currently pitching well and has the potential to be an asset down the stretch in deeper leagues. Remember his name and file it away for future reference as when Matusz falls into the late-teen rounds in next spring’s drafts, he could be one of the top candidates to fall into the post-hype success group.

Cameron Maybin, OF, Florida Marlins: The injury to Chris Coghlan combined with Cody Ross being plucked from the waiver wire leaves the Marlins a tad short in the outfield and they have called upon Maybin to fill the void for the duration of 2011. At Triple-A New Orleans, Maybin slugged four homers, drove in 23 runs, stole five bases and managed an outstanding .338 BA. With playing time comes opportunity and if runs scored and stolen bases are a need for your Fantasy squad, he makes for a great addition for the stretch run.

Other Options to Consider

Craig Kimbrel, RP, Atlanta Braves: Billy Wagner has now firmly committed to retiring after the 2010 season so those playing in keeper formats should run not walk to your waiver wire and get Kimbrel signed. The 22-year-old flame thrower will enter Spring Training as the prohibitive favourite for the closer gig and has the numbers to back up that assertion.

Barry Enright, SP, Arizona Diamondbacks: Three wins in his past five starts and he is still only owned in 22 per cent of CBS leagues? The kid deserves just a bit more respect from Fantasy owners, especially since he always seems to get matched up against an ace, yet has come through time and time again for the D-Backs.

Todd Helton, 1B, Colorado Rockies: A Todd Helton sighting has occurred in the Mile High City. In his past seven games, the vet is batting .435 with five RBI and he’s homered in his last two games.

Marcus Thames, OF, New York Yankees: Hot streak alert! With four homers in his past four games, Thames should get your attention.

Nolan Reimold, OF, Baltimore Orioles: Reimold is looking at a September call up and a good month could go a long way in salvaging some semblance of value heading into 2011.

Wilton Lopez, RP, Houston Astros: Now that closer Matt Lindstrom has experienced a set-back from his back injury, it appears that, at least for the next several weeks, Lopez is filling the set-up role for the ‘Stros. Lopez is a solid option in leagues counting holds and if Brandon Lyon should falter, he could be an option for saves.

Casey Blake, 3B, Los Angeles Dodgers: In his past seven games, Blake is batting .357 with two homers and nine RBI. Ride the wave.

Nick Masset, RP, Cincinnati Reds: Masset has quietly turned things around after a dreadful start to the 2010 campaign and has now allowed only two earned runs in 28 appearances during July and August. He’s even managed to bail out incumbent Francisco Cordero on several occasions, earning two saves. Expect more of the same in September.A

By Tim McLeod
This entry was posted on Sunday, August 29th, 2010 at 2:51 pm and is filed under BASEBALL, The Wire Troll, Tim McLeod. You can follow any responses to this entry through the RSS 2.0 feed. You can skip to the end and leave a response. Pinging is currently not allowed.