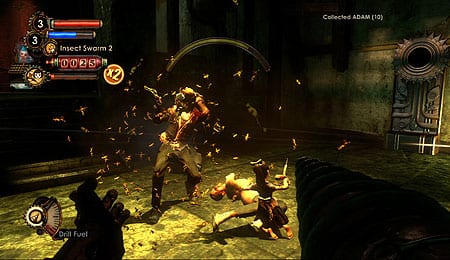 By limiting your weapon and plasmid options, the Protector Trials can make life tough.

After serving up a pair of multiplayer add-ons (Sinclair Solutions Tester Pack and Rapture Metro), 2k is finally offering some post-launch single-player content for BioShock 2 with the release of the Protector Trials. Priced at 400 MS Points (US$5), the newest DLC offers:

The Protector Trials are built off the ADAM gathering exercises found in BioShock 2 as you’re once again cast as a Big Daddy tasked with protecting a Little Sister while she collects ADAM from corpses. Each trial sends wave after wave of crazed splicers and even Alpha series Big Daddies to try to stop you. It plays out just like the main game, but with a twist: your load outs are chosen for you.

One trial might give you only trap rounds for your guns, allowing you to set up your defenses but not directly shoot enemies. Another could limit you to melee weapons and decoy plasmids. Whereas most gamers likely leaned heavily on a handful of plasmids and weapons throughout the main adventure, the Protector Trials force you to adapt to the hand you’re dealt, making for some interesting and challenging scenarios.

You begin with a finite amount of ammunition, health packs and EVE hypos, but each splicer kill nets you cash to spend on replenishing your supplies at vending machines. That makes the job of protecting your Little Sister and keeping yourself healthy and fully loaded a balancing act where you’re constantly trying to find an opening long enough to leave your Little Sister unprotected and restock.

As noted, each of the six maps contains three trials. The first trial, designed to be the easiest, is worth one star, while the third is worth three. As you earn stars you unlock other locations as well as some early BioShock 2 concept art. Each trial is graded based on the amount of ADAM your little sister collects (there’s an Achievement for earning all A’s), though it doesn’t keep track of secondary things like enemies killed or health packs used.

It may not be the story-driven single-player DLC people have been clamouring for, but unless you completely disliked the ADAM collecting portions of BioShock 2, the Protector Trials are worth picking up. They’re inexpensive and do a nice job of forcing players to utilize combat tactics they didn’t use during the main game.

By Herija Green
This entry was posted on Monday, August 9th, 2010 at 11:43 am and is filed under Herija Green, Video Game Reviews. You can follow any responses to this entry through the RSS 2.0 feed. You can skip to the end and leave a response. Pinging is currently not allowed.