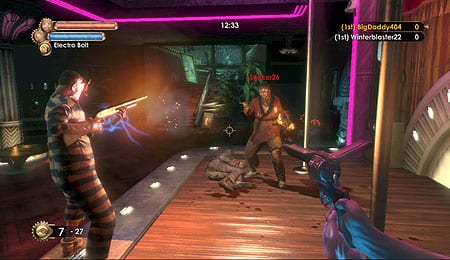 It’s been just a little over a month since BioShock 2 was released, and 2k has kicked off their promised aggressive approach to post-launch DLC with the Sinclair Solutions Tester Pack. For 400 points ($5), you’ll unlock:

The term “unlock” is completely accurate here as you aren’t actually downloading any new content. Instead you’ll be granted access to content already on the disc, which is something I first remember seeing in Resident Evil 5, when gamers were asked to part with $5 to play the game’s Versus Mode. Some will surely be upset by this, but 2k says it was done this way to “not split the player base” into those with DLC and those without.

However you feel about the business aspect, the Sinclair Solutions Tester Pack actually contains some pretty cool stuff. McGraff, a member of Rapture’s criminal element, is easily my favourite character to date, and Calraca isn’t far off. Obviously raising the level cap is a big deal for those that have already maxed out and continue to play, though achievement/trophy hunters may be frustrated to learn that nothing new has been added on that front.

From an in-game standpoint the new weapon upgrades are the main attraction here as some of them really add pop to your arsenal. Each of the game’s seven weapons received an upgrade with the sawed-off shotgun emerging as a highlight for me as well as my weapon of choice for close encounters.

The lack of new achievements, trophies and/or maps is a little disappointing, but the new characters and weapon upgrades are welcome additions. If you’re still fighting in Rapture’s Civil War, the Sinclair Solutions Tester Pack is definitely worth downloading.

By Herija Green
This entry was posted on Thursday, March 18th, 2010 at 2:56 pm and is filed under Herija Green, Video Game Reviews. You can follow any responses to this entry through the RSS 2.0 feed. Responses are currently closed, but you can trackback from your own site.