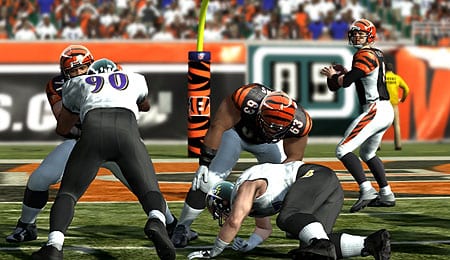 The refined blocking ranks as one of this year’s biggest improvements.

When you’re the only game in town, as Madden has been for NFL fans for quite a while now, you have to serve a lot of masters. One look at the game’s featured enhancements tells you EA was looking to attract more casual football fans by streamlining the process of playing games. Hardcore Madden enthusiasts may bristle at some of the changes, but Madden NFL ’11 has quietly made several improvements under the hood that continue to push the series forward.

After keeping basically the same layout for years, there are a handful of changes that long-time players will have to familiarize themselves with. The biggest change during plays is that true dual-stick control has been implemented as the right stick now controls things like leaning into or away from contact rather than canned trucking and juke animations. Turbo has also been removed (however, it can be turned back on in settings), and though it takes a little while to get used to, once you get the hang of it you’ll be creating more rewarding and organic looking runs than ever before.

Decidedly less successful is the remapping of pre-snap adjustments to the d-pad. In the past your first button push would select which defensive level (d-line, linebacker, secondary) you wanted to adjust with the second making the change. Now that it’s all handled with the d-pad you’ll need to issue additional commands, and the “Strategy Pad” menu fills a good portion of the screen. Given the pace of the game, I sometimes felt like I didn’t have enough time to cycle through all the commands necessary to properly set up my defense.

The kicking game has also had the clock turned back as the analog stick control has been dropped in favour of the old style kicking meter.

Players have never moved more realistically than in Madden NFL ’11 as the locomotion feature so prominently hyped for EA’s NCAA Football ’11 has found its way into the professional version as well. Improved blocking A.I. has players engaging realistically and makes finding and hitting cutback lanes eminently satisfying. Wonky tackling animations have also been nearly eliminated — though you’ll still see the occasional oddity — and watching receivers work along the sidelines is a treat.

The game’s presentation elements have been heightened in some areas (the post-Super Bowl celebration is particularly enjoyable), but you’ll still be seeing many of the same sideline and crowd animations from last year. One thing I don’t understand is why the ESPN license has once again been bypassed, especially after its seamless implementation into NCAA. There are also persistent issues with the wrong teams being shown in post-play celebration shots and the camera swinging behind solid objects when officials are calling penalties so all you see is a gray screen.

Easily the biggest change to the audio side is the addition of Gus Johnson, who could make watching paint dry exciting, as the new play-by-play man. He does strong work in his debut, though much of what he says sounds pieced together and isn’t as smooth as it could be. EA Tiburon would do well to get Cris Collinsworth back into the booth to record more lines of dialogue, as he repeats too often, sometimes saying the same thing on consecutive plays (like mentioning how much he enjoys a penalty-free game). Score and situation isn’t always accurately reflected, either, such as discussing wind conditions as a reason for missing a field goal when playing in a dome.

Ambient sound remains excellent, and the new stadium-specific chants (such as Go Pack Go or J-E-T-S) and effects (Minnesota’s horn following a first down) are welcome additions. The crowd in general sounds livelier than in past years as well.

Between the virtual lines, Madden NFL ’11 continues to build on the major improvements made in last year’s version. The melding of the procedural tackling (Pro-Tak) and locomotion systems not only makes player movements look more realistic, it also feeds into the actual gameplay as player attributes seem to hold more sway than ever before. Power backs feel decidedly different than speed backs, receivers create separation during their routes, and agile defensive lineman are more apt to spin out of blocks en route to a bone-jarring sack than their bull-rushing counterparts.

As previously mentioned, the blocking A.I. has been greatly improved this year. Offensive linemen, fullbacks and tight ends are assignment-sure in most instances, ably executing double teams and clearing paths for your backs. The computer’s running game is also deadlier as the A.I. is more decisive with choosing its lanes and hitting the second level.

Unfortunately, the blocking still contains one glaring flaw. Play-action passing has been rendered all but useless in most instances, particularly if rolling out is part of the plan. Instead of serving as a deceptive call to keep defenses honest, play-action almost always results in negative yardage. In fact, you’re frequently unable to even complete the pre-canned faking animation without having a defender bring you to the turf because of a blown blocking assignment.

The biggest pre-snap addition is GameFlow, which takes care of the game-calling duties for those that would rather not be burdened. You’ll be given a brief breakdown of each call from the sideline — telling you where you’re vulnerable and what the play is designed to do — and for the most part, it does a solid job. However, there are definitely times it makes strange calls and the advice from the sideline can be nonsensical (such as advising against forcing a pass on a two-point conversion). Still, it’s designed to simplify and accelerate games, and it accomplishes that.

Gamers can also customize GameFlow by creating a game plan based on individual teams’ playbooks, choosing which plays they’d like to see called in certain situations (second-and-long, red zone, etc.). Each potential choice is then weighted with stars assigned to a play. The more stars you give a play the more likely it’ll be called in that situation. It works well, and I found myself using it during the early stages of games or in less competitive situations such as head-to-head with my visiting in-laws. When things got intense, though, I went back to traditional play calling.

While significant strides were made in-game, Madden NFL ’11 did little more than superficially tweak the main offline modes. Be An NFL Superstar appears to be a direct port from last year with no noticeable changes, leaving it as bare bones as ever. It’s not as if games like MLB: The Show or NBA 2k10 have nailed down what it means to become a professional athlete or live that life, but the lack of any semblance of depth here is disappointing.

EA Tiburon also took a largely hands off approach with the Franchise Mode, adding only a smattering of items like new free-agency factors where players’ desires (money, weather or market size) will help determine whether or not you’ve got a good chance of inking them to a deal. All of the usual stuff returns, including hiring/firing staff, negotiating contracts, upgrading your stadium and importing draft classes from NCAA Football ’11, so it remains a robust, if mostly familiar, experience.

What is new is the addition of online team play, which allows up to six people (three on each side) to square off. The basic setup has one player operate as the quarterback, another as a running back and the third as a receiver on offense. Defensively you’re able to jump around more liberally, though it is designed to have one human-controlled player at each level.

As you might expect, online team play (OTP) is only as good as your teammates. When you’re paired with knowledgeable football aficionados who like to use their mics it can be a lot of fun as you call out potential plays and suggest adjustments — there’s undeniably a level of satisfaction when you and two human teammates pull off a great impromptu play. Conversely, if the guy controlling the quarterback (and therefore calling the plays) only wants to throw deep to a CPU teammate and never breathes a word, it gets stale in a hurry. Performance-wise, OTP runs smoothly with the only hint of slowdown seen on a change of possession when there’s a very noticeable hitch.

Also included are Madden Moments, which put you in memorable situations from the 2009 season and ask you to recreate or alter the actual outcomes, and Madden Ultimate Team. The latter was first introduced as a free downloadable add-on last year and is essentially a combination of card collecting and Fantasy football. Cards are obtained by using coins, earned through online play or available for purchase through the Madden Shop.

Efforts to attract a broader audience by streamlining certain elements ultimately haven’t come at the expense of what appeals to the hardcore fan base. So while Madden NFL ’11 may not have a flashy new selling point like last year’s Online Franchise Mode, the team at EA Tiburon continues to improve where it really matters most — the core game of virtual pigskin.