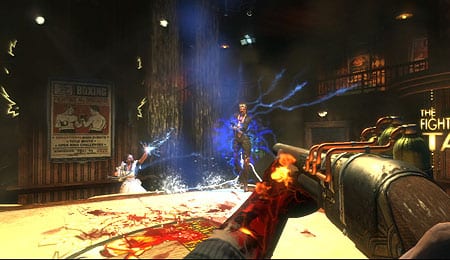 Although 2k offered BioShock 2 owners a few downloadable morsels with the Sinclair Solutions Tester Pack back in March, the recently released Rapture Metro represents the first sizable chunk of DLC since the game’s initial launch. There’s considerably more content this time around, and for 800 MS Points ($10) you’ll gain access to:

There are also two other smaller downloads available. The first is a new melee-only gameplay mode entitled Kill ’em Kindly, which is free to everyone. The other is a character pack containing Mlle Blanche de Glace (AKA “The Actress”) and Zigo D’Acosta (“The Fisherman”). That will set you back 160 MS Points (US$2).

Getting back to Rapture Metro, clearly the big draw for those still fighting in the civil war is the addition of six brand new maps, which pushes the total to 16. The quality at work on the newcomers is first rate as locations like Fighting McDonagh’s and the expansive Dionysus Park instantly ranked among my favourites. The visuals found in Dionysus Park are particularly excellent, highlighted by an art gallery with numerous distinctly BioShock-flavoured pieces.

Also, considering Modern Warfare 2 recently charged 1,200 MS Points (US$15) for five maps (three new, two updated) the Rapture Metro DLC looks like a great deal on the surface. Unfortunately, at this point there’s no designated playlist for those that have purchased the DLC. Instead, the new maps have simply been tossed into the rotation with the old ones. But here’s the kicker — if even one person in the game lobby hasn’t purchased the map pack they simply won’t show up… ever.

I tried off and on for a week to test the new maps outside of one-on-one private matches, but never had one come up. The developers once again used the reasoning that they don’t want to split their player base between those that have purchased the DLC and those that haven’t, but their solution to simply host private matches contains two problems.

First, it’s simply not that fun to always have to organize multiplayer matches through forums (that’s why Halo 3: ODST fell off the Xbox Live Top 20 list so quickly). And second, two of the three new achievements/trophies are dependent of playing and winning public matches on the new maps.

There have also been issues reported with the rebirth feature, which essentially works the same as Prestige Mode in Modern Warfare 2, as gamers that have done the rebirth are losing not only their rank, weapons and plasmids, but their leaderboard ranking as well.

I can’t honestly recall a situation quite like this one. On the one hand, 2k has pumped out some really strong new content. The maps are absolutely top notch, Kill ’em Kindly is a fun alternative to the standard modes and Rebirth gives players that have maxed out a reason to return. However, what good is all this new content if you can’t jump online and just play the maps?

2k is promising a patch with an estimated arrival of mid-June, which hopefully will solve these problems. If/when that happens, Rapture Metro immediately becomes a great value for fans of BioShock 2’s multiplayer experience.

By HC Green
This entry was posted on Wednesday, May 26th, 2010 at 2:22 pm and is filed under Herija Green, Video Game Reviews. You can follow any responses to this entry through the RSS 2.0 feed. You can leave a response, or trackback from your own site.