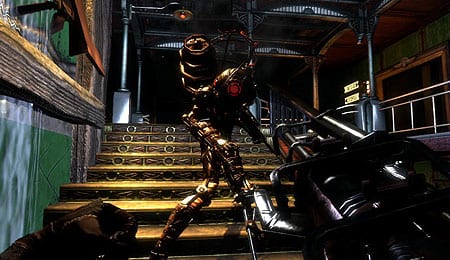 The Big Sister is not to be trifled with.

By Herija Green and Mike Chen

The original BioShock was a revelation in the first-person shooter market, mixing intense action with a strong plot and unique visuals as you explored the underwater city of Rapture. Any question as to whether or not I was playing a transcendent title evaporated when my fiancée started regularly sitting down to watch me tackle splicers and Big Daddies — a scenario that never happened to any real extent before or since.

Now two-plus years later 2k is sending gamers back to Rapture for BioShock 2. The sequel looks to build on the original by adding a fully realized multiplayer mode to accompany a robust campaign while facing the daunting challenge of retaining Rapture’s “wow” factor — not to mention convincing the Mrs. to return for more video game watching.

In what was clearly an effort not to mess with what helped make the original so successful, BioShock 2 features a virtually identical control scheme, though the added ability to wield firearms and plasmids simultaneously has brought about a few changes. Your right hand holds your weapon and secondary items (such as a camera), which is then controlled by the right trigger (fire) and bumper — tapping the bumper cycles through your weapons while holding it down brings up a radial menu allowing you to directly select one. The left side gets the same treatment only with plasmids instead of weapons. It works very well and is a welcome improvement over having to switch back and forth between weapons and plasmids, allowing for some creative combinations when fighting waves of splicers.

Even in your fancy Big Daddy diving suit you’re still able to jump (Y) as well as uncork some devastating melee (B) attacks. The other two face buttons control multiple actions, such as X handling both reloading and hacking, and the A button searching objects. Each ranged weapon has multiple ammo types, which can be easily swapped with the d-pad. The select button provides access to an area map, as well as allowing you to track your progress researching enemies and your log of audio entries that you’ve found along the way.

One of the things that really made BioShock stand out in the oversaturated first-person shooter market was its artistic style. Rapture was amazingly detailed, favouring a 1950s look that was slowly decaying due to neglect and civil unrest. The city is once again the star visually, but the second go-round won’t be as awe inspiring simply because we’ve seen this world before, down to the same vending machines, health stations and items. Things look more polished, but it’s best described as incremental improvements.

While the environments remain largely unchanged, the variety and quality of adversaries has been elevated. That includes new types of splicers and a larger assortment of Big Daddies, but it’s the Big Sisters that take top billing on the enemy front. They look great and move with incredible quickness, creating some of the game’s most difficult battles.

BioShock 2 also follows in its predecessor’s footsteps on the audio front, delivering an excellent blend of vintage songs and mood-setting background music. It’s a testament to that music and the undeniable sense of claustrophobia you get being stuck on the ocean floor that the game can create some unsettling moments even as a heavily-armed juggernaut in a diving suit. The voice acting is another strong point, which is important since much of the story is told via audio logs found throughout the city. It’s an all-around strong effort.

The big question when discussing the story of BioShock 2 is whether to compare it to the original or against other shooters. The former seems to be the more natural comparison, but it’s also inherently unfair because BioShock was able to create Rapture’s history as it went along while featuring some excellent antagonists (Andrew Ryan, the founder of Rapture, and Atlas) and an awesome twist. That left BioShock 2 to tell a tale that, while interesting, feels tacked on in terms of the back story and simply can’t match the original’s depth.

Gamers will find themselves opposing Dr. Sofia Lamb, who was a philosophical adversary of Ryan during Rapture’s heyday and has taken control following Ryan’s demise. She makes for a worthy adversary, but she simply cannot measure up to Ryan or even Frank Fontaine. The basic premise here is that you were an experimental creation of the Big Daddy program, code named “Delta,” and you were assigned a Little Sister to protect a decade ago. For reasons that are shown early on you were not successful, and the game follows your quest to reunite with her, much to Lamb’s dismay.

Lamb’s influence over the inhabitants of Rapture is seen throughout the game as splicers, which generally avoided Big Daddies in BioShock, will now band together in an effort to thwart your quest. It’s a good move since so much of the city’s mystery was unveiled in your initial trip to Rapture, leaving an increased focus on combat for the sequel.

Combat has received some nice improvements, primarily the aforementioned ability to utilize your plasmids (these allow you to do things like shoot lightning bolts from your hand) and weapons simultaneously rather than having to switch back and forth. This not only makes things smoother but also enables more creativity when fighting enemies. It never gets old to set a cyclone trap on the ground, infuse it with an electrical charge and then pick off splicers as they hurl through the air after stepping on your trap.

The upgrade process has also been overhauled as each gun can now be upgraded three times. The first two will be things like increased power or capacity, but the third one (which can only be accessed after unlocking the first two) will grant a new ability. For instance, fully upgrading your drill will allow you to reflect projectiles back at attackers. Plasmids feature three levels as well and will add benefits the further you progress, such as the Dummy plasmid, which creates a clone to draw enemy fire. At Level One it’s little more than a distraction, but reach Level Three and it’ll be reflecting attacks while healing you.

Of course, these plasmid upgrades cost Adam, which is Rapture’s currency for genetic improvements (they use cash for things like ammo and health packs). You still obtain Adam from Little Sisters, but in your role as a Big Daddy you’re given the option to “adopt” them. Do this and you’ll be able to gather Adam from corpses. However, don’t expect it to be easy as setting her down will draw crowds of splicers and other foes, forcing you to defend her. Succeed and you’ll be rewarded with more Adam. It’s a challenging addition that allows for more upgrades, though it’s completely optional.

Whether you choose to do that or not you’ll eventually be given the option to save or harvest the Little Sister — it’s a moral dilemma: save them and receive less Adam or harvest (read: kill) them for more of the red stuff. This, along with choices involving the fate of Lamb’s lieutenants, shapes how things progress and ultimately determines which of the game’s endings you’ll see. All told you can expect to invest 10 or more hours into the campaign, assuming you don’t simply blitz through it.

The biggest addition to BioShock 2 is the multiplayer. Set during the Rapture Civil War, the multiplayer has some unique elements, such as hacking and setting traps, and it allows the use of plasmids and weapons. Much like the Call of Duty series you’ll unlock more powerful items as you progress. Things feel fairly balanced with the exception of the incinerate plasmid, which is so effective you’ll generally find everyone in a match using it. Things tend to run smoothly online, though you’ll see occasional lag and missing animations, usually doors that vanish rather than open.

BioShock 2 features seven modes with Rapture-themed takes on standbys like free-for-all, Team Deathmatch and Capture the Flag. There are currently 10 maps to choose from, which are rebuilt from locations seen in the original BioShock. That means fans of the original can check out places like Fort Frolic and Neptune’s Bounty before they fell into disrepair. There are even some storytelling elements to the multiplayer, which is a cool touch and helps differentiate it from other offerings.

Part of what made the original so special was the uniqueness of its setting along with a truly memorable story — two areas BioShock 2 cannot match. However, BioShock 2 is still an excellent first-person shooter that presents a superior combat experience to its predecessor. It’s not to be missed.

If you saw any pre-release footage of BioShock 2, you probably thought, “That looks like the original BioShock.” That’s more or less true, though it’s not necessarily a bad thing. In many respects, it’s the ultimate case of “If it ain’t broke, don’t fix it.”

The big difference between BioShock and BioShock 2 is that in the sequel, you actually play as a self-aware Big Daddy rather than a normal human. The problem is that these controls never fully immerse you in the world of being a Big Daddy. Your movements, even with the signature giant drill, all feel like someone painted a Big Daddy costume over a generic protagonist. Shooting, moving, using plasmids, much of this feels almost exactly the same, and even the plasmid selection is very familiar with a few new quirks put in there.

As a Big Daddy you come with Little Sisters, along with their quest for Adam. These side quests, while fruitful, tend to be repetitive and represent BioShock’s own form of RPG level grinding. I found myself looking at each area, counting the number of Sisters to be saved, and working to get that out of the way to maximize plasmid options before actually moving forward with the story. This is a player choice of course, but for me, the hunt for Adam wasn’t exactly fun or a grand part of the Rapture experience. Instead, it just felt like something that had to be done, and I’d rather get it all out of the way so I can progress the story without being interrupted.

Ah, yes, the story. It’s easy to say that Rapture was the first BioShock; without it, it would have been an above-average shooter with some magic elements. This integral part is as alive as ever, and the story brings a new element of decay to the world. This, along with some stellar set pieces that throw you (sometimes literally) into new areas, including outside of Rapture, pulls you into the underwater city. It’s very easy to lose hours looking for more audio recordings or exploring little bits of the city that feel like the theme park from hell.

And that, in the end, is what makes BioShock 2 a success. Rapture is so alive, so believable in its own insane way, that the combination of audio recordings, period art, and twisted cruelty overcome the lack of new game mechanics or innovations. What it does, it does well, and while this makes BioShock 2 feel more like an expansion pack with high production values, it’s a still a trip worth taking.

By Herija Green
This entry was posted on Sunday, February 21st, 2010 at 12:00 pm and is filed under Herija Green, Mike Chen, Video Game Reviews. You can follow any responses to this entry through the RSS 2.0 feed. You can leave a response, or trackback from your own site.