The Wire Troll: Diamond in the Rough 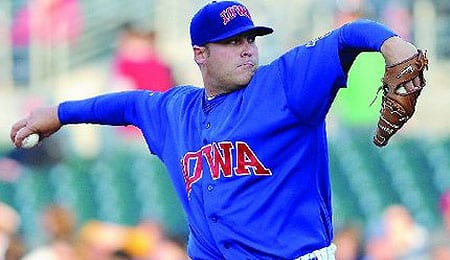 Thomas Diamond is the final member of the DVD trio to make the Show.

We’re now into the second week of August and for whatever reason, it’s looking like 2010 will be remembered as the year of the thumb. What’s up with that? John Buck and Kevin Youkilis both managed to end up on the DL last week with thumb issues, with Youkilis needing surgery that will cost him the balance of the season. It’s yet another tough injury for the BoSox in a season that’s become a series of health woes for them. Without further ado, let’s give this week’s waiver wire picks a look-see.

Thomas Diamond, SP, Chicago Cubs: About a half decade ago, the Rangers had a trio of fine young pitching prospects collectively known as DVD — John Danks, Edinson Volquez and Thomas Diamond. Well, the first two have already made good on their potential and now the last member of DVD, Texas’s 2004 first round pick Diamond, has finally made it to the Show as a Cub, filling the rotation slot of the recently traded Ted Lilly. In his debut, Diamond allowed seven hits and three free passes in six innings while striking out ten. The high strikeout potential (he was averaging almost one per inning at Triple-A) makes Diamond an intriguing prospect and worthy of a bid in NL-only formats.

Peter Bourjos, OF, Los Angeles Angels: When long-time centre fielder Torii Hunter is willing to make a move to right field to accommodate a player, you should take notice. Bourjos, ranked second on the Angel top-prospect list entering 2010, has done nothing this season to dispel that lofty billing. In 414 at-bats down on the farm, the 23-year-old hit 13 long balls, drove in 52 runs, stole 27 bases and managed a stellar .314 BA. The Halos are believers, and you should also be.

J.P. Arencibia, C, Toronto Blue Jays: Almost a month ago, I mentioned it might be time for the Jays to turn start looking at Las Vegas for some catching help and it took the aforementioned thumb injury to Buck for us to witness the debut Arencibia Saturday. And what a debut – possibly the single greatest in the history of the game! He smacked a two-run shot in his first at-bat and followed it up with a second big fly, going 4-for-5 all told with three RBI. He will be a very hot commodity this weekend and despite assertions by Toronto management that this is a temporary gig, really, how can the Jays deny this kid his due based on these early results?

Mike Minor, SP, Atlanta Braves: Let’s take a quick look at some numbers: this 22-year-old southpaw started the season at Double-A Mississippi and, in 82 IP, managed 103 strikeouts while posting a 3.84 ERA and 1.23 WHIP. He gets promoted to Triple-A Gwinett and, in 33 1/3 IP, ups his game a few notches and strikes out 37 with a 1.89 ERA and 0.93 WHIP. After Kris Medlen tore up his elbow, we’ll get to witness Minor’s MLB debut Monday. Get him rostered and active in all formats as you don’t want to be watching this debut from the sidelines. And unlike Jeremy Hellickson, who was only up for a spot start, Minor will stick around for at least three starts regardless of how well or poorly he does.

Chris Sale, RP, Chicago White Sox: Keeper alert! Sale, just 21, was selected in the first round in June and is the first of the class of 2010 to arrive in the bigs. In his short minor league career, the young southpaw has managed 19 strikeouts in only 10 1/3 IP. He’ll likely only be given a mop up role in middle relief this season, but the White Sox are looking at Sale for a rotation slot heading into 2011.

Other Options Worth Pondering

Mike Lowell, 3B, Boston Red Sox: The injury to Youkilis should guarantee an increase in playing time for Lowell until a decision can be made about how ready recently signed Carlos Delgado is.

Lorenzo Cain, OF, Milwaukee Brewers: An injury to Carlos Gomez has created an opportunity for Cain and, between Double-A Huntsville and Triple-A Nashville, he managed to swipe 26 bases while only being caught three times. He’s a decent speed option for the stretch run.

Mike Sweeney, 1B, Philadelphia Phillies: As an injury replacement for Ryan Howard, Sweeney is a temporary fix in NL-only leagues. The big question is does Howard return from the DL before Sweeney finds a way to get back on it?

Dan Johnson, 1B, Tampa Bay Rays: Johnson is worth a bid in AL-only leagues as he will be a probable platoon partner with Ben Zobrist until Carlos Pena returns.

Eric Young, Jr., 2B/OF, Colorado Rockies: Young has returned from a broken leg he suffered earlier this season and, in his past ten games at Triple-A Colorado Springs, has hit .342 BA with four thefts. This kid can fly, as evident by his 181 thefts over the past three seasons in the minors. Clint Barmes is what he is, meaning the opportunity for Young to pad those stolen base numbers could be right around the corner.

Kila Ka’aihue, 1B, Kansas City Royals: The Kila Monster has finally arrived. In 323 at-bats at Triple-A Omaha, Ka’aihue slugged 24 homers, drove in 78 runs and posted a great .322 BA. The Royals DFA’d Jose Guillen Thursday – in fact, the very day after RotoRob moaned about him — which indicates that they will be giving Ka’aihue ample opportunity to capitalize on his power potential down the stretch.

Carlos Delgado, 1B, Boston Red Sox: On Saturday, the Red Sox inked Delgado to a minor league deal in an attempt to bolster their offense at first base. It makes sense to give the once feared slugger a shot given that Youkilis is done for the year. Desperate times require desperate measures, but who knows? Maybe the old guy still has some sock left. It’s worth a gamble for both Boston and Fantasy owners to find out.

Josh Tomlin, SP, Cleveland Indians: I have absolutely nothing to add to the great review that our fearless leader wrote on Saturday except to mention that those of us playing in AL-only leagues should be taking note. Oh, never mind…he said that, too.

Ian Desmond, SS, Washington Nationals: The trade of Cristian Guzman guarantees that Desmond will get plenty of playing time down the stretch and he’s owned in only 34 per cent of CBS leagues. Shortstop is a bleak position this year, so it’s worth checking out your league waiver wire, just in case.

By Tim McLeod
This entry was posted on Sunday, August 8th, 2010 at 3:36 pm and is filed under BASEBALL, The Wire Troll, Tim McLeod. You can follow any responses to this entry through the RSS 2.0 feed. You can leave a response, or trackback from your own site.