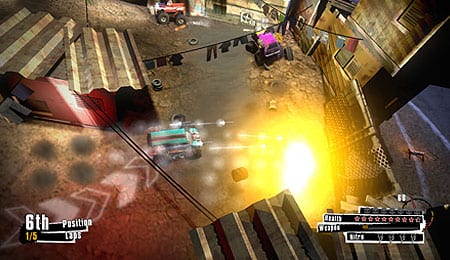 Tight quarters like these make for some intense vehicle battles.

Released in between Toy Soldiers and Perfect Dark as part of Xbox Live Arcade’s Block Party, Scrap Metal is a top-down racer that looks to mix driving action with heavily armed mayhem. Old school gamers may notice some visual similarities to RC Pro Am, though the destructive elements are more reminiscent of the Twisted Metal series. It’s an interesting marriage of styles, but does Scrap Metal strike the proper balance in bringing them together?

There are two available configurations. The first has you control all forward motion with the left analog stick, which feels similar to driving to a Warthog in Halo. It becomes counter-intuitive, though, when pushing back makes you turn around rather than just reversing, which is actually done by holding down the left trigger. Considering the frantic pace, it just feels out of place to add that extra control rather than keeping everything on the left stick.

It’s definitely the preferred option, though, as the “advanced” method has you operating the vehicle like a remote control car. The left stick is the steering wheel, and you now accelerate with the right trigger and brake with the left. What really makes this scheme unwieldy is that the game is constantly inverting the controls based on which direction your car is facing. That means pushing the stick to the right does two completely opposite things when you’re driving “up” the screen versus when you’re driving “down” it. It’s a mess.

You won’t find anything eye popping in Scrap Metal, but the game works some nice little details into the backgrounds and offers a colourful variety of vehicles to race in and/or destroy. Explosions, flames and gunfire all look solid, and annihilating the competition is satisfying. The lighting effects are probably the highlight visually, and they help liven up the relatively small tracks.

The characters you interact with favour a different art style entirely, and in fact look like they were taken directly from the Grand Theft Auto loading screens. It’s an odd choice, offering a stark contrast to the rather gritty looking tracks. I didn’t particularly care for it, but it doesn’t factor into the actual gameplay and can thus be easily overlooked.

Scrap Metal has pieced together a nice mix of metal tunes to supplement the on-screen destruction. It fits well with what’s going on and manages not to wear out its welcome. The sound effects are also good for the most part, though I did grow tired of hearing the whirring tires of airborne cars.

With eight different tracks and 61 total races/challenges, Scrap Metal gives a yeoman’s effort in creating a deep single-player mode. The game also mixes up your goals. Sometimes you’ll be asked to win a straight race with weapons disabled. Other missions have you trying to destroy a set number of vehicles. You’ll also run escort races and go one-on-one against bosses. It definitely helps to keep things fresh, but you may not find every game type to your liking.

It’s also not always clear what the game is asking you to do. For instance, one mission requires you to protect a truck loaded with explosive materials, but neglects to tell you that your “gun” is essentially firing first-aid packs. I probably failed the mission a half-dozen times trying to shoot the enemies before inadvertently hitting the truck I was protecting and healing it. I passed the mission the very next time. Discovering boss weaknesses can devolve into an annoying trial and error exercise as well.

As you move through the single-player game you’ll unlock any vehicle you destroy. However, you can only store four vehicles at a time in your garage, and if you swap one out you’ll lose any upgrades you made to it. This makes you plan your upgrades to avoid maxing out a car only to send it to the scrap yard. Thankfully you can replay past missions as often as you like and rack up 30 points per run (assuming you get first) so there’s no shortage of available points.

Each race gives you a bronze (10 points), silver (20) or gold (30) star based on where you finished or which goal level you attained. You only need to reach bronze to advance, which is nice as many races can be won more easily with better vehicles that you unlock as you progress. The game doesn’t allow you to race any car you want, though, as each one is given a level with races being restricted to a specific range. For instance, you can’t take a Level 6 monster truck and compete on the first track against much smaller cars.

The game is at its best when everything is in play and you’re tearing around the track while trying to gun down the competition. When it becomes a straight racing game some wonky physics (why can’t I stop fishtailing?) and the aforementioned control issues conspire to make it less engaging.

Scrap Metal also features online and offline multiplayer. This can be a lot of fun as most human players want to wreck one another, which pushes the racing elements to the back and emphasizes vehicular combat. Plus, if you’re short on people, the game fills out the races with bots. When I ventured online, things flowed smoothly with lag non-existent.

There is definitely fun to be had with Scrap Metal courtesy of hectic missions, solid online play and a cool upgrade system. However, there are enough issues, some at the fundamental level, holding it back from being a consistently enjoyable game.

It feels a bit steep at 1,200 MS points (US$15), though if you downloaded Perfect Dark and Toy Soldiers (along with the free Game Room), Microsoft will credit your account 400 points if you’re a Silver member, while Gold members also get a free month of Xbox Live.