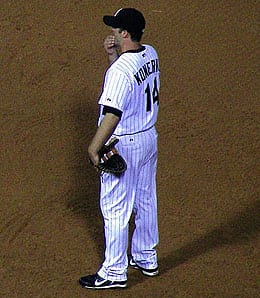 Don’t turn your back on Paul Konerko as a source of inexpensive long balls.

The 2010 RotoRob MLB Draft Kit is in full swing now. As we wonder if the tiff between Barry Zito and Prince Fielder will rage on into the season, let’s continue with our Top 10 Lists that Fantasy Owners Always Wanted But Were Afraid to ask For.

Chicks may still dig the long ball, but too many Fantasy owners take power production for granted, choosing instead to over-stock their rosters with the Jacoby Ellsburys, Bobby Abreus and Chone Figginses of the world. When their draft enters its final rounds, these speed-hungry owners find themselves staring at a team fleet of foot yet feeble of stick. Immediate action is needed, but the big-time sluggers are long gone, and the Fantasy budget is wearing paper-thin. What to do, what to do? Glad you asked.

Fear not, the poor man’s power brokers are here. The players profiled below should all be available in the later rounds – or for a mere pittance of coin – in most Fantasy drafts, yet each has the ability (or potential) to put a heaping helping of taters on your Fantasy plate. Don’t look for across-the-board production from this lot: power’s their game, and many will drag your team totals down in at least two categories – usually batting average and/or stolen bases. But hey, we’re bottom feeding here, remember? Nevertheless, that doesn’t mean there aren’t a few tasty morsels tucked among the muck. Appetizing, huh? Well, if the thought of grabbing a 30-homer guy at the end of your draft doesn’t get the Pavlovian juices flowing, you may want to find another game. Grab a bat – it’s bustin’ time.

1. Paul Konerko, 1B, Chicago White Sox: Throw out his injury-marred 2008 campaign, and Konerko has jacked at least 28 homers in each of his last five seasons. It may surprise you to know that he is only 34 years old, so there’s almost certainly some gas left in his tank. Konerko plies his trade in a hitters’ park, and bats in the middle of a decent lineup, so the ribbies should be there as well. Don’t let his 2008 injury scare you away; Konerko has played at least 151 games in seven of his last nine seasons. The depth at first base this year is causing Konerko to fall a long way in many Fantasy drafts, so his potent bat should be available at a bargain basement price.

2. Nick Swisher, OF/1B, New York Yankees: Swisher’s first season in the Bronx was a success, as he smacked 29 homers and posted an OPS of 869. The switch-hitter has averaged 27.5 bombs over the last four seasons, and if he can learn to take advantage of the infamous Yankee Stadium right field porch, he could easily launch 30-plus dingers in 2010. Swisher’s perennially low batting average is offset by the fact that his razor-sharp eye helps him rack up a ton of walks and beefy OBP numbers. Keep that in mind if your league uses OBP and/or OPS as a stat cat.

3. Adam LaRoche, 1B, Arizona Diamondbacks: LaRoche has averaged just under 26 homers and 87 RBI over the past four seasons, but has escaped the notice of most Fantasy managers. He should bat in the middle of the D-Backs’ order, and the 30-year-old first sacker is a safe bet for another line in the .270-25-85 range. Chase Field is a very hitter-friendly yard, but only so-so when it comes to home run production. If LaRoche goes undrafted in your league, or is drafted then dropped, consider picking him up in mid-season – as both his career batting average and home run rate are typically much better in the second half.

4. Ryan Ludwick, OF, St. Louis Cardinals: Ludwick’s numbers took a nose-dive in 2009, plummeting from .299-37-113 in 2008 to a relatively meek .265-22-97 last season. There is reason for hope, though – as new Cardinals’ hitting coach Mark McGwire is already drawing rave reviews from Ludwick. No matter Big Mac’s effect, the fact remains that Ludwick should garner plenty of ribbies batting behind Albert Pujols and Matt Holliday – and a return to 30-plus dingers is a very real possibility. The departure of Rick Ankiel should result in more playing time for Ludwick this season, and hopefully he can parlay those extra at-bats into some Fantasy power production. Don’t wait too long on Ludwick; he and Konerko are the two players on this list who will be drafted in just about every Fantasy league.

5. Edwin Encarnacion, 3B, Toronto Blue Jays: After blasting 26 homers in 2008, Encarnacion opened the ’09 season in a terrible slump – then suffered a chipped bone in his wrist in late April. The Reds dealt him to Toronto at the trade deadline, and Encarnacion responded by batting .274-7-20 in 95 at-bats in September and October. He underwent surgery for a bone spur in his wrist during the offseason, and is slated to open the season as the Jays’ starting third baseman. There is risk to drafting Encarnacion, but if he can stay healthy and focused, your draft day leap of faith could reward you handsomely. Don’t expect more than mediocre batting average numbers from Encarnacion, but a run at 30 homers is a definite possibility.

6. Garrett Jones, OF/1B, Pittsburgh Pirates: Jones had spent over a decade bouncing around the minors, but did he ever take advantage of the opportunity afforded him last season by the woeful Pirates. When the dust had settled, Jones had stunned the Fantasy baseball world by slugging 21 home runs, batting .293 and swiping 10 bases – in just 82 games. As the 2010 season looms, Jones is penciled in as the Buccos’ everyday right fielder, and everyone wonders, “Can he do it again?” If you have a bit of riverboat gambler in you, grab Jones late in your draft and hope that the bloom isn’t off the rose. There’s reason to believe: Jones batted .309 last September, and showed no signs of slowing down despite the fact that he was no longer an “unknown.” The power should still be there this season, and if Jones keeps running that’s just icing on the cake.

7. Troy Glaus, 1B, Atlanta Braves: Two words: “If healthy.” When Glaus is on the field, he’s capable of some big-time power numbers – as shown by his .270-27-99 line with St. Louis in 2008, and average of nearly 31 bombs per season between 2005 and 2008. He underwent right shoulder surgery in January 2009, and didn’t make it onto the field until September of last year, appearing in just 14 games. The move to first base should help protect Glaus’ fragile body, and indeed, he seems in fine fettle so far this spring. Expect one dinger every 20 at-bats or so from Glaus, but have a back up plan in place if he succumbs to the injury jinx again.

8. Cody Ross, OF, Florida Marlins: Ross has quietly – which is the way baseball-related things happen in south Florida – averaged 23 home runs and 82 RBI over the past two seasons, and he should at least match those numbers as the Marlins’ regular right fielder in 2010. The Marlins don’t figure to be an offensive juggernaut this season, but if young Cameron Maybin can fulfill his potential and Chris Coghlan continues to develop, there should be a few ducks on the pond for Ross.

9. Kevin Kouzmanoff, 3B, Oakland Athletics: Kouzmanoff possesses outstanding power, but has played his home games the past three seasons at PETCO park – where long fly balls go to die. Small wonder that the .261 career hitter owns a meager .239 career average at PETCO – though he has managed to average just under 20 homers and 82 RBI the past three seasons. While Oakland Coliseum isn’t exactly a hitter’s paradise, Kouz is 5-for-12 (.471) lifetime in his new home yard. The A’s will look to Kouzmanoff to provide some punch to what looks like a classic small-ball lineup this season, and he could very well lead the team in both homers and RBI.

10. J.J. Hardy, SS, Minnesota Twins: If you need some late-round pop out of your middle infielder’s spot, take a chance on the former Brewer, who smacked 50 homers between 2007 and 2008. He had a disastrous 2009 season, but his new digs in Minnesota could mean a revival for Hardy, who finished second among big league shortstops with 24 homers back in 2008. Draft Hardy late for his home run punch, and count it as a bonus if his batting average returns to the .280-ish levels of his glory days.

By Buck Davidson
Tags: 2010 MLB Draft Kit, MLB, MLB Draft Kit
This entry was posted on Friday, March 5th, 2010 at 12:32 pm and is filed under 2010 RotoRob MLB Draft Kit, BASEBALL, Buck Davidson, Top 10 lists. You can follow any responses to this entry through the RSS 2.0 feed. Both comments and pings are currently closed.