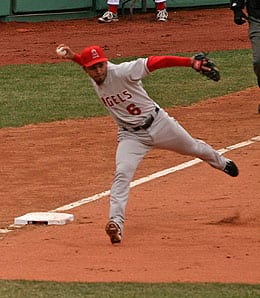 Don’t discount Maicer Izturis just because he doesn’t have a full-time job.

The 2010 RotoRob MLB Draft Kit continues today as we launch into our always popular Top 10 Lists that Fantasy Owners Always Wanted But Were Afraid to ask For. We’ll kick it off with a look at the Top 10 Utility Players — those who may not have a full-time gig, but can still be extremely useful Fantasy assets.

1. Maicer Izturis, Los Angeles Angels (.300, eight HR, 65 RBI, 74 R, 13 SB in 387 AB): With Erick Aybar having claimed the starting shortstop position and Brandon Wood being penciled in at the hot corner, Izturis figures to be the team’s top option off the pine. The diminutive switch hitter has an ideal approach at the plate for a part-time player as he makes consistent contact and offers a surprising amount of pop. His speed is another nice perk for Fantasy owners, as is the presence of frequent DL resident 2B Howie Kendrick ahead of him on the depth chart.

2. Juan Uribe, San Francisco Giants (.289, 16 HR, 55 RBI, 50 R in 398 AB): The free-swinging Uribe figures to reprise his role as the super sub in San Francisco this season, serving as the team’s primary backup behind SS Edgar Renteria and 2B Freddy Sanchez. He’s always been a streaky hitter, but when he’s on he can put the ball into the seats. It’s his power that really distinguishes him from both Renteria and Sanchez (12 combined HR in 917 AB last year), which is something in short supply in the middle of Bruce Bochy’s lineup. He’ll also spell 3B Pablo Sandoval and will qualify at third base, but he doesn’t produce enough to be a viable option there.

3. Jerry Hairston Jr., San Diego Padres (.251, 10 HR, 62 R, seven SB in 386 AB): Much like Uribe, Hairston figures to be the No. 2 guy at three different infield positions for an offensively-challenged team. Considering that batting luminaries SS Everth Cabrera and 2B David Eckstein are the nominal starters, Hairston should see plenty of opportunities to play. The veteran will also help cover the outfield, which features its own impotent performers like CF Tony Gwynn Jr., who has perhaps the least powerful bat in the majors. Injuries are always a concern with Hairston, but it’s hard not to like his positional eligibility and opportunity for playing time.

4. Melvin Mora, Colorado Rockies (.260, eight HR, 48 RBI, 44 R in 450 AB): We’re staying in the NL West for our third straight utility player with Baltimore’s long-time starting third sacker transitioning into a reserve role. Despite playing almost exclusively third base since 2004, Mora does have experience at second base, shortstop and the outfield. He’s unlikely to see enough action behind SS Troy Tulowitzki to qualify, but he’ll likely gain eligibility at the other spots quickly. Considering 3B Ian Stewart hit just .178 against southpaws last year there should be chances for Mora to make his mark. He’s 38 and coming off a sub par season, but don’t be too quick to overlook him because, (a) he posted a .285-23-104 line in 2008; and (b) he’ll be playing in Coors Field.

5. Alberto Callaspo, Kansas City Royals (.300, 11 HR, 73 RBI, 79 R in 576 AB): The 26-year-old infielder was an everyday player last season, and while he more than held his own at the plate, his defense (17 errors and dead last at minus-19 in the fielding bible) was brutal. That prompted the Royals to make a move for 2B Chris Getz, who is expected to become the new starter. However, considering the Royals aren’t exactly an offensive juggernaut, manager Trey Hillman should still find ways to get Callaspo’s bat into the lineup. He’s already played five different positions in the majors and could provide a versatile bench option for Fantasy clubs.

6. Reid Brignac, Tampa Bay Rays (.278, six RBI, 10 R in 90 AB): If you’re looking for a part-time player with upside look no further than Brignac, who has been ranked among the Rays’ top five prospects by Baseball America for three years running. He’s hit .281 in the minors with solid speed and power. Right now it looks as though Ben Zobrist, last season’s standard bearer for utilitymen, will start at second, but there could be some shuffling with Brignac seeing increased at-bats. Of course, he could also end up back in Durham.

7. Eric Hinske, Atlanta Braves (.242, eight HR, 25 RBI, 31 R in 190 AB): The former AL Rookie of the Year posted forgettable numbers last year, but bear in mind he spent much of the season coming off the bench for the World Champion Yankees. Conversely, in 2008 when he got 381 at-bats he clubbed 20 home runs and swiped 10 bags. It’s all about opportunity with Hinske, who could certainly see quite a few at-bats considering he’s set to back up 3B Chipper Jones and 1B Troy Glaus in Atlanta this season. Jones has missed an average 37 games per season over the last five years, while Glaus appeared in only 14 games in 2009. I smell sleeper.

8. Ryan Roberts, Arizona Diamondbacks (.279, seven HR, 25 RBI, 41 R in 305 AB): Roberts gives maximum effort when he’s on the diamond and has the perfect grinder mentality to come off the pine and be successful. Arizona’s new second baseman, Kelly Johnson, is coming a terrible season and is by no means a lock to rebound to his 2008 form. The team also has injury-prone Conor Jackson penciled in as a starter, and the perennially streaky Adam LaRoche set to play first base. Roberts’ attitude and solid all-around game should get him on the field, making him an option in large leagues.

9. Joaquin Arias, Texas Rangers (.266, five HR, 52 RBI, 63 R, 24 SB in 504 AB @ Triple-A): With the Rangers advancing top prospect SS Elvis Andrus to the Show last year, management decided to bring in veteran Omar Vizquel to mentor the rookie, leaving Arias in Oklahoma City. However, Arias hit .291 in a 32-game trial run with the Rangers in 2008, and is a lifetime .286 hitter in the minors. He’s also got the speed (138 steals) to put pressure on opposing pitchers and infielders. Now that Khalil Greene has been released, Arias should be given every chance to be the team’s top backup. The Rangers have a dependable infield in place, though, which makes Arias more of a flier at this point.

10. Bobby Crosby, Pittsburgh Pirates (.223, six HR, 29 RBI, 35 R in 238 AB): Everyone deserves a second — or in this case, a 27th — chance. Once a highly-touted A’s prospect, Crosby has underwhelmed in every conceivable way. His body has utterly failed him as he’s appeared in over 100 games just once since his rookie year, and his career BA of .238 is ugly. Still, somewhere in there lurks the talent that made Peter Gammons, one of the most respected baseball pundits out there, once select him as his choice to be the AL MVP. Right now Crosby’s penciled in as the top reserve infielder in the Steel City, but who knows? Maybe this is the year he puts things together now that he’s finally free of the media scrutiny in Oakland…or maybe not. At the very least he’s a more interesting choice to round out the list than steadier options like Craig Counsell, Julio Lugo and Jeff Keppinger.

By Herija Green
Tags: Los Angeles Angels, Maicer Izturis
This entry was posted on Thursday, March 4th, 2010 at 11:34 am and is filed under 2010 RotoRob MLB Draft Kit, BASEBALL, Cheat sheets, Herija Green. You can follow any responses to this entry through the RSS 2.0 feed. Both comments and pings are currently closed.