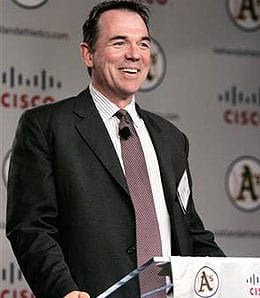 We’re back with the final part of our review of the first round of the 2001 MLB Draft. You can find previous parts here: One, Two, Three , Four and Five.

The Skinny: Bonderman was made famous in Michael Lewis’ Moneyball, which recounted Oakland General Manager Billy Beane throwing a major shit fit when the A’s drafted Bonderman, then only a high school junior, with their second first round draft pick. Bonderman sported a dynamic fastball the reached the upper 90s as well as a plus slider that could buckle the knees. Oakland shipped Bonderman to the Tigers in 2002 in a three-team deal that netted them Ted Lilly and a couple of prospects. Despite going 6-19 in his rookie season in 2003, Bonderman showed enough that many scouts predicted great things for years to come. It has yet to happen as his stuff has never translated into wins or a sub-4.00 ERA. Bonderman suffered through an injury-plagued 2009 and missed most of the season. He’s expected to slide into the fourth starter role for the Tigers this year.

Weaknesses: Bonderman’s stuff has never translated into big league success. It seems he’s more of a thrower than a pitcher and he has occasionally endured breakdowns in his command.

Final Analysis: Although he was rushed to the majors, scouts tend to think Bonderman should have experienced more success than he has (59 wins in seven seasons, with an ERA periously close to 5.00). He will likely slot in as the fourth starter in the Tiger rotation this year and he’s still young enough (27) to carve out a successful career. While Mark Prior (despite his injury issues) is the pitching jewel of the first round, Bonderman probably ranks second in terms of success, which goes to show you how poor this draft class was for pitchers.

The Skinny: Horne never signed with the Indians, preferring to take his talent to the University of Mississippi and then the University of Florida instead. Horne probably cost himself a lot of money as he had Tommy John surgery in college and ended up falling all the way to the 11th round, where the Yankees grabbed him in 2005. We’ll learn more about Horne when we get to our 2005 draft recap.

The Skinny: Pope signed the smallest contract of any 2001 first round draft pick, inking a deal for $900,000 — less than slot money – perhaps hinting at a pre-draft deal. Nevertheless, the kid had some talent with a good fastball and changeup to go along with impeccable control. Unfortunately, the injury bug struck and Pope missed half the 2002 season recovering from elbow surgery. Upon his return, he lost plenty of velocity off his fastball and had trouble pitching deep into games. After he was traded to the Yankees in the Sterling Hitchcock deal in 2003, Pope was converted into a reliever, a role in which he experienced some success as a closer but he was never really viewed as a serious prospect in the Yankee organization after ranking among the Cards’ best prospects for a couple of years. After signing a minor league deal with the Phillies and pitching in their organization in 2008, Pope retired from baseball as a player and accepted a job as coach in the Yankee system.

Strengths: Pinpoint control and the ability to limit baserunners.

Weaknesses: Injuries doomed his career almost from the get-go, and he had trouble with the long ball – especially during his two brief runs at Triple-A.

Final Analysis: Despite his minor league success as a closer (52 saves at Double-A between 2005 and 2006), Pope’s stuff wasn’t dynamic enough for the Yankees — or any other team, for that matter — to give him a look as a middle or long reliever. If arm trouble hadn’t robbed him those few miles per hour off his fastball, Pope’s career might have included a stop in the majors. As it is he’s yet another hurler lost to injuries and another reminder of how tenuous a process it is to develop pitching.

The Skinny: Burrus was your classic tools player; unfortunately, the guy couldn’t hit (his career BA as a professional is under .250). As an Atlanta-area native, he was well scouted by the Braves, but even as he was drafted there were questions about whether the kid would ever show enough with the stick. It turns out those concerns were well founded. Try as they did, the Braves couldn’t hone Burrus’ tools into anything resembling a baseball player. To wit, he spent almost three full seasons in the Rookie League before finally advancing to A-Ball. Burrus did get a taste of Triple-A in 2005 (ironically, hitting better there than any other stop in his career, albeit in a tiny sample size), but by 2008 Atlanta had given up on him, forcing him to play Independent Ball for the past two seasons.

Strengths: Burrus was a great athlete with incredible tools.

Weaknesses: Burrus simply couldn’t hit. Even including his two solid years in Indy ball (OPSs of 776 and 796), his career OPS is under 700 thanks to some awful contact rates.

Final Analysis: Burrus just never developed. He showed good speed, but you can’t steal first. Even though he’s still just 26, his career is just about over. He might hang around the Independent Leagues for a few years, but that’s probably as good as it’s going to get. Burrus is a classic tools bust.

The Skinny: Lowry wasn’t a particularly highly regarded prospect based on his average stuff. Working in his favour was the fact that he was left handed and could throw four pitches for strikes – the best of which was a changeup. He also had a curve, slider and fastball. Despite his low regard among scouts and those who rate prospects (he never cracked Baseball America’s Top 10 Giants prospects), Lowry rocketed through system and made his major league debut in 2003. In 2004 he recorded a 3.82 ERA and went 6-0, breaking the team record for consecutive victories to begin a career. He followed that up with a 13-13 campaign in 2005. His impressive performance prompted the Giants to give him a four-year, $9.25-million contract. However, that turned out to be a bad deal for San Francisco, as injuries started popping up hampering Lowry’s effectiveness in 2006 and to a smaller extent in 2007. He missed the 2008 and 2009 seasons with forearm, wrist and shoulder injuries. Lowry claims the Giants misdiagnosed the injury and subjected him to unnecessary wrist surgery which jeopardized his career. The Giants finally cut bait with him in October 2009. Now a free agent, Lowry is trying to revitalize his career, working out for various teams. But even the Pirates – who could sure use the help – weren’t interested in attending Lowry’s workout. The Dodgers are reportedly interested in Lowry, as are the Padres, so you have to figure some team will hope a minor league deal could pay off with him becoming an innings eater, if nothing much else.

Weaknesses: Lowry’s lacks eye-popping stuff and he has always had struggles with runners in scoring position (.274 career BAA ).

Final Analysis: Lowry will have to show some team that he’s recovered from his injury problems. He can probably get a minor league deal – especially considering how cheap he’d come — but it will be a long road back to the majors after two years of inactivity. Lowry was one of the best bargains in the first round and gave some immediate returns. However, the Giants didn’t get much from the $9 million investment they gave him following his early success. If San Francisco did misdiagnose Lowry’s arm problem and kill his career, then the $9 million is poetic justice.

NEXT: We will review the remainder of the 2001 MLB Draft, taking a look at some of the gems and bombs after the first round.

By Todd Habiger
This entry was posted on Wednesday, January 20th, 2010 at 11:41 am and is filed under BASEBALL, Draft report, Todd Habiger. You can follow any responses to this entry through the RSS 2.0 feed. You can skip to the end and leave a response. Pinging is currently not allowed.