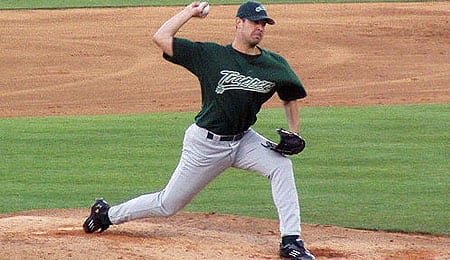 Josh Karp topped out at Triple-A for the Expos/Nats, making him a colossal bust as the sixth overall pick in 2001.

It’s been a couple of years since we’ve done an edition of our MLB Draft Review series. When we last left off, RotoRob had started previewing the 2001 draft, the first part of which you can find here. Over the next few parts of this series, I’ll be previewing the rest of this draft through the first round as well as looking at some other notables that came out of that class.

The Skinny: Karp was a hard-throwing righty who left his mark on the UCLA record book ranking fifth in wins and sixth in strikeouts after three seasons with the Bruins. Sporting a fastball that consistently reached the mid-90s, along with a plus curveball and changeup, Karp looked like a nice pick at six. Unfortunately, his stuff never translated into professional success. His first year of pro ball was solid as he split time between High-A and Double-A and looked to be on the fast track to the Expo rotation. However, Karp never again experienced professional success after that first year. He struggled with his control and never learned to use his three-pitch arsenal to his advantage. By 2006, he was out of baseball because of arm problems.

Strengths: Three plus pitches, including a fastball consistently in the mid-90s.

Weaknesses: Pitch location and selection and over reliance on his change up. Scouts also questioned his mental toughness and makeup.

The Skinny: Smith signed with the Orioles almost immediately after they drafted him out of Cumberland University, but he didn’t make his professional debut until several weeks later. In 2006, Smith claimed that an Oriole trainer injured him during a workout, pretty much derailing his career before had a chance to get started. Before the injury, Smith sported a 90 mph fastball. Afterwards, he was wild, walking 21 batters in 11 innings in 2002 before being shut down. Smith missed 2003 and most of 2004 with a shoulder injury. In 2005, he was released by the Os and tried his hand at Independent ball with no success. By 2006, his career was over.

Strengths: Smith was a lefty with a 90 mph fastball, always a coveted commodity.

Weaknesses: Wildness. This may have been a result of his injury, but nevertheless, Smith had trouble finding the plate during his pro career.

Final Analysis: After it became evident that local boys Mark Teixeira and Gavin Floyd wouldn’t be around for the Orioles at number seven, the team more than likely agreed to a pre-draft deal with Smith. It was money they might as well have flushed down the toilet as Smith gave them absolutely no return on their investment. The Smith pick was just another in a long line of first round failures for the Orioles and part of the reason they have failed to keep pace with division rivals, New York, Boston and Tampa, teams that have drafted well. Having said that, the Orioles have shown some improvement in this area in the later part of this decade, so we’ll see how that plays out.

The Skinny: The Pirates shocked everyone when they selected VanBenchoten as a pitcher out of Kent State. The righty was the Golden Eagles’ closer, but was more highly regarded for hit bat. He led Division I with 31 homers in his junior year and most teams viewed him as a prototypical right fielder. VanBenchoten made the Pirates look good early though as he rose steadily through the minor league system, pitching in the 2003 Futures Game, before making his big league debut in 2004. Unfortunately, his career was derailed in 2005 when he went under the knife to repair torn labrums in both arms and a torn rotator cuff in his left (non-pitching) arm. In limited chances in 2007 and 2008, VanBenchoten couldn’t duplicate his minor league success with the major league club, recording a 9.20 ERA in 26 games, 19 of them starts. He became a free agent after the 2008 season and signed with the Chicago White Sox, for whom he was ineffective in a swingman role for their Triple-A club.

Strengths: A 90 MPH fastball and a plus curve. He also has a change up and slider in his arsenal.

Weaknesses: VanBenchoten mostly pitched as a reliever at Kent State, so stamina was a big deal as the Pirates tried to make him a starter. His delivery had a tendency to be inconsistent.

Final Analysis: VanBenchoten might eventually make it as a long reliever in the majors, but more than likely he’ll just be organizational depth. He follows a long line of Pirate first rounders that haven’t made a big league impact. Pittsburgh hasn’t had a winning season since Barry Bonds left town years ago and the farm system hasn’t produced an impact player since. One might wonder, however, how VanBenchoten’s career might have gone if he had been selected as a position player. Rick Ankiel, anyone?

The Skinny: Scouts were mesmerized by Griffin when he became the first high school pitcher to hit 100 mph. Blinded by the velocity, scouts ignored the other factors in Griffin’s game, most notably that he couldn’t pitch worth a lick. It didn’t matter as the Royals grabbed him with the ninth pick hoping they could tame this wild Colt. Despite his blazing fastball and a plus slider, Griffin couldn’t find the strike zone. He led the minors in walks in 2003 while uncorking 23 wild pitches. Coaches worked to tone down his violent delivery and Griffin dialed down his velocity in order to gain more control. He topped out at Double-A in 2005 and underwent major shoulder surgery. Griffin decided to retire rather than try to come back.

Strengths: Duh! A 100 mph fastball. He also had a good slider.

Weaknesses: Control. The kid had none, averaging a shocking 6.9 walks per nine innings in his five seasons in the minors.

Final Analysis: Griffin was the ultimate boom or bust player. Salivating over his heater, teams ignored every other aspect of his game and hoped to catch lightning in a bottle. Griffin’s unwillingness to attempt a comeback from shoulder surgery says much about his desire. He just took his $1.85 million signing bonus and went home. Griffin was the fifth straight pitcher the Royals picked in the first round, none of whom ever fulfilled their promise. Not a single one made it as starters and thus crippled the low-budget Royals’ chance to assemble a talented homegrown rotation. It’s worth noting from a timely perspective, that Baseball America writer Jim Callis, in a recent chat, uttered Griffin’s name when making a comparison of the skill set of current hyped prospect Aroldis Chapman. Just some food for thought for you when considering the Cuban this spring.

The Skinny: An All-American out of Tennessee, Burke looked like he was going to be a future table setter for a long time for the Astros. In the minors, he showed the ability to get on base and steal one if necessary. Although he started out as a shortstop, Burke lacked the arm to stay there and moved over to second. He made the Astros’ Opening Day roster in 2005, but got demoted after a month. Burke was recalled in June and split time between 2B and the outfield, hitting only .248. The highlight of Burke’s career came in the divisional playoff series against the Atlanta Braves when he hit a series ending home run in the 18th inning to propel the Astros into the next round against the St. Louis Cardinals. Burke received a little more than 300 at bats in each of the next two seasons, but failed to win consistent playing time. He was eventually traded to the Arizona Diamondbacks in 2008 in the deal the netted the Astros Jose Valverde. Burke was little more than a utility player with the D-Backs and was non-tendered after the season. He wound up in the Padre system, but was traded to Seattle in Spring Training earlier this year. Less than a month later, San Diego reacquired Burke, but he was completely ineffective in a part-time role and outrighted to Triple-A in June. He refused the assignment and wound up signing a minor league deal with the Braves and spent the rest of 2009 toiling for their Triple-A team, putting up a .285/.351/.401 line in 274 at bats.

Strengths: Burke is a good athlete with speed. He showed a solid bat in the minors, with a career OPS of 786.

Weaknesses: Burke lacked the arm strength to stick at shortstop. He was also unable to adapt to major league pitching, recording a career OPS of 674 in parts of six seasons.

Final Analysis: Now 29, Burke is little more than a backup utility player at this stage in his career. He can play 2B and SS as well as in the outfield if needed. Burke can offer some speed off a Major League bench, but has really done nothing to show he has much value with the bat. His early minor league career suggested he could be a solid MLB lead-off hitter (at Triple-A in 2004, for instance, he had a . 396 OBP with 37 steals), but that never happened. Whether it was a lack of ability or lack of consistent at bats, we’ll probably never know. What we do know is that when Burke has been giving opportunities, he hasn’t taken advantage of them. As the Astros have long drafted near the bottom of the first round, failing with a top 10 pick hurts, especially considering Houston hasn’t drafted well at all. Their lack of minor league talent is evident as the Astros sink into second division status.

By Todd Habiger
Tags: MLB
This entry was posted on Tuesday, November 17th, 2009 at 8:39 pm and is filed under BASEBALL, Draft report, Todd Habiger. You can follow any responses to this entry through the RSS 2.0 feed. Both comments and pings are currently closed.