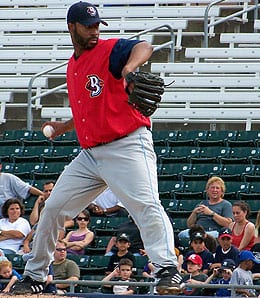 Kenny Baugh had to pitch in Indy leagues before the Astros rescued him and brought him back to organized ball.

We continue our review of the 2001 MLB Draft today, with a look at picks 11 through 15 of the first round. You can find previous parts here: Part I and II.

The Skinny: Baugh was taken out of the pitching factory known as Rice University, as Detroit ignored the high pitch counts he endured in college. Early on the move looked good as it appeared Baugh would rocket through the Tiger minor league system and join the major league rotation in very short time. He didn’t get the radar gun excited, working in the low 90s, but he knew how to pitch and had excellent command of his fastball and curve to go along with a nice changeup. While Baugh didn’t have the stuff of a top-of-the-rotation starter, he looked like he would slot in nicely in the middle of the rotation. Unfortunately, he tore a labrum in his shoulder and missed the 2002 season. Baugh worked his way back from surgery, recapturing his old velocity, but not his old results. He’s been languishing in the minor leagues ever since (although he spent part of both 2008 and 2009 in Independant Ball), pitching this year in the Astro organization. He’s now a minor league free agent.

Strengths: Baugh is an intelligent pitcher with control of three average pitches.

Final Analysis: The failure of Baugh and 2003 first rounder Kyle Sleeth didn’t scare Detroit away from taking pitchers high as it grabbed a couple of good ones in Justin Verlander and Rick Porcello the past few years. In hindsight, the Tigers probably should have been more concerned about Baugh’s pitch counts at Rice and shut him down that first season. He has never pitched beyond Triple-A and at this point, Baugh lacks the stuff to get major league teams excited, but with his smarts and command (which, by the way, has been fading) he has carved out a decent career as a minor leaguer, authoring 46 wins in seven minor league seasons to date.

The Skinny: Jones was drafted out of a Phoenix high school as a flame throwing righty. His fastball reached the mid-90s and scouts raved about his picture perfect mechanics. Jones looked like he was going to rocket through the Brewer system, reaching Double-A in 2003. Despite the success he enjoyed in his first three seasons, Jones’ picture perfect mechanics abandoned him and his throwing motion became all fouled up. Whether it was the result of bad coaching or trying to do too much, Jones’ poor mechanics haunted him as he needed major shoulder surgery that caused him to miss the 2004 and 2005 seasons. Early in 2007, Jones again needed surgery, this time of the Tommy John variety. He came back in 2008, but was no longer the same pitcher. His fastball lost several miles per hour and now tops out at about 90. He also struggles with his control.

Strengths: Jones has a good fastball, plus curve and good mechanics.

Weakness: Jones’ sudden loss of mechanics and his inability to stay healthy.

Final Analysis: Like so many young pitchers, Jones was bitten by the injury bug and has struggled to overcome that. At this point, the selection of Jones with first rounder was among the Brewers’ worst decisions in recent years. He became a minor league free agent this winter, so his future is up in the air. Jones has shown a lot of desire and toughness in coming back from his injuries, even though he invested his $1.825 million signing bonus wisely and is taken care of for life. He’s only 26 and finally made it to Triple-A this year (albeit, with very poor results), so may find a home as a middle reliever or back of the rotation starter at some point.

The Skinny: Kotchman was an easy find for the Angels as his father Tom was a longtime scout for the club. It wasn’t just a courtesy pick, however, as Kotchman was a legitimate first round talent. He was one of the best hitters available in the draft with a classic fluid left-handed swing. Injuries plagued Kotchman throughout his minor league career, most of them fluke accidents. In his second season with the big club in 2005, he looked like he was ready to become a major star when he cranked seven homers in 126 at bats. However, in 2006 bad luck continued to haunt Kotchman as he was set to be the team’s everyday but was struck down mononucleosis that sapped his strength and ruined his season. Though scouts thought he would develop 20+ homer power, Kotchman hasn’t been able to approach that level in the majors (career high of 14), nor has he translated his swing into a .300 average. He was one of the key players in the deal that brought fellow 2001 draftee Mark Teixeira to the Halos in 2008. However, Kotchman failed to impress the Braves and they sent him to Boston just a year later in a deal that returned Adam LaRoche to Atlanta.

Strengths: Kotchman has a fluid swing, is a good contact hitter who avoids strikeouts and is a slick fielder — in fact, he’s one of the best fielding first basemen in the game.

Weaknesses: Kotchman lacks power at a position that expects it. He has also been unable to translate his swing into a consistent .300 average (his career BA is currently .269)

Final Analysis: Kotchman never developed like the Angels hoped, and that necessitated the trade for Teixeira. The subsequent loss of Teixeira to free agency last winter was softened by the emergence of Kendry Morales this season. Meanwhile, Kotchman can can probably still find a home as a regular on a small market team desperate for the first baseman, but it doesn’t look like he’ll ever be the star he was projected to be. (There’s a rumour that Boston will try to pry Adrian Gonzalez away from the Padres, and would send Kotchman to San Diego as part of the return.) At the very least, Kotchman can carve out a career as a left-handed bat off the bench and a late inning defensive replacement. There’s still some time for him to change this outlook and enjoy a nice run, but there’s nothing to indicate he’s on the cusp of any such breakout.

The Skinny: The Padres had to be thrilled when Gautreau fell into their laps at pick 14. Rated as one of the top college hitters of the draft class, Gautreau looked to have classic corner infielder power. His career was derailed early when he developed ulcerative colitis in 2002 that sapped him of his strength and bat speed. The Padres were also set at first and third with Phil Nevin and Sean Burroughs and tried moving Gauteau to second base. Perhaps due to his colitis, he never regained his power stroke and struggled with injuries (including more intestinal problems and skin cancer) throughout his career.

Strengths: Gautreau had a good power bat coming out of college, having smoked 37 dingers in his last two seasons at Tulane.

Final Analysis: After having some modest success playing in Indy Ball in 2008, Gautreau packed it in and went back to his alma mater in 2009, joining the Tulane Green Wave as an assistant coach. His development as a player never had a chance because of his ulcerative colitis. It also didn’t help that the Padres jerked him around by playing him at multiple positions instead of having him concentrate on finding his groove as a hitter. He’ll go down as bust, another in a series of misfires the Padres have suffered with recent first round picks — most of which have endured health problems or off the field issues.

The Skinny: Gross was the starting quarterback at Auburn, but gave all that up after the Jays selected him 15th overall. An incredible athlete, Gross had scouts salivating about his tools. He came from good stock, as his father was an NFL lineman in the ’70s and his brother played football at TCU. Conventional wisdom was that Gross would develop into a power hitting corner outfielder. He’s had his moments, but the power never developed like scouts hoped and Gross never could figure out lefties. While stardom has alluded Gross, he’s been a fixture in the big leagues the past couple of seasons. He’s bounced around from Toronto to Milwaukee and then to Tampa Bay, who may or may not non-tender him this offseason. Gross is used mostly in a platoon to avoid southpaws (he had just 29 at bats against them this season) and as a bat off the bench.

Strengths: He’s a good athlete with solid skills across the board.

Final Analysis: Gross can probably carve himself up a nice little career as a platoon and/or bench player. He has actually been more successful than most of the first rounders in 2001, but his athleticism has never translated into the production expected of a big league regular. If he’s content with getting around 200-to-300 at bats per year, big league clubs will keep him around. He’s got a good attitude and is a positive influence around the clubhouse.

By Todd Habiger
Tags: MLB
This entry was posted on Friday, December 4th, 2009 at 9:55 am and is filed under BASEBALL, Draft report, Todd Habiger. You can follow any responses to this entry through the RSS 2.0 feed. Both comments and pings are currently closed.