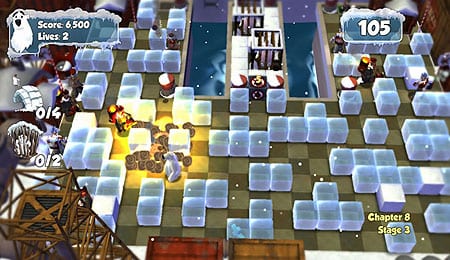 Ever notice how you come across a bear once in a while you shouldn’t have messed with?

One of my earliest video game memories as a child is of my father playing a standup arcade game called Pengo, wherein a little penguin pushed blocks of ice to destroy its nemeses, the Sno-Bees. By the time I reached gaming age, Pengo was nowhere to be seen, but I was still intrigued when I heard about Valcon Games’ Polar Panic, which was drawing comparisons to Pengo. Having played the game, I can say that while similarities exist, Polar Panic brings considerably more variety to the table.

The controls for Polar Panic couldn’t be easier as you simply use either the left stick or d-pad to guide your bear through the levels. Beyond that, only one button (X) is actually used during gameplay, which allows you to push blocks of ice or destroy snow. Even someone with zero gaming experience should grasp this game in a matter of minutes.

Unfortunately, maneuvering your bear around the mazes isn’t responsive enough. The game does not allow diagonal movement, instead limiting you to up/down and left/right which — combined with the slightly unrefined controls — leads to far too many instances of getting caught on a corner. Also adding to the frustration is that the trappers’ attacks never really seem to make contact and instead register as hits before reaching you, which reduces your ability to rely on reflexes for quick escapes.

Polar Panic features an artistic style that definitely looks geared towards a younger audience, and when I say younger I mean pre-teen. Your hero, Polar, is an unassuming looking bear with minimal personality. The game’s villain, Mr. Big, looks kind of like an evil version of the guy from the cover of Monopoly, unfortunately sans monocle. There’s a decent assortment of trappers, and while none of them really stand out, you shouldn’t have trouble differentiating the ones that carry clubs from the ones walking around with flamethrowers — a critical bit of info to have when devising your strategy.

The backgrounds can make things more difficult than they need to be at times, as I had some trouble identifying obstacles or switches that I needed to hit to advance. There isn’t a lot of variety from one stage to the next, either, which hurts given there are north of 100 levels.

A very pleasant score accompanies the action, and it serves as the game’s high point in terms of the audio/video presentation. Sound effects are fairly sparse with some occasional growls from Polar, laughter from the evil trappers and weapons firing.

While Polar Panic fails to impress in the more superficial areas, it thankfully saves its best effort for where it matters the most…gameplay. The game comes with three modes: story, puzzle and survival. The story mode tells a tale of an evil corporation that bear-naps Polar’s family, causing our heroic carnivore to strike out in an effort to save his relatives and get revenge in the process. It’s very basic and unfolds during some text screens between chapters.

It’s only real purpose is to propel Polar into the next set of obstacles for him to clear. You’ll battle through 10 chapters in all, each of which contains five levels. After every other level there is also a boss fight, making for a total of 55 levels. They start out easy, but the challenge gets amped up as you move along even on the easiest of the three difficulty settings. The further you progress, the larger the maps will get, and the more enemies will fill them. You’ll also see more and more powerful enemies, starting with basic trappers that can only use a melee attack with their club all the way on to hunters tossing dynamite at Polar. The game also introduces different types of blocks to mix things up a bit, though you’ll still be primarily pushing blocks of ice throughout.

You’ll need to defeat all the trappers to advance, and each level has a time limit. There are also bonus objectives, such as rescuing other polar bears or destroying snowmen. At the end of each level your score will be tallied based on time remaining, bonuses collected and multipliers (you earn extra points for crushing more than one enemy at a time) with your performance earning a letter grade. Once you’ve finished a chapter you can go back and replay individual levels to improve your score.

Puzzle mode removes the enemies and makes it all about your ability to guide Polar to the exit. In some ways this presents more of a challenge than the story mode because one wrong move can render a puzzle unsolvable and force you to restart. Many of the later puzzles take a keen eye and patience to complete, and once you do solve them you’re encouraged to try again to reduce the number of moves you made while improving on your time. Both items are scored individually with your overall performance being posted on an online leaderboard. It undeniably makes for the most cerebral challenge found in Polar Panic.

For those that prefer less thinking and more thumping, survival mode pits you (and up to three friends) against never ending waves of trappers. It’s fast paced and easily accessible to everyone, making it the most family-friendly mode. Between the three game types you should find enough replay value to invest a good number of hours attempting to top your previous bests.

Anyone glancing at the graphics and writing this off as a kid’s game is making a mistake, as Polar Panic actually ranks as a fairly challenging puzzler. The shortcomings in location variety and collision detection knock it down a peg, but there’s still significant value to be found for those that embrace the genre.

By Herija Green
This entry was posted on Tuesday, January 19th, 2010 at 8:34 am and is filed under Herija Green, Video Game Reviews. You can follow any responses to this entry through the RSS 2.0 feed. You can leave a response, or trackback from your own site.