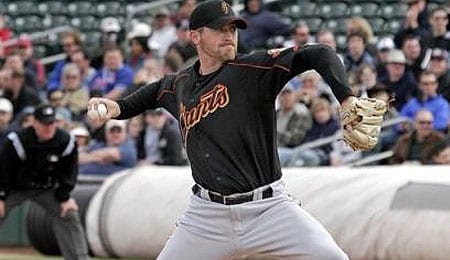 Brad Hennessey couldn’t stick as a starter, but was briefly a decent closer.

The Skinny: Taken out of Youngstown State University, Hennessey sported an killer slider that was his out pitch and a fastball that could reach the mid-90s (though he had to dial it down to the low-90s/high 80s to control it). His career almost never got on track as he missed 2002 and most of 2003 to have two benign tumors removed from his back. But through hard work Hennessey came back in late 2003 and made it to the Show in 2004. For three seasons, Hennessey bounced between Triple-A and the big club. After working mostly as a starter, he found big league success in the bullpen. Hennessey was an effect reliever in 2006 and in 2007, after Armando Benitez was traded, he inherited the closer job and converted 19-of-24 saves. Unfortunately, that was as good as it got for Hennessey. He was awful in 2008 and was allowed to leave as a free agent following the season. He signed with Baltimore in November 2008, but was released on June 11, 2009 without having thrown a pitch for the Os.

Strengths: Hennessey has a great slider and major league fastball; he’s a good athlete with a clean delivery.

Weaknesses: His stuff is flat much of the time, he struggles to throw the ball by hitters and never developed an effective third pitch.

Final Analysis: Hennessey’s coming back from cancer made for a great story, and while he had his moments in 2007, he rarely was a decent big league pitcher. Likely done as a big league pitcher, he wasn’t exactly what the Giants had hoped for when they drafted him. He hasn’t show anything since 2007, and arm problems this year may have done him in.

The Skinny: Bulger was an infielder at Divison II’s Valdosta State for most of his college career, but doubled as the team’s closer his senior year and immediately became a prospect with a fastball that could reach the mid-90s. Arizona made him a surprise first round pick and Bulger rewarded the D-Backs by looking like a complete bust ij his first pro season. In 2003, he had Tommy John surgery and when he returned in 2004 as a reliever, Bulger’s velocity had increased to the point that he was topping out at 98 mph. The following year, he made his big league debut for Arizona. In 2006, he was traded to the Los Angeles Angels and pitched mostly in the minors with an occasional taste of the Show. This past season, Bulger finally stuck with the Angels and pitched very effectively in middle relief, appearing in 64 games, finishing with an 3.56 ERA and even recording his first career save.

Strengths: A superb fastball with movement and a power curve.

Weaknesses: Had command problems early in his career and continues to struggle with his control.

Final Analysis: Bulger got a late start to his pitching career and that hurt his development. He was an effective part of the Angels bullpen last season and, with his stuff, he should continue to find regular big league work even if it’s not with the Angles (there was talk about removing him from the 40-man roster this winter, but so far that hasn’t come to pass). While he looked like a bust early in his career, Bulger may become one of the rare pitchers in this draft that actually makes it.

The Skinny: Griffin looked like a star in waiting coming out of Florida State. He topped .400 his three seasons there, including a whopping .450 mark his final season, prompting FSU coach Mike Martin to call him the best pure hitter in the history of the program. It was thought that Griffin would be a .300 hitter and 20-plus homer threat in the majors. His defense was pretty miserable, limiting him to left field or first base with DH realistically the best option. Griffin was also saddled with below average speed. Despite his hitting prowess in college and flashes he showed in the minors and majors, Griffin was never able to consistently duplicate that success as a professional, with a .265 career mark in nine minor league seasons. (He’s actually put up a sweet .304 career BA in his two major league cups of coffee.) By 2004, Griffin’s days as a legitimate prospect were done. His power developed (.454 career slugging in minors), but his lack of plate discipline and limited defense held him back from getting any shot at a regular big league gig. Griffin split last season between the Triple-A teams of the Dodgers and Cubs, playing in 120 games. He’s now a minor league free agent, and as a corner outfielder with power potential, he will likely be intriguing to some clubs.

Final Analysis: Griffin went from prospect to suspect pretty quickly. He never developed as a hitter despite his tremendous success at Florida State and quickly faded in to minor league oblivion. While some team may be intrigued by his pop, he’s probably nothing more than organizational depth at this point.

The Skinny: McBride earned his reputation as a high school flamethrower thanks to a fastball that worked in the mid- to high-90s with good movement. The Braves drafted him 21st overall, part of an organizational trend to draft local pitchers. They brought him along slowly, but he climbed his way through the organization deliberately. Besides his fastball, McBride sported a killer slider that some scouts compared to Steve Carlton’s. He also had a plus changeup and mixed all three pitches well. The Braves raved about the kid’s competitiveness and thought he would become a solid starter. However, there were signs of trouble. McBride’s fastball lost velocity, dropping into the low 90s. Then, in 2004, he lost all feel for his changeup and slider and was converted into a reliever. He made is big league debut in 2005 and turned into an effective member of the bullpen in 2006, appearing in 71 games and going 4-1 with a 3.65 ERA. The following year, In 2007 he struggled with his control and was optioned to Triple-A. McBride was recalled in May and then traded to the Detroit in June for Wil Ledezma. He was ineffective for the Tigers, so was optioned to Triple-A a couple months later. McBride only threw one inning in 2008 for Toledo before going on the disabled list with elbow woes. He has since had Tommy John surgery. With his elbow still sore as of Spring Training 2009, he was outrighted off the roster, and has not pitched since, leaving his career in doubt.

Strengths: McBride had an awesome fastball and slider to go with a plus change up. He had good command of all pitches and was highly competitive. McBride also is brilliant at keeping the ball in the park, having surrendered just 0.5 homers per 9 innings in his career.

Weaknesses: McBride has lost velocity in his fastball and control of his slider and change up and is now been dealing with serious elbow problems for a couple of years.

Final Analysis: Obviously, the Braves had hoped for more than 103 big league innings from their first round draft choice. McBride looked like he was going to climb steadily through the system and into the rotation, but 2004 proved to be the turning point and was probably the beginning of the end of his career. Yes, McBride enjoyed a fine 2006 campaign, but that was his only taste of big league success. There might be a place in some organization after McBride shows he is recovered from Tommy John surgery, so he may still become an effective reliever if he can get a hold of his control issues. But as of this writing, McBride seems to have a long road back to Fantasy relevance.

The Skinny: Crosby was a highly regarded prospect out of Long Beach State when the A’s drafted him. Not blessed with tremendous range or speed, Crosby impressed the A’s with his work ethic and baseball knowledge. He was nearly a .300 hitter in the minors, even though his strike zone judgment was suspect. In 2004, Crosby won the AL Rookie of the Year Award by blasting 22 home runs, scoring 70 runs and driving in another 64. He hasn’t reached double digits in home runs since. Other than during his rookie campaign, injuries cost Crosby large chunks of every season except for 2008. And given how badly he struggled in 2008, it looked like he had nothing left. Crosby’s strike zone mastery failed to improve, leaving him as a light-hitting shortstop with below average range. Last year, Crosby was relegated to a utility infield role, playing mostly first and third, but also appearing at second and short — he even made his first ever outfield appearance. During the Winter Meetings, the Pirates signed Crosby for $1 million which, tellingly, was Pittsburgh’s biggest splash during the meetings. He’ll try to unseat Ronny Cedeno as the team’s starting shortstop, but until his power re-emerges, he’ll most likely remain a utility infielder.

Weaknesses: Lack of plate discipline and injuries seemed to rob him of his power.

Final Analysis: Crosby has failed to build on his ROY campaign partly due to injuries, though health woes can’t completely account for his failure to improve. The A’s were obviously hoping for more from Crosby especially after his rookie year. It would be typical A’s luck if Crosby rebounds big time, but with him just about to turn 30, it’s more likely that he will have to eek out a living bouncing from club to club each year in a utility role. It’s doubtful anyone will give Crosby the chance to recapture his past glory.

By Todd Habiger
This entry was posted on Monday, January 4th, 2010 at 3:03 pm and is filed under BASEBALL, Draft report, Todd Habiger. You can follow any responses to this entry through the RSS 2.0 feed. You can skip to the end and leave a response. Pinging is currently not allowed.