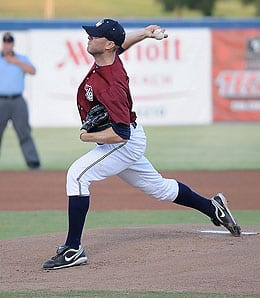 We continue our review of the 2001 MLB Draft today, with a look at picks 16 through 20 of the first round. You can find previous parts here: Part I, II and III.

The Skinny: The White Sox drafted Honel based on the fact that he threw a devastating knuckle-curve ball with great command and a fastball that hit the mid-90s. His stuff lead the Sox to believe that he was going to be a top of the rotation starter. Honel played the part well, moving steadily through the system until 2004 when injuries set in. Tendinitis limited him to four appearances in 2004 and when he came back in 2005, he wasn’t the same pitcher, as he compiled a 5.88 ERA in 93 innings. The following year was another lost season for Honel as he underwent Tommy John surgery. After surgery, Honel struggled to get his fastball back, pitching mostly in the high 80s range. After the 2007 season, Honel retired briefly, before signing with with the St. Louis Cardinals organization soon thereafter. Unfortunately, Honel had nothing left and he never made it through the season with the Cardinals Double-A club. After the Cardinals released him, Honel shifted to Independent Ball, joining the Edmonton Capitals of the Golden League. He had a fine year split between Edmonton and Long Beach, but struggled with massive control issues.

Strengths: Honel’s knuckle-curve is an out pitch that he can throw for strikes and he isn’t afraid to throw it anywhere in the count. He also possesses a 90 mph fastball and good command of his pitches.

Weaknesses: Injuries proved Honel’s undoing as tendinitis and Tommy John surgery were just too much to overcome, robbing him of his command and fastball.

Final Analysis: You can’t come down too hard on a guy or organization because of injuries. The White Sox have won a World Series and have been a competitive team since this draft, so this major slip obviously didn’t cripple the team. Honel looked like he was going to more than justify his high selection early on, but injuries destroyed his career. He turned 27 last month, but 76 walks in 86 innings in Indy ball doesn’t exactly scream ‘comeback candidate.’

The Skinny: When the Tribe drafted him, Denhan was a flamethrower out of Deer Vally High School in Antioch, Calif., with emphasis on “thrower.” While he could reach the mid-90s, Denham lacked control as well as secondary pitches. He struggled from the very outset of his pro career as he couldn’t find the plate and his mechanics were awful. The Tribe reworked Denham’s mechanics with mixed results – his control was better, but he got smacked around a lot. He progressed slowly through the Cleveland system, but never showed much potential along the way and never made the team’s 40-man roster, ultimately becoming a minor league free agent after the 2006 season. Since then he’s bounced around the Cincinnati, Oakland and Los Angeles Angels organizations, but has yet to appear in a big league game even though he’s pitched 42 games at the Triple-A level.

Strengths: Denham has an awesome fastball, helping him average over a strikeout per inning in his first professional season.

Weaknesses: Basically, everything else: he has bo command and never developed the secondary pitches needed to pitch in the majors.

Final Analysis: Denham is a complete bust so far. He only experienced success once in his professional career, in 2005 when he repeated Double-A. Beyond that, Denham’s career has been an exercise in frustration. Yes, he’s still just 26 (for another week), but if Denham didn’t get called up to the Halos this season when they dealt with so many injuries, it’s clear he’s never going to get his shot at the big time.

The Skinny: Taken out of Notre Dame, Heilman has a major league fastball that sits in the low to mid-90s, a plus slider and good splitter and changeup. He also has good command of all four pitches. Pitching with a natural three-quarters delivery gives Heilman a nice fluid motion. Working mostly as a starter, Heilman reached the majors in 2003 as a middle reliever. By 2005, he was one of the best set-up men in the business, though he still longed to be a starter. However, it wasn’t going to happen as the Mets needed him in the set up role and he excelled in it until 2008 when the wheels came off and he suddenly couldn’t get anybody out. Following his disastrous 2008 season, Heilman was shipped to the Seattle Mariners who quickly flipped him to the Chicago Cubs. His 2009 season was workman like with a 4-4 record and a 4.11 ERA and then Cubs traded him to Arizona this offseason.

Strengths: Heilman has four pitches that he can throw with command. A changeup that was simply average when he was drafted has turned into one of his better pitches. He has a nice, fluid delivery.

Weaknesses: Mentally, Heilman always held hope that he would again be a starter. But early success as a middle man made him so valuable in the role that the Mets had no choice but to keep him there. It’s possible his desire to start hurt his career as he never truly embraced his role.

Final Analysis: Certainly compared to other hurlers from his draft class, Heilman has enjoyed a successful career as he’s been on a big league roster since 2003. It’s not packed with All-Star recognition or rings, but for a three-year stretch he was one of the best set-up men in the game. Heilman will probably bounce around the league for most of the coming decade, filling teams need for bullpen depth. For his sake, let’s hope his defining moment isn’t serving up the series-clinching home run in the 2006 NLCS.

The Skinny: Fontenot was drafted after a stellar career at LSU where he was named Freshman All-American his first year and All-SEC his sophomore year. His solid hitting skills made him look like a future 15-homer, 20-steal type of player. Fontenot’s defense lagged behind his offense as he didn’t have great instincts and he didn’t cover as much ground as his speed would indicate. In 2005, Fontenot was shipped to the Chicago Cubs as part a a package that netted the Orioles Sammy Sosa. He made his major league debut in 2005 and stuck with the big league club the following year. Since then, Fontenot has had his moments and always seems to be lurking near the starting 2B gig for the Cubs, but has never grasped the job for good. He has been a valuable player as both a starter and bench player, seeing his at bats increase every year since his debut.

Strengths: Fontenot is a good offensive player who works counts and does what he can to get on base. He offers a little pop with plus speed.

Weaknesses: He’s not a great defender despite working hard on that aspect of his game. Fontenot hasn’t used his speed to generate steals with just 11 total steals in four big league seasons after swiping 43 in his first three seasons in the minors.

Final Analysis: Fontenot has made himself into a solid big league player. Far from a star, he’s still a valuable asset to his team. He’s limited against lefties, but knows his role and works hard. Fontenot would never have beaten out Brian Roberts in Baltimore, so the Sosa trade — while a disaster for the Os — turned out to be a good deal for Fontenot’s career. He’ll reprise his bench role for the Cubs in 2010.

The Skinny: Sowers never signed with the Reds, opting to attend Vanderbilt instead, so his report will have to wait until we get to the 2004 draft when the Cleveland Indians took him with the sixth pick. I will say, however, that the pitching poor Reds probably could have used Sowers. While he hasn’t panned out in Cleveland, the Reds have run through so many terrible pitchers over the years that Sowers surely would have been an improvement.

By Todd Habiger
Tags: MLB
This entry was posted on Friday, December 18th, 2009 at 4:36 pm and is filed under BASEBALL, Draft report, Todd Habiger. You can follow any responses to this entry through the RSS 2.0 feed. Both comments and pings are currently closed.