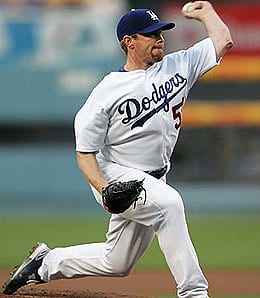 Randy Wolf gave the Dodgers just what they needed on Friday night.

Randy Wolf was absolutely filthy Friday night, combining with two relievers to one-hit the Cubs and lead the Dodgers to much-needed consecutive wins for the first time since August 10-11.

Having worked at least seven innings in each of his last four starts, Wolf has been a major bonus for a Dodger bullpen that’s had to work very hard this season. And his brilliant effort Friday helped continue the Cubs’ misery against the Dodgers. LA’s 2-1 win marked its 13th victory in the past 17 games over Chicago.

With Colorado having recently pulled within 4.5 games and the Giants inching closer too, the Dodgers really needed the kind of effort that Wolf provided Friday. Saturday, LA will look to earn its first three-game winning streak in over four weeks – not exactly the kind of run a division leader with designs on staying in front needs to be on.

Wolf has shaved almost a full run from his 2008 ERA, and one of the major reasons why is his massively improved control. The fact that he’s holding the opposition to a .230 BAA (his best since 2002) sure helps, too.

In our most recent starting pitcher rankings, we pegged Wolf at No. 45, but of course that list was compiled during his off month. Considering the roll he’s been on since, Wolf is now a top 25 pitcher. So why is he still available? If you need pitching help, he could be your answer.

Let’s talk about the Dodger bullpen for a moment. As I mentioned above, this unit has been put through the paces – only the Padres have used their pen more – but LA’s bullpen has held the fort, and is currently the second-best in the NL. But despite this significant workload, the Dodger bullpen is showing no signs of faltering. In fact, over the past six games, Dodger relievers have worked a combined 17.1 IP and surrendered just a single earned run.

One of the unsung heroes of this pen that intrigues me is sophomore Ramon Troncoso. Since the acquisition of George Sherrill, he’s been pushed a little further down the depth chart, but Troncoso still strikes me as a dark horse worth watching – especially since closer Jonathan Broxton’s toe woes are expected to continue all season long.

Troncoso had been exceptional all season until running into some troubles this month. However, on Thursday he tossed a third scoreless outing in his past four games, so he seems to be righting the ship. Perhaps we should have predicted a rough month for the 26-year-old righty, as despite a 2.19 July, he was battered around to the tune of a .340 BAA – a definite red flag.

As mentioned, Troncoso appears to be working through this difficult phase, and given that he’s already amassed five saves and 10 holds this year – he took over when Broxton missed some time last month — I definitely think he’s worth tracking in deeper NL-only leagues.

By RotoRob
This entry was posted on Saturday, August 22nd, 2009 at 1:39 pm and is filed under BASEBALL, Fantasy Notes, RotoRob. You can follow any responses to this entry through the RSS 2.0 feed. You can leave a response, or trackback from your own site.