The Wire Troll: Marmol-ade in the Bullpen 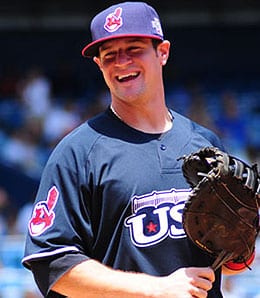 We expect Matt LaPorta’s run in Cleveland to be far more fruitful this time around.

Matt LaPorta, OF, Cleveland Indians: Eric Wedge has indicated that LaPorta will receive regular playing time over the balance of the season at both first base and in the outfield in this, his second go-round with the Indians in 2009. It is impossible to ignore those stellar numbers that the 24-year-old produced this year at Triple-A Columbus — 17 homers, 60 RBI and a great .299 BA. LaPorta could potentially be a strong asset down the stretch for both the Indians and your Fantasy squad. Go get him, and quick.

Carlos Marmol, RP, Chicago Cubs: The Cubbies finally said enough is enough and anointed Marmol as their new closer this past week. When he gets the ball over the plate, he’s been unhittable, but with 52 walks in 57 1/3 IP this season he simply hasn’t been finding the plate nearly enough. At this stage in the Fantasy season, his ugly WHIP resulting from too many walks has a very small impact on the overall numbers with most Fantasy teams having so many innings under their belt, so don’t let the high walks scare you off. Just hope that it doesn’t scare Lou Piniella into installing Angel Guzman as his closer, or even — gasp — giving Kevin Gregg another chance.

Travis Snider, OF, Toronto Blue Jays: The future for the Jay outfield has returned for Round Two in the 2009 season and he’s arrived just in time to possibly bring some life to a team currently devoid of it. Cito Gaston has indicated that the 21-year-old Snider will be getting regular playing time down the stretch, as he should. Snider is coming off a great run at Triple-A Las Vegas where in his last 10 games before getting recalled he was tearing the cover off the ball to the tune of a .439 BA, with four homers and seven RBI in 41 at bats. How can you not roster this guy in all formats for the September run?

Garrett Mock, SP, Washington Nationals: The Nats have been playing very well as of late and Mock has been a solid contributor. He now has wins in two of his past three starts and on Thursday against the Rockies, he managed a season-high eight strikeouts. Mock still walks way too many, but with those solid strikeout rates he has recently demonstrated, he makes for a solid option in NL-only and H2H leagues.

Drew Stubbs, OF, Cincinnati Reds: The 24-year-old hit a walk off homer in his second game for the Reds, but don’t expect much more in the power department as he only managed three long balls in 411 at bats at Triple-A Louisville this season. What Stubbs does bring to the table is speed, with 46 thefts. He also brings an incredibly high strikeout rate with 104 this season. If speed is your need, Stubbs makes for a decent gamble, but temper your expectations somewhat as he still has to prove he can find a way to get on base.

Carlos Gonzalez, OF, Colorado Rockies: Over his past 10 games, 23-year-old Gonzalez is demonstrating the skills that made him the key for the Rockies in the deal that sent Matt Holliday to Oakland. Gonzalez has managed six long balls, 11 RBI, 10 runs scored and a great .300 BA. Producing at that level has to garner attention and as long as he continues to swing a hot stick, the opportunities will be there for him at the top of the order for the Rockies. Get Gonzalez rostered in all formats and enjoy the current hot streak.

Anibal Sanchez, SP, Florida Marlins: Is he finally healthy? If so, he will be a huge asset for the Fish as they fight for a Wild Card spot.

Charlie Haeger, SP, Dodgers: What’s this? Another knuckler named Charlie who pitches for the Dodgers (for those of you old enough to remember that Charlie Hough spent the first decade of his 25-year career with LA)? Anyways, when a knuckler is knuckling, it’s unhittable…when it’s not it’s a 70 mph fastball, that is. Ride Haeger while he’s hot, but always remember the hot can turn cold very abruptly.

George Sherrill, RP, Los Angeles Dodgers: Saturday, he picked up his first save since the trade from the Orioles. He offers a nice little insurance package for a playoff-bound Dodger team that’s closer is dealing with toe problems.

Fernando Tatis, 3B, New York Mets: The Mets still have to field a team, as difficult as it may be on most days, and until David Wright returns from the DL, Tatis is the man at third base.

Kevin Correia, SP, San Diego Padres: Correia has eight wins for the Padres and has been fairly consistent over the past month, making him a solid option for those playing in deeper leagues.

Ivan Rodriguez, C, Texas Rangers: I-Rod has returned home to the scene of his greatest glories, providing a nice little bonus for those playing in two-catcher AL-only leagues.

Franklin Morales, SP/RP, Colorado Rockies: Somebody has to step up and replace the injured Aaron Cook in the Colorado rotation. Might we see a repeat of Morales’ great season ending run from 2007?

By Tim McLeod
This entry was posted on Sunday, August 23rd, 2009 at 10:17 am and is filed under BASEBALL, The Wire Troll, Tim McLeod. You can follow any responses to this entry through the RSS 2.0 feed. You can skip to the end and leave a response. Pinging is currently not allowed.