Kemp Helps Dodgers get Back on Track 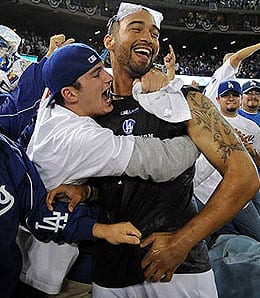 Matt Kemp played the hero again for the Dodgers Sunday, as he has so many times this season.

Mired in a skid that had seen them lose two of three to Florida before getting swept in St. Louis, the Dodgers earned a much needed series win by thrashing the Braves 9-1, a victory spurred by Kemp’s tie-breaking three-run dinger in the fifth. With both the Giants and Colorado playing well lately, LA’s lead in the NL West had slipped to seven games.

For the Dodgers’ leading hitter, the homer was the key blast in a 3-for-5 game that featured a career-high tying five RBI.

Heading into 2009, we ranked Kemp as the 10th-best Fantasy outfielder, a status which he has actually surpassed. In fact, there may be only two NL outfielders who have been more valuable so far this season.

Kemp’s consistency this season has really been his calling card – he has not hit lower than .292 in any one month. His walk rate is way up, as he’s already closing in on a career high in that department.

Clearly, Kemp has bounced back nicely from a somewhat disappointing 2008, his first season as a full-time player. And considering he won’t be 25 until next month, there’s still plenty of upside here that his keeper league owners will enjoy in the coming seasons.

Generally, Kemp’s second-half numbers tend to be slightly better so far in his career, so I don’t expect a letdown over the final couple of months.

Our advice: Enjoy the ride.

By RotoRob
This entry was posted on Monday, August 3rd, 2009 at 12:51 am and is filed under BASEBALL, Player profile, RotoRob. You can follow any responses to this entry through the RSS 2.0 feed. You can skip to the end and leave a response. Pinging is currently not allowed.