The Wire Troll: Masterson of his Domain 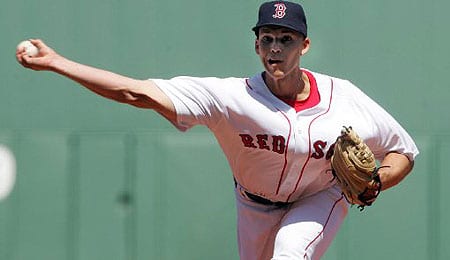 Justin Masterson could be the big winner of the V-Mart trade.

In what has been a very active trading week, let’s get straight to it and review some of the waiver wire options heading into the dog days of summer.

Justin Masterson, SP/RP, Cleveland Indians: The 24-year-old Masterson, the prize catch in the Victor Martinez deadline deal, is looking at a future in the Indian rotation. They will probably stretch him out over the next couple of weeks as he has been pitching out of the bullpen recently in Boston. Masterson’s year-to-date numbers have not been outstanding, but four terrible outings have been responsible for 22 of the 36 earned runs he has surrendered. Even with that quartet of poor performances, he is still sporting a 4.50 ERA in 72 IP with 67 strikeouts. Masterson is young and does have considerable upside so is worthy of a wire addition in AL-only and keeper formats.

Rajai Davis, OF, Oakland Athletics: The playing time opportunities should abound if Davis can carry forward his outstanding July (.405 BA) into August. Over the past two and a half seasons, in 546 at bats he has managed a stolen base every 8.3 at bats. In his past four games, he has managed 10 RBI — yes, 10 — a very nice bonus for those Fantasy owners that had already invested in his speed potential. Hitting in the two-hole for the Athletics will provide plenty of opportunities for him to help you in both stolen bases and runs scored down the stretch.

Kyle Blanks, OF, San Diego Padres: We took the opportunity to review the 22-year-old Blanks in the June 21 edition of The Wire Troll and the slugging outfielder has recently stepped it up and is worthy of further mention. The “future” appears to be right now: in the past 10 games, Blanks is hitting .355 with four homers, eight RBI and eight runs scored. It is now time to start looking at this kid in 12-team mixed leagues.

Rick VandenHurk, SP, Florida Marlins: VandenHurk is coming off a solid outing Thursday against the Braves, allowing only two earned runs in six innings in a no-decision. What should catch your attention is the nine strikeouts he chalked up. Since his most recent promotion on July 20, the 24-year-old righty is three-for-three in the quality starts department. It’s time to get him rostered in NL-only and H2H formats and he should be on the radar in mixed formats.

Tommy Hunter, SP, Texas Rangers: In his past four starts, Hunter has allowed a scant three earned runs in amassing three wins. The 23-year-old is currently sporting a 2.00 ERA and 1.17 WHIP on the season. He has been a very hot commodity as of late with his ownership in leagues playing at CBS skyrocketing from six to 43 per cent over the past three weeks. The fact that Hunter is posting far better numbers since his promotion than earlier in the year at Triple-A Oklahoma City does have me concerned. Proceed with caution as some regression can be expected, but for now he is a fine option in AL-only and keeper formats.

Brian Matusz, SP, Baltimore Orioles: News flash! Right on the heels of the Chris Tillman promotion, the Orioles are looking to show off the vaunted skills of Matusz, another one of their other young stud pitchers. The 22-year-old phenom was pulled early from his Saturday start at Double-A Bowie after just one inning, so it looks like he makes his much anticipated debut Tuesday against the Tigers. He managed a perfect 7-0 record in eight starts down on the farm and was totally dominant. In 46 1/3 IP, he allowed only 31 hits, with 11 free passes. Toss in 46 strikeouts and the fact that he held the opposition to a meagre .189 BA and it’s no wonder that Fantasy players with the Number One waiver priority are smiling this week. Matusz has the potential to be an impact pitcher right from the get-go so grab him quick before he’s long gone.

Cliff Pennington, SS, Oakland Athletics: The trade of Orlando Cabrera to the Twins has opened up an opportunity for the 25-year-old Pennington, a 2005 first-round selection who managed 27 thefts in 31 attempts at Triple-A Sacramento. He will get the majority of the playing time opportunities down the stretch, so if your Fantasy squad is in need of a middle-infielder with great speed, an acquisition is in order.

Bud Norris, SP, Houston Astros: With 112 strikeouts in 120 IP at Triple-A Round Rock, is this Bud for you?

Aaron Poreda, SP, San Diego Padres: Keeper league material acquired from the White Sox. The opportunities will be there sooner rather than later in San Diego.

Yusmeiro Petit, SP/RP, Arizona Diamondbacks: One in a row is a streak isn’t it?

Joe Beimel, RP, Colorado Rockies: Escapes the Gnathouse and “holds” down the fort for the Rockies down the stretch.

Derek Holland, SP, Texas Rangers: Thursday against the Mariners we caught an early preview of 2010. Yes, the kid is that good.

Michael Saunders, OF, Seattle Mariners: The 22-year-old with five-tool potential was not called up to sit, and being blocked by only Ryan Langerhans should make playing time opportunities a rather safe bet.

The Orioles Bullpen: Jimmy Johnson is first in line for the duration of 2009 with Chris Ray a good bet to be back closing in 2010.

By Tim McLeod
This entry was posted on Sunday, August 2nd, 2009 at 8:58 am and is filed under BASEBALL, The Wire Troll, Tim McLeod. You can follow any responses to this entry through the RSS 2.0 feed. You can leave a response, or trackback from your own site.