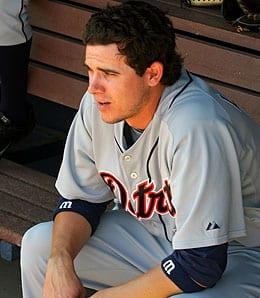 Jeff Larish has gone from sitting on the Tiger bench to raking at Triple-A.

The Tigers are starting to play better, downing the Pirates Friday 3-1 for their sixth win in eight games. The AL Central leaders are now 6.5 games ahead of the third-place ChiSox. Detroit’s success has been predicated by its pitching staff, which has been harder to hit than any staff in the AL. Team speed continues to be a weakness, but the team is actually doing much better in that department than they did last season. What’s up with the offense in general? On Friday, for the first time in 13 games, the Tigers amassed over 10 hits in a game. Their collective BA in June before Friday? Try .217.

It looks like Brandon Inge is turning it on again after a very sluggish May. He snapped a two-game hitless drought Friday by turning around the first pitch Pirate reliever John Grabow tossed and smacking it over the left-field wall for his 14th jack of the season. The dinger helped Detroit salvage some pride over Pittsburgh with a 3-1 win on a night when the city’s hockey club was improbably losing its fourth game in five tries to the Penguins to be denied back-to-back Stanley Cups. As we discussed a few weeks ago, Inge jumped out to an absolutely sick start in April, and while he mashed another five dingers in May, he hit just .235 with a 709 OPS. In June, however, he’s been raking again. Inge has been healthy this season, and is enjoying a tremendously productive year. Believe it or not, in extremely shallow league, he may still be available on the wire, but with him heating up again, that won’t be the case for long. While Inge hasn’t been as sharp at the hot corner this season, there’s no complaint with his work at the plate as he heads towards a career year.

Jeff Larish, optioned back to Triple-A last week when Marcus Thames came off the DL, was fairly impressive in his most recent stint with the Tigers, showing more patience, improving his strikeout rate and hitting with more pop. Heading from the first-place Tigers to the last-place Mud Hens hasn’t seemed to derail Larish, who’s been extremely productive since his demotion. At the age of 26, I’d like to see him get a more extended look in Motown, but the way he’s raking, it’s just a matter of time.

Josh Anderson’s season has gone steadily downhill after a huge April, and even when it looked like he’d have some value when Thames went down, he continued to struggle. Well, Thames is back now, and Anderson also failed in his chance to take over the lead-off job from Curtis Granderson, as the Tigers search for ways to ignite their middling offense. Now, Anderson is starting to lose PT to Don Kelly and Ryan Raburn, and the fact that he wasn’t starting Friday night against the Pirates – a team he’s hit .600 against in his career – is very telling indeed. With Detroit facing plenty of lefties lately, Anderson hasn’t been playing much, and he hasn’t had a hit since last Saturday. He’s been getting his chances this year, and you need to pay some attention in AL-only leagues because of his stolen base potential, but the fact is that Anderson has not been able to develop on his promise of yet, and while it’s still early, he’s beginning to look like a potential bust.

Another Tiger starter who got off to a nice start, but has been sinking badly since is Gerald Laird. He hit .286 with a 780 OPS in April, but he slumped badly in May and hasn’t exactly turned it around much so far in June (.200 BA, 635 OPS). However, on Friday, Laird snapped a three-game hitless streak, getting a double and a run (but he whiffed twice). That’s his first extra-base hit in a week, and it’s the first time he’s tasted the sweet nectar of home plate in over a week. Sure, he does the little things well, like laying down the sac bunt, and he’s an excellent defensive catcher, but why do Fantasy owners care? This is a catcher we ranked 21st heading into the season, and while he hasn’t been that far off our ranking, he’s not really worth owning at this point unless you’re in a darn deep AL-only league. Laird has actually been drawing walks at a significantly higher rate than ever before, but his BA has not matched this improvement. So while the OBP is decent, his power has been awful, with a paltry 10 extra-base hits so far. Remind me again why the Tigers are having issues offensively?

By RotoRob
This entry was posted on Saturday, June 13th, 2009 at 10:06 am and is filed under BASEBALL, Fantasy Notes, RotoRob. You can follow any responses to this entry through the RSS 2.0 feed. You can leave a response, or trackback from your own site.