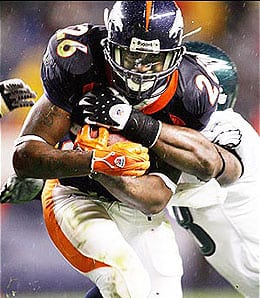 Injuries to Denver’s backfield were so extensive last year, Tatum Bell had to be summoned back to the NFL.

And the 2009 RotoRob NFL Draft Kit rages on, withe Herija checking in with his first team preview. Once we wrap up these team previews (this is the fifth already), we’re going to start releasing the kit’s other goodies (cheat sheets, sleepers/busts lists, etc.). Are you ready for some football?

Following a Week 14 win over the Chiefs, the Broncos stood at 8-5, held a three-game lead in the AFC West and were poised to end their modest two-year absence from the playoffs. Led by emerging Pro Bowl QB Jay Cutler, Denver’s once run-heavy offense had been replaced by a dynamic passing attack that would finish third (279.4 yards per game) in 2008. Cutler threw for a franchise-record 4,526 yards and 25 touchdowns, while Brandon Marshall (104 receptions, 1,265 yards, six TDs) and rookie Eddie Royal (91 receptions, 980 yards, five TDs) emerged as one of the NFL’s most potent 1-2 combinations.

Denver’s running game was a mess last year, much of which can be chalked up to a nearly incomprehensible string of injuries that eventually led to the Broncos summoning Tatum Bell from his job as a cell phone salesman to be their starter. The Broncos were flat-out awful defensively, ranking 30th in the NFL by yielding 28 points per game. They also dropped their final three contests to finish 8-8 and miss the postseason for a third straight season, including an embarrassing 52-21 loss to the Chargers in Week 17 in a game to determine the AFC West champion.

To refer to the Broncos’ offseason as tumultuous would be an understatement. The removal of Mike Shanahan after 14 seasons paved the way for 33-year-old Josh McDaniels to take over, and the former Pats’ offensive coordinator is already under fire after butchering his relationship with franchise QB (and all-around pink taco) Cutler to the point that Denver dealt the sensitive signal caller to Chi-Town. The team also made a lot of peripheral moves to upgrade its backfield and secondary, though it’s hard to consider the Broncos to be in anything but a transitional period in 2009.

There’s only one name to know for Fantasy owners coming out of Denver’s 2009 haul, and that’s former Georgia RB Knowshon Moreno. The first running back selected (12th overall), Moreno should immediately step in as the Broncos’ primary back, and with the downgrade under centre it wouldn’t be surprising to see Denver go back to relying heavily on its ground game this year.

What was arguably Denver’s biggest strength last year is suddenly a question mark. There are certainly worse quarterbacks out there than Kyle Orton, but he’s still a significant downgrade from Cutler. Orton is more of a game manager, a quarterback that makes the safe play and limits his mistakes. In 15 starts last year, Orton passed for over 300 yards just once and finished below 200 nine times. He’ll have better weapons in the passing game in Denver, but he’s no better than a mediocre No. 2 Fantasy quarterback.

The selection of Moreno means he should be the top option, but the Broncos imported some veteran talent to ease the load, adding Correll Buckhalter (76 carries, 369 yards, two TDs with Philadelphia in ’08) and LaMont Jordan (80 carries, 363 yards, four TDs with New England) to the mix. Jordan’s familiarity with McDaniels from last season could give him a leg up and makes him the most interesting of the backups in Denver, possibly giving him value as a fifth back. As for Moreno, draft him as a midrange No. 3 back with upside, but don’t reach for him over more established talent — you can’t assume McDaniels will have the success of Shanahan when it comes to running the ball.

Denver has a strong group of receivers, though it’ll be interesting to see how they do with Orton at the helm instead of Cutler. The good news on that front is that both Marshall and Royal are willing to go over the middle and catch short routes, which plays to Orton’s strength. Brandon Stokley gives them another capable target, though not a Fantasy-relevant one. Marshall remains a borderline No. 1 option, while Royal is a quality third Fantasy receiver. Add a little value to both in point-per-reception formats.

Tony Scheffler is a big-play tight end (16.1 yards per catch last year), and while he and Orton may not enjoy the same relationship that he and Cutler did, there’s no question Orton is comfortable looking for the tight end after throwing to the likes of Greg Olsen and Desmond Clark in Chicago. Scheffler is a strong No. 2 tight end with starter upside. Rookie Richard Quinn is someone worth watching in deep keeper leagues.

The Broncos invested three of their first four picks (all in the first 48 selections of the draft) on defense, and the signing of Brian Dawkins should help. However, this was one of the worst defenses in football last year, and they shouldn’t even be considered for a roster spot until they show marked improvement on Sundays.

By Herija Green
Tags: NFL, NFL Draft Kit
This entry was posted on Friday, June 12th, 2009 at 5:44 pm and is filed under 2009 RotoRob NFL Draft Kit, FOOTBALL, Herija Green, Team report. You can follow any responses to this entry through the RSS 2.0 feed. Both comments and pings are currently closed.