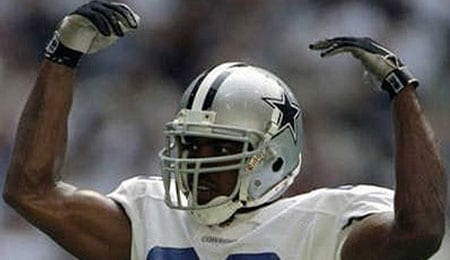 Felix Jones proved he’s capable of big plays, but is there enough work for him to be a Fantasy asset?

We’re back with more of the 2009 RotoRob NFL Draft Kit today, as Andy graces us with his first team preview. Once we wrap up these team previews (this is the fifth already), we’re going to start releasing the kit’s other goodies (cheat sheets, sleepers/busts lists, etc.). Stick around, folks. The party’s just getting started.

Through all the tumult and acrimony in the Big D, Tony Romo has established himself as one of the top quarterbacks in the whole league. While his completion percentage did drop a little last year, his interception percentage did as well. That shows a maturing quarterback who is more willing to throw the ball away than force one into a tough situation. Meanwhile, his yardage per game rose as he ranked fifth in the league last year.

The running game, despite injuries, proved that Dallas can go three deep with ball carriers. Marion Barber, Felix Jones, and Tashard Choice all contributed to the Cowboys’ 4.3 yard per carry average, good enough for 12th in the league. Now if they could just all get 20 carries a game.

The other bright spots were the bottom three Fantasy positions. Jason Witten, Nick Folk, and the defense all played as top 10 Fantasy producers. Witten, in particular, was a beast, hauling in nearly 1,000 receiving yards while fighting nagging injuries.

With Terrell Owens now out of town, it would have been nice to see any second wide out step up. The Cowboys got 10 games from Roy Williams, but the only sign of that is the “Games Played” column, because he hardly made a statistical impact. We don’t have any idea what Williams will do next season. And anyone that claims they do is flat out wrong. He has the talent, but he didn’t look like an NFL receiver.

Injuries. Injuries. Injuries. Romo, Barber, Jones, and Witten (even though he played a full 16 games) all battled injuries last year. It seems like a recurring theme with this group, but if they could stay healthy, who knows what they’d be able to do.

Jerry Jones and the Cowboys did a little purging, hoping to drop some of the “dead weight” they had accumulated over the years. This started with Owens and ended with Adam Jones. The working theory is that Romo will be able to play his game without worrying about forcing Owens the football. Of course, there is precedence for that. Back in 2006, when Donovan McNabb played his first full season without Owens, he improved his yards per game (compared to his last full season with Owens). He also led the league in touchdown percentage, adjusted yards per attempt, and yards per completion. If Williams does revert to his old playing level, Romo may not fall in value at all.

What draft? Oh, yeah. The Cowboys chose not to participate in this one, for all intents and purposes. They didn’t draft on the first day and that made everyone at ESPN really sad. Dem’s da breaks.

While Romo is a given as a top 10 Fantasy pick, the Cowboys did quietly upgrade their back-up quarterback situation. Last year, they went with a geriatric Brad Johnson. That didn’t work out so well, so they brought in Jon Kitna this season. It’s nothing special, but if you own Witten or Williams, that’s good news all the same.

Again, not much change with this group. It just comes down to how the carries are distributed. Barber is the “starter,” but Jones proved himself as a consistent home run threat. And Choice came in and did a little of everything. Obviously, this hurts the value of all three, but under the right conditions, any could be Fantasy starters.

Yech. Okay, Williams can’t be that bad. Maybe he just needed some extra practice time or something. Really, everything comes down to him this year. If he can regain his Detroit form, this group can still be successful. Patrick Crayton has shown glimpses of competence and Miles Austin will continue to chip in as a third guy. But if Williams still struggles and Crayton is alone out there, things could get pretty messy.

Witten and Martellus Bennett actually make up one of the best tight end duos in the league. The Cowboys haven’t been too keen on using two-tight end sets as of yet, but if the wideouts struggle, it might make more sense this year.

DeMarcus Ware is set up for an even better year than last season. With the other Roy Williams gone, Jones gone, and Wade Phillips totally at the helm, expect the Cowboys to get pressure on opposing quarterbacks with ease. The pass defense still won’t be anything great, but without the liabilities they’ve had in the past, it can’t help but to improve. The big question is whether the defensive line and linebackers will be able to contain opposing running games. Whatever Williams took away from pass defense, he added with run defense, and it was clear later in the year the Cowboys did indeed need that. So maybe Jay Ratliff and Keith Brooking can contain that up the middle, but if not, it could be a long season in Dallas.

By Andy Goldstein
Tags: 2009 NFL Draft Kit
This entry was posted on Saturday, June 13th, 2009 at 3:00 pm and is filed under 2009 RotoRob NFL Draft Kit, Andy Goldstein, FOOTBALL, Team report. You can follow any responses to this entry through the RSS 2.0 feed. Both comments and pings are currently closed.