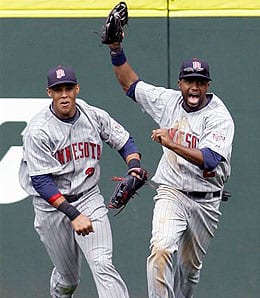 Denard Span, right, has been defensively superb this season, but his bat has cooled recently.

Denard Span enjoyed a huge game against the BoSox last week, but he’s gone into the tank since, sputtering into a 2-for-17 run – a slump that’s dropped his BA 17 points and under the .300 mark. He gained good traction on the waiver wire recently, and a big start certainly helped, but Span has cooled off in May. However, he’s scoring plenty of runs at the top of the Twins’ order, and while he’s not showing the same level of power he did as a rook and his walk rate has slipped, Span has also cut his strikeout rate. We projected him to be a top 50 outfielder, but he’s been much more valuable than that as he’s playing full time, something we didn’t expect. However, Span’s all-around play has dictated that he’s in the lineup everyday, and his defense in particular has been stellar. If you need outfield help, there’s a good chance Span is available on your wire.

We all knew Joe Mauer would be great, but the general perception was that his power would be limited. Uh, yeah. About that…the dude comes off the DL on May 2 and in just 99 at bats he cranks 11 home runs (just two shy of his career mark for an entire season), draws 19 walks and hits a ridiculous .414. And no, he’s not slowing down, going 4-for-8 in the past two games with a run, two doubles, a triple and a walk. Okay, so Mauer no longer steals bases, but the dude is an on-base machine and no one can get a pitch past him this season. And just think — he still hasn’t hit his power prime.

Justin Morneau continues to scorch, delivering timely hit after timely hit as he’s now hit safely in 10 straight games, driving in runs in the past three games. He enjoyed an excellent April with five homers and a 922 OPS and was even hotter in May with nine dingers and an OPS of 1172. Morneau is on track to crack 100 runs for the first time in his career and will match his career high in doubles at his current pace. Sure, he’s striking out more often, but who cares? We ranked him as the sixth best first baseman heading into the season, but besides Albert Pujols, who has been better?

Jason Kubel was back in the lineup Sunday after sitting the game before with a sore knee, however, his mini slump continued as he’s now 0-for-11 with six strikeouts in the past three games. Kubel is enjoying a solid all-around season, but is not hitting with the same kind of power he showed at the start of the season. In April, he looked headed to smash the career-best 20 long balls he stroked last season, but after managing just one dinger in May, that’s no longer the case. Kubel is enjoying a productive season, but the lack of homers has him winding back up on the waiver wires after being such a hot pickup in April.

With Nick Punto hitting the DL, it might be time to take another look at Brendan Harris in AL-only leagues. He got off to a great start, batting .350 in a part-time role in April, but he struggled most of May. However, Harris has shown signs of life lately, homering Sunday to run his hit streak to six games. I’d like to see more patience from Harris, but he’s enjoying a decent season and should be somewhat of an asset as long as Punto is sidelined.

Mike Redmond has been one of the better hitting back-up catchers in baseball for many years, but his regression in recent seasons seemed to accelerate this season when he got off to a super-sluggish start. However, a 2-for-4 performance Sunday capped a .310 month of May for Redmond. Obviously, given that he plays behind Mauer, Redmond only has value in extremely deep AL-only leagues, but it’s nice to see that the vet still has something left in the tank.

We were happy to see that Sean Henn got called up by the Twins a couple of weeks ago, something we felt he deserved. He got hit hard in his first appearance, but has tossed five straight scoreless outings since, including Sunday when he recorded his first hold. Henn’s got a long way to go before working his way onto the Fantasy radar, but he’s pitching better than he ever has in his four previous major league seasons, and that’s worth a tip of the hat if nothing else.

In addition to Punto and Joe Crede (knee), the Twins may be missing Michael Cuddyer for a few days thanks to a sprained finger. He got off to an awful start, but really tore it up in May (1046 OPS), leading to a recent recommendation from us. However, Cuddyer has slumped since then, and now he’s day-to-day with this injury. He had been healthy so far this season after missing most of last year, so let’s hope this current woe doesn’t derail what was shaping up as a career season for Cuddyer.

Luis Ayala had an awful April, but was much more effective in May, capping the month with three straight scoreless outings (5 1/3 IP, 3 H, 1 BB, 1 K) as he looks to rebound after enduring the worst season of his career in 2008. It’ll take some time before Ayala works his way into Fantasy relevance, but at least it looks like he’s headed in the right direction for now.

Brian Buscher actually was given a chance to win some serious PT this spring, but he’s been awful. He was 1-for-4 with the game-winning run Sunday, but that was his first hit in 11 days. I’d say he’s much closer to a trip to the minors than any real value in an AL-only league at this particular juncture in time.

By RotoRob
This entry was posted on Tuesday, June 2nd, 2009 at 3:10 pm and is filed under BASEBALL, Fantasy Notes, RotoRob. You can follow any responses to this entry through the RSS 2.0 feed. You can skip to the end and leave a response. Pinging is currently not allowed.