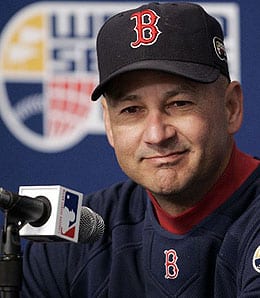 The BoSox have struggled to score lately, so Terry Francona juggled the lineup.

With the BoSox in an offensive funk (13 runs in five games heading into Sunday’s action), manager Terry Francona juggled his lineup, dropping Jacoby Ellsbury from the lead-off spot down to eighth in the order. The change worked, with Boston avoiding a sweep by pounding the Jays 8-2, but if this is a long-term move, Ellsbury owners have to be upset. But the fact is here, he’s struggled to get on base – especially against lefties, so with southpaw Ricky Romero taking the hill for Toronto Sunday, Tito thought the move made sense. Ellsbury, having recently seen his 22-game hitting streak end, was just 2-for-9 in the first two games in Toronto. Sunday, he responded to the move with a single, a walk, and the team’s first sac bunt of the year – making the Red Sox the final team in the majors to record one. We ranked Ellsbury No. 23 on our outfield list, and the fact is that even though he hasn’t had a stellar start – his power, for instance, continues to wane – his performance has easily made him a top 20, probably even top 15 flyhawk so far. Batting eighth will obviously affect this, especially in the runs department, but it could help him in ribbies – a category Ellsbury is already headed towards a career high in. The bottom line here, however, is that Ellsbury really needs to improve his on-base skills if his long-term future will be as a top-of-the-order hitter.

Taking over the lead-off job, at least temporarily – I’d find it extremely surprising if this shift lasts longer than a game or two – was Dustin Pedroia, who has also been in a bit of a funk, entering Sunday’s action in a 2-for-13 skid. Now, the Little Pony didn’t exactly bust out, but his three-run homer broke up a pitcher’s duel in the fourth inning and was the key hit as Boston managed to avoid a sub-.500 record in May. It was also his first dinger since the very first at bat of the season, a good sign for a player who in April didn’t exactly look like the defending AL MVP. In May, however, Pedroia has turned things around, batting .370 with 10 RBI, five steals and some nice extra-base pop. Sure, his power has slipped from the MVP effort of last season, but how about that freaking batting eye? Pedroia has walked twice as often as he’s struck out, and his play last month made him look much more like the player we ranked as the third best second baseman heading into the season.

If you’re seeking outfield help, you might want to take a chance on J.D. Drew. No, he’s not exactly blazing right now – he was 1-for-16 before going 1-for-4 with an RBI Sunday – but he did take over the third spot in the batting order for the struggling David Ortiz. On Sunday, however, with Boston juggling its lineup, Drew moved up a spot to the two-hole to take over Pedroia’s spot. Still, there’s a very good chance Drew will see lots of time in the three-hole (against righties, anyways) going forward, and that makes him a solid Fantasy bet. Batting third in the powerful Red Sox lineup should boost his value over the long haul, so now’s the time to scoop Drew up.

Unless resurgent Jason Varitek gets hurt, there’s no point in considering George Kottaras for Fantasy purposes, but it’s nice to see the Canadian kid getting some action. He earned a bit more PT in May and responded with hits in three of the last four games he appeared in. Kottaras is starting to show more patience, and you’ve got to figure as the season wears on and Varitek needs more rest, the rookie will get his chances more often.

Now that Kevin Youkilis is back, Jeff Bailey is no longer getting to play much, but it’s nice to see him deliver when he gets a chance as he did Thursday, going 1-for-4 with a double and a run. He’s not impressing as he did last season in his brief trial, and there’s really no upside here, but Bailey has managed to match his career high with 10 runs before he soon fades into obscurity.

Julio Lugo is someone we recommended picking up last month, but he hasn’t really worked out as he tries to wrestle the shortstop job from Nick Green in the absence of Jed Lowrie, whose injury has left a big hole in the BoSox lineup. Lugo looked to be earning the lion’s share of the PT, and enjoyed a fine game Friday, going 2-for-3 with a walk, and then he sat on the bench in favour of Green the past two games. Lugo has hit decently since coming off the DL, but I’d like to see him get on base more often. The other issue is he’s struggled defensively the past couple of years. In fairness, he’s spent plenty of that time hurt, but his contract ($9 million this year and next year) means that Boston is probably stuck with Lugo, even though the Sox would love to try to upgrade at shortstop. From a Fantasy standpoint, it’s really hard to justify owning him now unless he’s playing at least five games per week.

By RotoRob
This entry was posted on Monday, June 1st, 2009 at 12:19 pm and is filed under BASEBALL, Fantasy Notes, RotoRob. You can follow any responses to this entry through the RSS 2.0 feed. You can leave a response, or trackback from your own site.