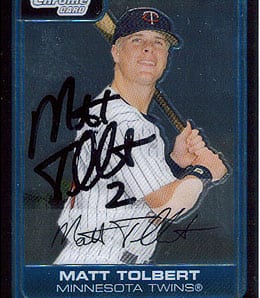 Sorry, that signed Matt Tolbert card is not the ticket to an early retirement.

Despite being shorthanded Tuesday, the Minnesota Twins won the opener of their three-game set against the Cleveland Indians, 4-3, managing to pad their lead over the last-place Tribe to 4.5 games. With their second straight win, the Twins have now moved into a tie for second place in the AL Central with the Chicago White Sox and are now just 3.5 games behind the first-place Tigers. It’s been a truly underwhelming first couple of months for Minny, yet it’s right there in the thick of things for the division title.

Since Alexi Casilla got recalled from Triple-A, Matt Tolbert has been shifted to a utility role, sucking away what miniscule value he had in AL-only leagues. He’s been in a 4-for-26 slump since May 22 and has now been demoted to a utility role. The minors could be next (once Nick Punto returns) for Tolbert, who is struggling to get on base. On Tuesday, with both Joe Crede and Michael Cuddyer out of the lineup, Tolbert and Mike Redmond were the only bench options for manager Ron Gardenhire. Luckily, he didn’t need either of them as the Twins rode another huge night from Joe Mauer to victory.

Taking the hill for the Twinkies in the second game of this series Wednesday will be rookie Anthony Swarzak, recently recalled from Triple-A. We recommended him after his brilliant first start, and while his second start wasn’t quite as dominating, Swarzak still threw a quality outing despite some control problems. He’s been hard to hit so far, but will face a challenge going up against Cleveland ace Cliff Lee. Swarzak, who got nailed with a 50-game drug suspension in 2007 reportedly for smoking weed, really found himself last year when he traded in his roach clip for two-seam fastball. Since then, it’s been smooth sailing for the 23-year-old righty, and Fantasy owners are starting to take note as he’s been gaining traction on the wire. With the Indians’ bats cooling off lately, Swarzak has a chance to rack up a third straight quality start, something that will likely spurn some serious Fantasy interest in him.

Remember when Jesse Crain was one of the AL’s better set-up men? Well, he’s definitely struggling in his efforts to get back to that level. He sucked in April then landed on the DL. Well, maybe he’d be his old self when he returned, right? Unfortunately, he’s been only slightly better in May, the victim of way too many dingers allowed. In fact, Crain is already halfway towards matching his career high in home runs given up – in just 14 2/3 IP. He’s been passed on the depth chart by Jose Mijares and is now an unreliable option in the real world and the Fantasy one.

By RotoRob
Tags: Minnesota Twins
This entry was posted on Wednesday, June 3rd, 2009 at 9:42 am and is filed under BASEBALL, Fantasy Notes, RotoRob. You can follow any responses to this entry through the RSS 2.0 feed. Both comments and pings are currently closed.