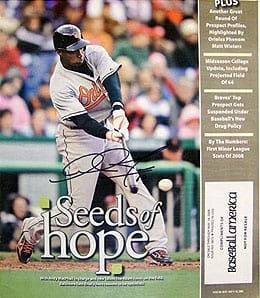 A sore hammy is the only thing that’s slowed down Adam Jones this year, so hang on to that autographed magazine cover.

Adam Jones was expected to be back in the lineup Tuesday, but with his hamstring still a bit tight and the weather rainy, the Orioles wisely erred on the side of caution. Considering the breakout campaign he’s off to, it’s a good call not to rush him back. We were bang on the money when we recommended grabbing him off the waiver wires if he wasn’t drafted. Can you say budding superstar?

Still in Baltimore, the Felix Pie trial clearly isn’t working. He took an 0-for-3 Tuesday (at least he had a walk) and is now 0-for-19 in his last seven games. He showed signs of life at times with the Cubs last season, but this once glittering prospect has been reduced to an afterthought in fantasy leagues. He’s still just 24, so I can’t write him off entirely, but if Pie doesn’t get his shit together soon, the improved Orioles are going to have to make a decision with him.

We’ve got some good news and some bad news for Red Sox infielder Nick Green. While the veteran has done a decent job filling in the past week for the injured Jed Lowrie and Julio Lugo (he’s actually already well exceeded his total of major league at bats from last season), Lugo is on the comeback trail, which will cut short was minuscule value Green had in deeper AL-only leagues. The good news is that with Lowrie requiring surgery that will sideline him for a couple of months, Green is going to stick around the majors for the longest look he’s had in a couple of years.

Most people projected Fausto Carmona to be a great bounce back candidate this season; in fact, we lauded his selection in the 15th round as a great pick. Uh, so far, maybe not. Although he looked slightly better Saturday in earning his first win of the season (six innings, six hits), Carmona was still burned for two dingers and his command (as usual) was crap with four walks against just one strikeout. Yes, he’s just 25, so still has the chance to prove 2007 was the real him, but his command is pathetic. Yes, he’s striking out slightly more batters this season, but is walking way more as well. If you’re a Carmona owner like I am, you likely feel my pain of being near the bottom of the league in WHIP and ERA. He’s getting dumped in shallower leagues, and I find it hard to recommend otherwise at this point.

The Tigers don’t look like they made a mistake in cutting Gary Sheffield free. Since landing with the Mets, the 40-year-old has done next to nothing, other than hit his milestone dinger, of course. Sure, he’s still got pop, but isn’t seeing enough action to justify occupying a roster spot on your team. Dump him regardless of your format.

If Carlos Guillen was dumped in your league after his awful start, you might want to think about scooping him up. The Achilles’ issue he was dealing with is obviously gone as evidenced by a 3-for-4 one run, one double performance Tuesday in which he also swiped his first bag of the season. Guillen, who we recently ranked as the 75th best outfielder, was 2-for-5 with a run on Sunday so is clearly picking up the pace. It was nice to see him get a double, as his extra-base pop has been virtually non-existent in the early going.

Unless you’re in an extremely deep AL-only league, it may be time to part ways with Marcus Thames. He hasn’t played since his ugly 0-for-4, three-strikeout day on Saturday, and while we’re used to not seeing him get on base, the fact that he also has yet to go yard is the clincher. We still think Thames will emerge as one of the better fourth outfielders to own, but until he starts going yard and earning more regular PT, you’re better off picking up someone who can help you.

Brandon Lyon may not have landed the Tiger closer job many expected him to, but I’m not ready to write him off just yet. While he got touched up a bit and suffered another loss Tuesday, he’s actually been quite effective since blowing his only save chance just over two weeks ago. In fact, in 5 2/3 IP since his debacle of a debut, Lyon has given up just four hits and a run. Prior to the season, manager Jim Leyland seemed quite sold on the closer-by-committee approach, so if Fernando Rodney stumbles at all, I think Lyon could get a chance. I think he’s worth another look in AL-only leagues.

Speaking of Rodney, he’s been a waiver wire star since Leyland surprised us all by naming him closer. And small wonder – Rodney has been untouchable. Literally. In five appearances covering five innings, he has yet to yield a single hit. In fact, one measly walk is the only thing anyone has managed against him, hence Rodney’s ridiculous 0.20 WHIP. Having said that, if Rodney does falter and if Lyon is not up to the task, don’t overlook Ryan Perry.

Finally, to cap the mess that is the Tigers’ closer situation, don’t forget about Joel Zumaya. Currently rehabbing at Triple-A, he says his arms feels great — the best it’s been in a year and a half – so once he passes the test of being able to go in back-to-back games (something they will test out this week), he’ll be ready to rejoin the Tigers. I don’t expect Zumaya to regain the closer role immediately – certainly not the way Rodney is going right now – but if you have an extra slot on your AL-only team, now is the time to pick him up and tuck Zumaya away for the time being. He’s going to be a useful asset before long.

By RotoRob
Tags: BASEBALL
This entry was posted on Wednesday, April 22nd, 2009 at 11:32 am and is filed under BASEBALL, Fantasy Notes, RotoRob. You can follow any responses to this entry through the RSS 2.0 feed. You can leave a response, or trackback from your own site.