Blackhawks on a Mission 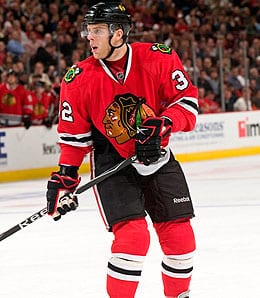 Kris Versteeg, one of the NHL’s best rookies this season, is currently hurting.

Thanks to a Calgary Flames loss Friday night, the Chicago Blackhawks have clinched home ice advantage in the first round of the playoffs for the first time since 1996.

This is a young team that entered the season merely focused on making it to the postseason for the first time since 2002, but its rapid development has Chicago thinking much bigger now. And you can thank the emergence of several key players for this.

Defenceman Duncan Keith has grown into one of the finest blueliners in the NHL. He’s the Hawks’ bulldog on the point, leading the team and ranking ninth in the league with an average of over 25 MPG of icetime, and has responded with a career-best 44 points (including 36 assists), good for a share of 17th among all NHL defencemen. And even better for fantasy owners, Keith has consolidated last season’s brilliant +30 performance with a +32 this season, seventh best in the league. At 25 years of age, Keith is coming into his own as a stud blueliner.

The Hawks’ two games against Detroit this weekend now have much less importance. However, given that the Wings have won all four meetings against Chicago this season, the Hawks definitely would like to make some sort of statement. They would also like to right the ship after losing to Columbus on Wednesday night.

Some consider the Hawks’ young dynamic duo of Patrick Kane and Jonathan Toews as Chicago’s answer to Sidney Crosby and Evgeni Malkin. Kane slumped late last month, and although he has yet to match the point total he put up as a rookie, he’s reached 25 goals for the first time and, at the age of 20, has a ton upside. Toews, on the other hand, has shown very nice progress in his sophomore season. Not only has he stayed healthy this year, but he’s set career bests in goals and assists. This soon-to-be 21-year-old also has a chance to be a very special player.

Another bright youngster, rookie Kris Versteeg, will be missing in action Saturday after he got hurt in practice on Friday. Apparently, Versteeg fell – on how own, with no one around – and crashed hard into the boards, hurting his arm. Uh, yeah. Bad timing, kid. He’s considered day-to-day and may be able to rejoin the team Sunday against Detroit. Versteeg has been among the NHL’s leading rookie scorers this season, logging his 30th assist on Wednesday and scoring a huge overtime goal earlier this month. The 22-year-old is a +15, establishing himself as another young cog on this very talented Hawk squad.

Also missing in action Saturday is Sammy Pahlsson, who returned to California to deal with a personal issue. The Hawks expect him back for Sunday’s game at home against the Wings. Acquired from the Ducks last month, Pahlsson is not an offensive threat, but at the age of 31, he’s added some much-needed veteran leadership for this young team. The fact that he has 64 games of playoff experience and was a member of Anaheim’s Cup winning team in 2006-07 is huge.

The Hawks have faced a tough schedule down the stretch, Wednesday marking their ninth game in just 15 days, so it’s not a big shock that they had a bit of letdown. But the fact that they essentially backed into fourth place takes nothing away from the accomplishment. After all, with 100 points, this is the best team Chicago has had since 1992-93 and it’s just the seventh time in the franchise’s 82-year history that it has reached the century mark in points.

Another good sign for this team is that Patrick Sharp, out the past few games after hurting his knee just over a week ago, is making nice progress. He’s not playing Saturday (but will skate on his own), and probably will sit out Sunday as well, but is expected to be ready to go when the playoffs start next week. It’s been a tough season for Sharp, one of the few veterans on this team. He missed over a month of action earlier this year, and hasn’t been able to come close to duplicating the career year he enjoyed in 2007-08 as a result. Still, with 26 goals and 44 points in 61 games, Sharp remains a vital part of this team’s offense, so the Hawks need him fully healthy for the postseason.

Defenceman Brent Seabrook has been unable to duplicate the offensive numbers he logged last season, but with a career high 23:19 of ice time per game and a personal-best +21 ranking, he’s been a tower of strength on the blueline. Not yet 24, Seabrook is already a seasoned fourth-year NHLer who has plenty more upside.

One of the keys to the Blackhawks’ success this season has been their ability to avoid slumps. Other than a five-game skid in mid-March, this team has proved to be very consistent, posting a winning record in every other month. Even when they faltered last month, the Hawks still went 6-7-2, a mark which hardly qualifies as a disaster.

Chicago will face either Calgary or Vancouver in the opening round the playoffs, but it would be only fitting if it were the Flames, considering that’s the same team the Hawks faced the last time they had home-ice advantage in a playoff series.

And as if the Hawks don’t have enough great young talent, last season’s first rounder (11th overall), Kyle Beach, has made great progress in the WHL this season, scoring 24 goals and adding 39 assists in 54 games. The 19-year-old left winger has been impressive enough to earn a contract with the Hawks’ AHL affiliate in Rockford where he’ll finish out the season and get some valuable playoff experience as a pro.

By the way, the Hawks and Wings are tied 1-1 midway through the second period as we write this.

By RotoRob
This entry was posted on Saturday, April 11th, 2009 at 3:56 pm and is filed under HOCKEY, RotoRob, Team report. You can follow any responses to this entry through the RSS 2.0 feed. You can leave a response, or trackback from your own site.