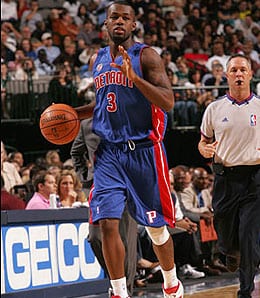 Rodney Stuckey is still starting, but is losing minutes to Will Bynum.

The Detroit Pistons failed to get back to .500 for the first time since late-March as they lost 106-102 in Indiana Saturday, ending a three-game winning streak, the team’s best run in over a month.

The eighth-place Pistons’ recent surge has gone for naught, with the Chicago Bulls surging of late, and soaring over Detroit and into seventh place with their win over the Bobcats Saturday. Saturday’s loss not only ensures Detroit’s first non-winning season since 2000-01, but also seriously damages the Pistons’ chances of regaining the seventh seed and avoiding Cleveland in the opening round. How much do you think the Pacers – a team with an ugly recent history with Detroit – enjoyed hurting the Pistons chances?

Of course, Detroit still has a golden opportunity with the Bulls coming to town on Monday night – a game that will likely seal both teams’ fates.

Clearly, the Pistons’ days of being a power in the East are over. They won 59 games last season – a seventh straight year of at least 50 Ws – but have yet to even reach the 40-win mark this season, with just two games to go. The Allen Iverson trade was a fiasco, making it obvious that it’s time to blow this thing up. Fortunately, there’s been some pleasant developments among some of the team’s younger players, specifically in the backcourt.

Rodney Stuckey has maintained his starting job despite some recent competition from Will Bynum. However, his minutes are down lately (he spent the entire fourth quarter on the bench Saturday) and he hasn’t exactly been lighting up the scoreboard. Of course, 5-for-17 shooting over the past two games will do that. On the plus side, Stuckey continues to facilitate, dropping almost seven dimes per game over the past three contests. And his less than normal workload will keep him fresh come playoff time. Stuckey isn’t getting the same number of touches he did last month, but his owners have to be pleased with the fact that his perimeter game is showing signs of life with five treys in six April games so far. While Stuckey hasn’t exploded like many of us predicted heading into the season, he has made significant progress, becoming a much bigger part of the Detroit offense and showing glimpses of being an outside threat.

Speaking of Bynum, he’s emerged as one of the team’s best players over the past month, gaining nice traction in fantasy leagues as a result. In fact, if you need a last-gasp push, Bynum could provide it for your team. He turned in another fine outing Saturday, scoring 16 points in 21 minutes with six assists, four boards and a key steal late in the game. He was on the floor at crunch time – scoring or assisting on 18 of Detroit’s last 22 points – so it’s obvious he’s truly ingrained himself as a key component of the team. Could you use 15 points and 4.5 assists per game? That’s what Bynum is providing his owners so far in April, and he’s even starting to hoist up the occasional long bomb, averaging one attempt per game from beyond the arc. After spending the past two seasons playing in Israel, Bynum has followed the Anthony Parker model, and like the Raptor guard, looks like he’s back in the NBA for good.

Veteran Richard Hamilton said Saturday’s loss didn’t matter because the Pistons are already in the playoffs and apparently don’t care who they play — according to Rip anyways. Hamilton’s been inconsistent of late, but he brought his game Saturday, scoring a team-high 23 points with five assists, four rebounds and two 3-pointers. Rip only sunk 10-of-23 (missing a key shot with about a minute and a half to play that would have put Detroit up by three), but owners can’t complain, as he’s shot the ball well lately (46 per cent in April). Hamilton also seems to have calmed down from his barrage of long distance shots; last week, he put up 14 treys in a two-game span, but has attempted a much more reasonable seven 3-pointers in the three games since. Although it’s been a strange season for Hamilton, spending some time as the sixth man after having been a full-time starter his entire run in Detroit, he still has managed to get starter-type minutes, with 34 per game. And with 15.5 FGA per game, any thought that AI’s presence would cut into Rip’s touches has also been unfounded; in fact, he’s gotten enough plays to be the team’s leading scorer – something he’s done every single season since landing in MoTown seven years ago. Unfortunately, after enjoying an excellent season shooting the ball in 2007-08, Hamilton has struggled this year.

After enduring his first single-digit scoring night of April on Friday, Tayshaun Prince bounced back Saturday, sinking 7-of-9 from the field and all three of his attempts from the charity stripe for 18 points in 42 minutes. He even had a play called for him by coach Michael Curry out of a timeout with less than a minute to play, however, he had it stolen from him – one of four TOs — and he managed just three boards and one assist with no blocks or steals. Then again, as we observed last month, a lack of steals is nothing new for Prince. It’s a damn good thing Prince was shooting the lights out Saturday, because he’s not getting many touches lately. His 10.5 FGA in April is the lowest it’s been this season, as Prince is being affected by the emergence of Bynum. He’s only scoring 13.5 PPG in April, and unfortunately the rest of his numbers are suffering as well. The durable Prince has enjoyed a fine year – his best since 2004-05 – setting a career high in MPG and FGA, but he’s been generally ineffective when owners need him the most as they battle in their fantasy playoffs.

By RotoRob
This entry was posted on Sunday, April 12th, 2009 at 4:33 pm and is filed under BASKETBALL, Dear RotoRob, NBA Today, RotoRob, Team report. You can follow any responses to this entry through the RSS 2.0 feed. You can leave a response, or trackback from your own site.