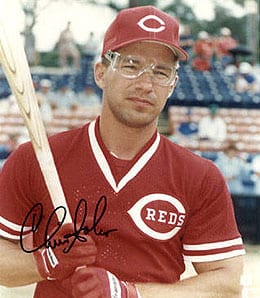 Chris Sabo was the ultimate anti-hero, but you couldn’t help rooting for such a goof.

If you’re fairly new to the game of baseball, you may not remember Chris Sabo, who despite being the 1988 NL ROY and a three-time All-Star, is probably best known for his freaking goofy goggles.

The man was spaz personified, but you had to love him, because he obviously just didn’t give a shit. I mean, come on, in a nine-year career, he made over $10 million, yet he still drove the crappiest car you can imagine, as documented in an article in the Sarasota Herald Tribune on Wednesday morning.

Maybe it’s an old school thing, because certainly no ballplayer today would be caught dead in Sabo’s ride, but even back then he was ridiculed for driving that car, and why not? It was a 1981 Ford Escort that had about 300,000 miles on it. Not exactly the Pussy Wagon, was it?

One-time teammate Paul O’Neill caught a ride with Sabo one day and wanted to hear some tunes on the radio. Sabo’s response? Go for it, as long as you don’t mind holding this broken antenna out of the window. Uh, yeah. Watch out for those lightning storms.

Who is the Chris Sabo of baseball in 2009? Does such a beast even exist any longer? Man, I miss that goofy dude, and hearing stories about his car only serves to build the legend of nerd that was Chris Sabo.

Suddenly, I’ve got this wacky inclination to throw on a pair of goggles and cruise the main street in my beater. Look out, ladies. RotoRob’s on the prowl.

By RotoRob
This entry was posted on Wednesday, March 25th, 2009 at 6:42 pm and is filed under BASEBALL, RotoRob. You can follow any responses to this entry through the RSS 2.0 feed. You can skip to the end and leave a response. Pinging is currently not allowed.