Ice Chips: Time is Running Out 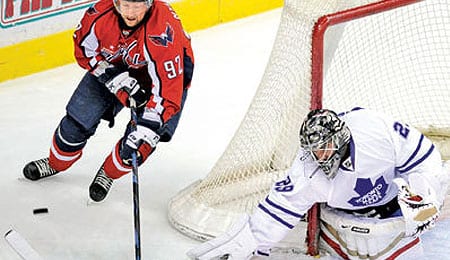 Has Martin Gerber’s suspension left you short in the goaltender department this week?

The playoffs are within our sight. They’re not in the sight of a lot of NHL teams, but that’s not really our problem.

Make no mistakes about it — this is a huge time of year for many of us.

For instance, a lot of people desperate for goaltending went after Toronto’s Martin Gerber, who many predicted would end the NHL season playing in Europe. But Gerber has been decent in Toronto, with a 2.89 goals against average and a .910 save percentage. Gerber was a nice pick-up. Until he shoved a goalie and earned himself a three-game suspension, that is. So now, in the twilight of our season, Gerber isn’t available.

One goalie who is flying a bit under the radar that could help you now, however, is Brian Elliot of the Senators. While his club rookie record eight-game winning streak came to an end Wednesday, Elliot still looked extremely sharp in that game, saving 28 of 30 shots directed at him. In a season that has been an unmitigated disaster in Ottawa, Elliot’s emergence has been a bright spot.

This time of year is like the final 15 minutes before last call. You’re going to grab what’s available and not ask too many questions. That’s why I suspect a lot of people who despise Sean Avery have claimed him for their teams. In 11 games for the Rangers, Avery’s put up four goals and four assists. He’s even a +1 for New York. They’re decent numbers. Decent enough that you can’t really afford to take a moral stand. Sloppy seconds it is!

And truthfully, I’m always surprised to see who’s available in certain leagues. Alex Tanguay is still on the wire in a lot of leagues. And he’s been hot lately, with three goals and five assists in his last four games. And really, isn’t it nice to see something going well in Montreal? Because this time next week, the Habs might not even be in the playoffs.

And how is Kris Versteeg still available anywhere? He’s in an awful five-game pointless streak, but he still has 49 points on the season. And the longer he goes pointless, the more you have to figure he’s due.

If you’re really desperate, I kind of like Tuomo Ruutu. He’s got 50 points on the season and while his reputation is more grit than finesse, he still manages to put up some numbers. And the numbers might be better than existing forwards on your roster.

By Steven Ovadia
This entry was posted on Friday, March 27th, 2009 at 11:55 am and is filed under HOCKEY, Ice Chips, Steven Ovadia. You can follow any responses to this entry through the RSS 2.0 feed. You can leave a response, or trackback from your own site.