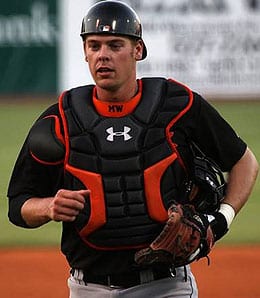 We all know Matt Wieters is a phenomenal prospect, but unless you’re in a keeper league, he’s being drafted way too early.

There I was on a quiet Sunday, buried up to my neck in rankings, when suddenly my good friend Tony Cincotta from FantasyPros911.com asked me if I’d be interested in guesting on his show that evening. How could I turn that one down? Joining us was Bob Taylor from FantasyHurler.com for a fun-filled show as we attempted to wade through numerous topics of interest as fantasy draft deadlines quickly approach.

Among the items we covered was a review of the USA-Japan game (Evan Longoria still can’t hit that breaking stuff, or did I happen to mention that at some point in time?) and a recap of the WBC. We followed that up by reviewing some of the current walking wounded and how those maladies affect their draft status, and then launched into an extensive review of our current Top 10 Closers in Waiting article and First Base rankings.

In addition, we also took some time to discuss a few of the riskier young speculative picks in Matt Wieters, David Price, Elvis Andrus, and Nelson Cruz (well, Cruz isn’t that young, but still is somewhat speculative given his track record). There were some very interesting observations offered, among them my assertion that poor Andrus is going to have to find a way to steal first base to have the value that some anticipate.

You can check out the full show here.

By Tim McLeod
This entry was posted on Monday, March 23rd, 2009 at 4:27 pm and is filed under BASEBALL, Podcast, Tim McLeod. You can follow any responses to this entry through the RSS 2.0 feed. You can skip to the end and leave a response. Pinging is currently not allowed.