The Wire Troll: Montrezl Harrell Coming of Age For Clippers 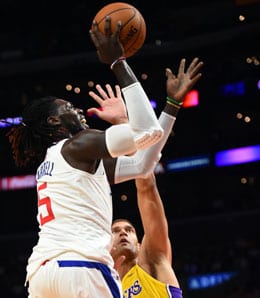 Welcome back to another week of Fantasy basketball. We’ve just passed the NBA playoff eligibility waiver deadline, meaning we are truly in the home stretch. Just five weeks remain in the regular season, so if you’re still in the running, do not let up now. Milk the wire!

This week, tempers flared in Friday’s Jazz-T-Wolves game, leading to five techs and three ejections; Cleveland’s J.R. Smith earned himself a one-game suspension for throwing soup at assistant coach Damon Jones; and Stephen Curry (ankle) had to come out early Friday, but it sounds like it was merely a precaution considering he’s playing golf on Saturday.

Montrezl Harrell, PF, Los Angeles Clippers (ESPN: 8.6 per cent; CBS: 22 per cent): If you’re in a deeper format (14 teams or more) and need an infusion of offense, look no further than Harrell, who is enjoying a breakout recently. After nailing 8-of-9 shots for 19 points in just 16 minutes on Friday, he has now scored at least 12 points in five straight games. Harrell’s been getting to the line a bit more often lately (10 trips in the last two games), and he averaged an assist per game in February for the first time this season. He’s nearly matched his career high in games played, set last season, and has become a key member of the Clippers’ bench now, likely guaranteeing him more PT down the stretch. If you look at Harrell’s per-minute production and consider what he’d do if he regularly got 25 or more minutes, it’s clear he becomes a must grab. He’s already seeing about three and a half more minutes per game over the last five compared to the last 10, and we expect that trend to continue given his performance. Harrell seems a tad undersized as a power forward, but he makes up for that with a massive wingspan and superb athleticism (check out his ability to go to the hole and finish in the video below).

Bam Adebayo, C, Miami Heat (ESPN: 5.8 per cent; CBS: 33 per cent): Adebayo really showed us something Thursday in a blowout loss, canning 6-of-7 from the floor and 3-of-4 from the line for 15 points with 10 rebounds (including six on the defensive end) and two blocks in 30 minutes for his first double-double in nearly three weeks. The rookie hadn’t really been seeing enough PT recently to be on the Fantasy radar prior to this, but needs to be watched now given that he’s been playing at nearly a top 100 level over the last week. Note that he’ll miss Saturday’s game while dealing with a personal matter, but it’s only expected to be a one-game absence. It’s important to note that after several DNP-CDs early on, he’s appeared in every Heat game since late November. Adebayo has no outside game at all, but he did see a bit more PT in February, and if that continues, he’ll be a sneaky asset down the stretch if you need rebounding help.

Trey Burke, PG, New York Knicks (ESPN: 26.5 per cent; CBS: 48 per cent): Burke has been hot lately, scoring at least 12 points in four straight games, while living up to his name by totalling seven treys over that stretch. His PT is up significantly lately and he did better work on the defensive glass last month. The ninth overall pick from 2012 has seen his career go downhill after a nice rookie season, but he’s turning it around this season. If Burke’s three-point shooting can return to last season’s level, he’ll be a fantastic asset down the stretch. With Jarrett Jack done for the season, Burke’s value rises even higher. Burke was second in the G-League in scoring when the Knicks signed him in mid-January, so this career revitalization looks real.

Nemanja Bjelica, PF, Minnesota Timberwolves (ESPN: 8.8 per cent; CBS: 29 per cent): With Jimmy Butler (torn meniscus) out, Bjelica is going to see major PT as evidenced by a season high 45 minutes of action on Friday. He came through with 12 points and two treys, the second time in three games he enjoyed such a line. Bjelica is taking more three-pointers lately, and although he didn’t shoot as well from the line in February, he turned in a 4-for-4 showing Friday as he took off his shorts while taking his charity stripe attempts. Hey, whatever works for you, dude. The third year player didn’t shoot well last season, but looks better than ever in that regard this season. Bjelica is a gritty player, something that will keep him in the lineup even when he’s not contributing on offense.

By RotoRob
Tags: Montrezl Harrell
This entry was posted on Saturday, March 3rd, 2018 at 6:06 pm and is filed under BASKETBALL, RotoRob, The Wire Troll. You can follow any responses to this entry through the RSS 2.0 feed. Both comments and pings are currently closed.