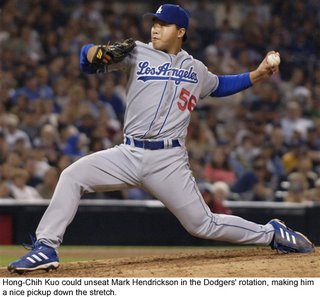 With rosters expanding on Friday, the Dodgers are due promote a number of players. They have already sent up Hong-Chih Kuo and he is likely to take Mark Hendrickson’s spot in the rotation barring a total meltdown. Kuo was sent to Las Vegas and converted back to a starter so he could work on his control. He has been so good that the Dodgers are thinking about leaving him as a starter. Tim Hamulack was sent to Vero Beach in place of Kuo and he will rejoin the Dodgers on Monday.

Others that should make the jump to LA in the next week include James Loney, Matt Kemp, Andy LaRoche and Giovanni Carrara.

The lowest ERA for a starting pitcher in baseball since the All-Star break belongs to (drumroll, please)…Chad Billingsley. Greg Maddux has a 2.37 ERA since coming to LA.

The Dodgers are a team that you won’t see showcasing a lot of rookies in September. That’s mainly because the rookies are largely already on the team and a great part of the reason that LA is on top of the NL West.

John Hill covers the Dodgers at Dodger Hill on the Most Valuable Network. For complete Dodgers’ coverage, visit him at www.http://dodgers.mostvaluablenetwork.com/index.php.