The Wire Troll: David Desharnais Heating Up For Habs 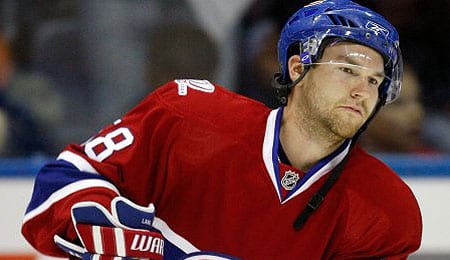 It is hard to believe but here we are — 2014 is upon us and now is the time of waiver wire discontent. With just five weeks until the Olympic break, injuries and depth count more than ever. The strangest thing is there are only a handful of weeks after the break so that playoff move has to start a bit sooner rather than later.

These are the toughest weeks. The days can seem to blend together and can cause extreme Fantasy hockey frustration. Simply put, it is time to take a look at some of those waiver wire picks that may catch your eye for the upcoming week. It is now time for that good old column — The Wire Troll.

David Desharnais, C, Montreal Canadiens: After getting passed on the depth chart last season, Desharnais has surfaced at last, with nine points in his last eight games including his fifth of the season on Thursday (see video below). After being nearly ran out of Montreal about 100 times in 2013, the last few weeks have been kind to the “slight” centre. This run may not last more than another couple weeks so you need to get in on the ground floor while you can before time runs out!

Carl Hagelin, LW, New York Rangers: Hagelin is the type of player that can infuriate you at times, but his raw speed can create offense and even with the Rangers that can benefit Fantasy owners. With 10 goals and seven assists in 33 games, the small, speedy winger is solid enough to at least consider on your team. Please remember that the Rangers have this weird habit of binge scoring and then just vanishing. However, Hagelin’s low ownership rate is enough to rise above that risk.

Dainius Zubrus, C, New Jersey Devils: Sometimes we take gambles in The Wire Troll, and this is a big one, but Zubrus is due. That is especially true after he took a head shot at the hands of Tyler Myers on Saturday. With tilts against Philadelphia and Dallas to start the week, that could mean a quick little bit of Fantasy gold for owners who want to take a shot on Zubrus. He plays first line ATOI (Average Time On Ice) and the point production is not great, but he creates quite a bit of space with his physical style of play.

Ryan Murphy, D, Carolina Hurricanes: Murphy is worth a pickup in the deepest of deep leagues because of his upside more than anything else. The problem in Carolina is that the Hurricanes’ team defense can be leaky and the blame usually falls on the younger guys. People forget that Cam Ward just has not been consistent at all this season. Overall, Murphy only has 11 points in 35 games but he recently enjoyed his first career multi-point effort. Big things are expected of him in the future and with his vision and shot, nobody should be surprised at all.

Andre Benoit, D, Colorado Avalanche: Benoit is another risk, but with 66 blocks and 13 points in 39 games, it seems that he racks up just enough ice time to be a solid fifth or sixth Fantasy defenseman. He has six power play points which means he does see some decent PP2 time. If you need someone and no one looks too appealing on the power play, then Benoit may just be for you.

That is it for this week so good luck and see you next week. As always you can follow me @ChrisWasselTHW and thanks for reading.

Now it’s your turn. Let us know in the comments below who you favourite Fantasy hockey pickup of the week is.

Bergenheim has played very well with 17 points in his last 26 games and to top it off, he has 15 of those in his last 20. The bottom line is this guy is averaging right around five shots per game in his last 10 contests. Bergenheim has played at least 17 minutes in eight of those games and has seen some 19 and 20 minute efforts also. If you are in dire need of some decent scoring depth and shots on goal then Bergenheim just may be your guy. At the very least he is definitely a nice short-term fix.