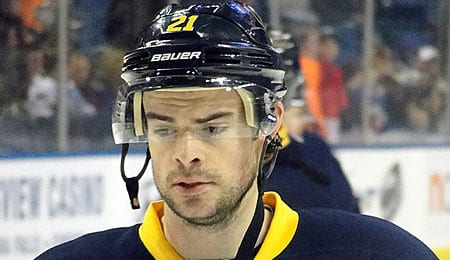 Drew Stafford is one of the hottest players in the league.

Sunday is actually typical for this time of the season. Other than that, it is the usual big Tuesday, Thursday, and Saturday which should make it a bit easier on the average Fantasy hockey owner. Monday and Friday are also a little more beefed up which may make for some interesting sit/start decisions.

This week, we again keep the search lean and trim. The goal is to give you three quality picks from the waiver wire: one forward, one defenseman and one goaltender. Let’s get down to business and please remember last week we basically nailed two out of three. Our many apologies to those of you that picked up James Reimer. We are sorry… now let’s move on.

Drew Stafford, RW, Buffalo Sabres: When we take risks, we like to take some huge risks. But Stafford is one of the hotter players in the league with five goals in his last seven games (including one against the Hawks a couple of weeks ago in which he looked very alert — see video below). What we like is the higher shot and chance outputs. In six of his last 12 games, Stafford had generated four shots or more and multiple scoring chances. Granted, a cold stretch could ensue soon, but he is producing in other categories, including over 20:00 a game of playing time. Stafford is owned in less than 30 per cent of all Fantasy leagues. There is no retreat and no surrender at this stage so what do you have to lose?

Kris Russell, Calgary Flames: Sometimes we seriously wonder what is wrong with Fantasy owners. Russell gets nearly a point every other game, has solid numbers across the board, and plays pretty well in his own end for the most part. Now we understand that he only has five goals, but on the second pairing, that is not so bad. The 21 assists is rather nice and the 150+ blocks is just a bonus. People forget that Russell was a pretty good Fantasy asset in Columbus and now is easily a perennial 30-to-35 point producer for Calgary. That means you should pick him up since he is somehow only owned in 15-to-20 per cent of all Fantasy leagues. Talk about a mystery.

Matt Hackett, Buffalo Sabres: How bad is it in Buffalo? It’s gotten to the point when you just never know who is going to be the starter. Ryan Miller is gone, Jhonas Enroth is injured, Jaroslav Halak arrived and was then dispatched, and now in steps Hackett. Yes, Hackett has lost some of his lustre, but he has some upside. Buffalo is a bad team but playing hard. With the injuries, this may be a chance for the new number one to have a good run. He does have it in him when it comes to short runs. Hackett is owned by less than 1 per cent of Fantasy leagues. What is the worst that could happen? Take a shot, please.

Please keep in mind that the final three weeks of the season are going to be very intense. Injuries keep rising in count and replacements will need to be added quickly. Those who adapt are the ones that will survive and thrive. Ultimately, the strong do win and the waiver wire will be key. Good luck this week!

Bergenheim has played very well with 17 points in his last 26 games and to top it off, he has 15 of those in his last 20. The bottom line is this guy is averaging right around five shots per game in his last 10 contests. Bergenheim has played at least 17 minutes in eight of those games and has seen some 19 and 20 minute efforts also. If you are in dire need of some decent scoring depth and shots on goal then Bergenheim just may be your guy. At the very least he is definitely a nice short-term fix.