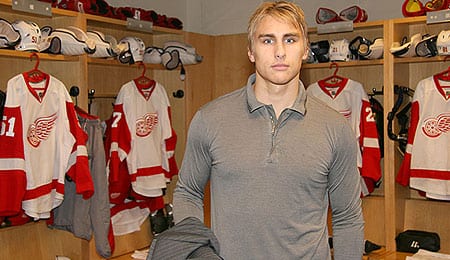 Talking to many people around the Fantasy hockey world revealed several realities heading into the sixth week of the season. The first one is that the injuries have not only forced unexpected pickups, but have resulted in different ways of adapting that have probably never been seen. Below average performances have littered the Fantasy landscape throughout October and into November. Then there are the players that have gone so low it becomes obscenely disgusting.

So what do you do? Where do you go on the waiver wire? Well, we have four players here that could help you right now. This is the time to make some moves like these so here we go.

Val Filppula, C, Detroit Red Wings: Filppula has done something that is a bit surprising in that he’s scoring early. The rap on him was he would go into early season funks, but the 11 points he’s put up so far this season seems to contradict that. While Fantasy owners have been dying for Henrik Zetterberg to wake up, Filppula has been a decent surprise. Now, of course, Fulppula’s ATOI of just 16:26 is an issue, but the five power play points make up for that a little bit. He is only owned in about 20-to- 30 per cent of all Fantasy leagues (Yahoo!, ESPN, etc.) so you may want to hop on this quick.

Dainius Zubrus, C, New Jersey Devils: With Ilya Kovalchuk out of the lineup a bit longer, guys like Zubrus are getting several more minutes of playing time per game. Apparently it is making a difference as the Zubrus has been on a  bit of a scoring binge of late. Six points in six games is solid for a streaky scorer, but most important is that he has been right around 20:00 of ATOI in the last five games and had nearly 25:00 on Saturday against Washington. If Kovalchuk cannot come back this week, pick up Zubrus, who is only owned in around 2-to-5 per cent of leagues out there, and reap the rewards. Basically, get him while the getting is good, as they say.

Ladislav Smid, D, Edmonton Oilers: If you are in a deep league looking for hits and blocks, then Smid is your guy. It just seems that he has a way of not only staying healthy, but blocking shots from every conceivable angle. Smid will get you 20 or 21 minutes of ice time a game, but his 55 blocks and 32 hits are his real calling cards. This is a deep league pickup if there ever was one as he is owned in less than 1 per cent of all Fantasy leagues. In ESPN, Smid gets the dreaded 0.0% ownership. If you are in desperate need for specific category help, then take a shot.

Curtis Glencross, LW, Calgary Flames: This is a guy who seems to start picking it up in November, so be aware, Fantasy hockey fans. Yes, Glencross has only eight points in 14 games while averaging a hair less than 18:00 of ATOI, but something tells us he is due for one of those mini scoring streaks that he became known for last season. When he starts to pick up the game one week, it leads to a good point output the next. His PR15 numbers have heated up enough to warm the flames a bit on the waiver wire. Glencross is still owned in less than 5 per cent of all leagues, but he is a 20-goal scorer who is beginning to find his game again. That is welcome news for Fantasy owners.

As always, the Wire Troll is pointless without you Fantasy hockey fans. So if you have some gems that are riding you to glory, please dispense the knowledge to us. See you next week and good luck in Week Six!

By Chris Wassel
Tags: Curtis Glencross, Dainius Zubrus, Ladislav Smid, Val Filppula
This entry was posted on Sunday, November 13th, 2011 at 3:08 pm and is filed under Chris Wassel, HOCKEY, The Wire Troll. You can follow any responses to this entry through the RSS 2.0 feed. You can skip to the end and leave a response. Pinging is currently not allowed.