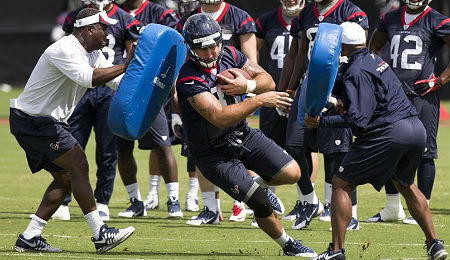 “Sleeper” is one of the most overused terms in the world of Fantasy sports. We all love a good sleeper… admit it, you always have a few in mind as you draft. We always have more than few but we were able to narrow it down to 10. So to complete our 2014 RotoRob NFL Draft Kit we give you 10 players to consider because we think their value will increase as the season progresses.

1. Ray Rice, RB, Baltimore Ravens: If morality runs your Fantasy team, Rice (slotted 27th in our Running Back Rankings) will be off your radar. If you enjoy pouncing on great value, then Rice is your guy. His track record is too good to ignore. Sure, he is an older back (27), but now he has something to prove. The Ravens still realize he is their moneymaker and Rice can also be a nice weapon in the passing game having recorded at least 58 receptions in each of the last five seasons. He’s already apologized to his wife (see video below); now let’s see what kind of apology he can provide to Fantasy owners in terms of 2014 numbers.

2. Dwayne Bowe, WR, Kansas City Chiefs: This is a classic example of a legitimate player that had a down year. In Bowe’s case consider this: Who is the best QB he has ever had throwing him the ball? Matt Cassel? Tyler Thigpen? Damon Huard? Okay clean the puke off your shoes and realize it’s probably Alex Smith. While Smith is still not that impressive at least he has a rapport with Bowe, who we slotted 40th in our Wide Receiver Rankings. Now they should completely understand each other and that can only lead to a better tomorrow. Even though Bowe likes to get a high himself (given his most recent mishap) we still think he is the top option in an economical offense. He will slip in your draft and you could have a top target as your WR3.

3. Ryan Tannehill, QB, Miami Dolphins: We believe the ‘Fins have addressed their o-line issues and now Tannehill will be ready to soar (even though he didn’t crack our Top 20 QB rankings). Obviously, we are not saying he is top five QB. However, Tannehill did double his TD pass production last season, all while enduring a league-high 58 sacks! You would think with some protection this slinger can continue to rise. We think the under appreciated Tannehill will be a starter in most leagues for the stretch run.

4. C.J. Fiedorowicz, TE, Houston Texans: We already made the Fred Biletnikoff reference with Fiedorowicz but we must reiterate that this young dude can catch. With Garrett Graham and potentially Ryan Griffin ahead of him, Fiedorowicz will need to stand out with his touches. Andre Johnson and DeAndre Hopkins will demand respect on the edge and Keyshawn Martin is growing up fast in the slot. All this means single and possibly inexperienced coverage for a rookie TE with web hands and the versatility of Rob Gronkowski.

5. Rod Streater, WR, Oakland Raiders: A concussion early in training camp bumped Streater off draft radars. We know he wasn’t in high demand in the first place, but consider this: Streater posted 888 yards with just 60 receptions for the 27th-ranked passing offense. With the addition of WR James Jones, the maturation of TE Mychal Rivera and an experienced signal caller under centre in Matt Schaub, Streater should easily duplicate if not surpass those numbers. Streater’s deep threat abilities should also find him doing some end zone dances.

6. Ryan Mathews, RB, San Diego Chargers: Contract years can be a funny thing — just look at what happened to Darren McFadden during his last season. Poop or get a one year deal we will say. Mathews is in an odd position considering his age and his past health issues. It may seem unreasonable for a running back like him to have a big final season and get rewarded with a big contract. Mathews is talented and he will be giving every opportunity to show his best side this season. He’s a sleeper because he will probably be drafted outside the top two rounds yet we believe he has the capability of delivering a first round performance.

7. Brandon LaFell, WR, New England Patriots: Last season, we saw something in LaFell. His movements were calculated and his routes were smoother than before as he posted his third season with at least 600 yards receiving despite playing for the 31st-ranked passing offense in the league. Now Tom Brady is his QB. Mix in a healthy Gronk and hard charging Julian Edelman and we love LaFell’s situation. Don’t be bogged down by the micro-fracture-waiting-to-happen Danny Amendola ahead of him on the depth chart. The Bill Belichick scheme warrants many bodies. Once LaFell succeeds in a real game his FAAB cost will throttle upward. Do yourself a favour and draft him with your last pick, to avoid such happenstance.

8. Devin Street, WR, Dallas Cowboys: Our friends at Bloggingtheboys.com believe Street will start the season as the fifth WR on the Cowboys depth chart and will be slowly worked in the mix. Based on our rookie stock report, we see Street contributing 40 receptions or so and finding the end zone at least four times when 2014 is said and done. His dynasty value is obviously higher than his redraft status, granted, but while some think he lacks big play ability, we disagree and see him as crossbreed of Herman Moore and Az-Zahir Hakim.

9. Josh Huff, WR, Philadelphia Eagles: We think Huff will be this season’s Cordarrelle Patterson, meaning he might be ultra quiet early on and then explode in the second half. We actually like Huff more than Patterson as a long-term investment, solely based on toughness. Huff is a hard-nosed kid that knows what Coach Chip Kelly expects having played for him at Oregon. Huff runs with the balance of a running back, yet the WR swagger and flair are still there.

10. James White, RB, New England Patriots: It might seem redundant at this point to name White a sleeper since everyone else seems to be doing the same thing. If you rewind the clock to our NFL draft coverage we were not truly aware of White until after the draft. You see, when the Pats draft someone a little off the radar we usually don’t scold them, we become intrigued and go off and do our research. Our impression of White is that he carved up Big Ten defenses with his flexible ankles and elusiveness. We fully understand that Shane Vereen and Stevan Ridley stand in White’s way on the depth chart. However, we all know that no back is safe from Belichick’s dog house. White will need to use his opportunity wisely and it may take a while, but remember to take him with a late round pick and let him rot like Rudy on your bench until Brady’s bunch summons him to strap on his helmet. Dynasty nerds already know that both Vereen and Ridley are in contract years.

Now it’s your turn. Let us know in the comments below who your favourite Fantasy football sleepers are.

Crave more Pigskin Fantasy chatter? Then join us every Wednesday at 1:30 p.m. EST for RotoRob Fantasy Football Weekly Podcast on Blogtalkradio as we commit personal fouls and chop-blocks for 90 minutes or so each week. This week, check out our special Saturday evening Podcast to help you with your last minute draft preparations. Tune in here.