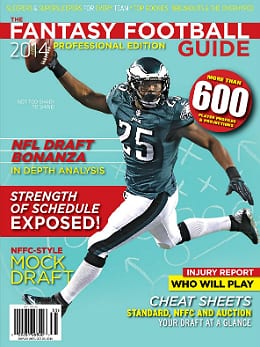 RotoMan’s essential annual Fantasy football magazine, The Fantasy Football Guide, has now been unleashed on an unsuspecting public, and the 2014 version marks a huge milestone as RotoRob himself participated in the actually writing. We’ve been involved in the editing of the pub several times, but this was the first time we felt comfortable enough with our Fantasy football chops to go ahead and write for the book.

Of course, RotoRob.com peeps — past and present — are well represented within the pages of the 2014 Fantasy Football Guide, this year featuring Philadelphia Eagles RB LeSean McCoy, the 2013 NFL rushing champion, as the cover boy.

The present and former RotoRob writers that lent their experience to this project include: Josh Johnson, Nick Wagner, Herija Green, Buck Davidson, Andy Goldstein, Derek Jones and Matt Wilson. Buy Online and Save $1 — on Us! The 2014 Fantasy Football Guide also launched an online version this week, available here. As an added bonus to all our readers, simply use promo code RotoRob14 and you’ll save $1. Yup. You can feel the love, can’t you?

One of the biggest changes this year is that there are new scoring categories for the cheat sheets.

Other features of the 2014 Fantasy Football Guide:

You’d be well advised to forget your pants before this magazine when it comes to things you’re bringing to your draft. Hey, at least if you forget your pants, your league mates’ drafting could be thrown off by your Spongebob Square Pants boxer shorts. But you’ll have the 2014 Fantasy Football Guide, so who will be laughing last? We think you know the answer to that question.

Look for the 2014 Fantasy Football Guide in bookstores near you or purchase it online here with Promo code RotoRob14.

By RotoRob
Tags: RotoMan
This entry was posted on Monday, August 4th, 2014 at 5:19 pm and is filed under FOOTBALL, Magazine promo, RotoRob. You can follow any responses to this entry through the RSS 2.0 feed. Both comments and pings are currently closed.