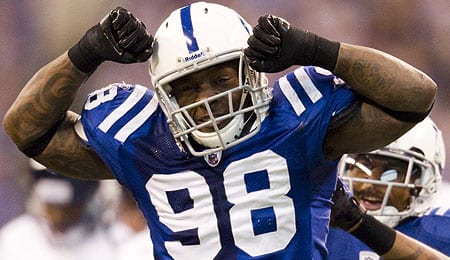 Losing Robert Mathis is a major burn for Indy. (Profootballfocus.com)

On this week’s episode of RotoRob Fantasy Football Weekly Podcast, heard every Wednesday at 1:30 p.m. EST on Blogtalkradio.com, Nick Wagner and Josh Johnson were joined by Trent Davis of Spoonfedsports.com as they discussed which undrafted free agent signees will make NFL rosters. Also Josh’s 10-year old son Henry Johnson stops by to talk about his dear Patriots. Oh, and we broke down the draft for all the AFC squads.

To hear the Podcast in its entirety, simply press the play button below.

RotoRob Fantasy Football Podcast now goes on hiatus until the first week of July, but don’t worry — we’ll have plenty of football content, as we continue to dissect the draft and start to put together the 2014 RotoRob NFL Draft Kit.

By Josh Johnson
This entry was posted on Thursday, May 22nd, 2014 at 11:49 pm and is filed under FOOTBALL, Josh Johnson, Nick Wagner, Podcast, RotoRob Fantasy Football Weekly. You can follow any responses to this entry through the RSS 2.0 feed. You can leave a response, or trackback from your own site.