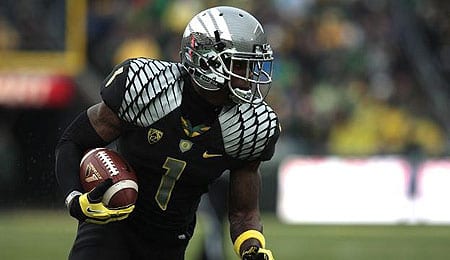 The rookie wide receiver depth this year is so immense we couldn’t fit it all into one article. Last week we assessed the WRs in the first two rounds of the draft. This week. we focus of the rest of field (including one undrafted player we just had to mention).

While you wonder how all these kids will affect their respective teams’ chances throughout the season, we will dissect the rest of the rookie receivers and how their presence may affect the current NFL Superbowl odds for each squad.

Josh Huff, Philadelphia Eagles: Some perceive this pick as Coach Chip Kelly being an Oregon Ducks homer. While we imagine Kelly will be comfortable with Huff, we also really like the kid’s game. Huff plays with amazing balance and he jukes and jives like a tailback. He’s also got some serious speed (see video below). It must be nice to be Nick Foles right about now considering the Eagles also nabbed the uber talented Jordan Matthews. While Huff’s role remains unclear at this point, we think it will progress as the season rolls on. The health and effectiveness of Jeremy Maclin will really determine Huff’s reps.

Donte Moncrief, Indianapolis Colts: How healthy is Reggie Wayne going to be at the start of the season? Depending on his status, Moncrief could be a big factor. It seemed slightly odd that the Colts drafted a wide receiver, but they got great value in Moncrief. Surrounding Andrew Luck with weapons is never a bad thing, but they really need a running back. We think Moncrief can play but he is a WR4 at best.

John Brown, Arizona Cardinals: This small school cat really moves like one. Skills like that scream slot receiver, but let’s not forget Arizona also brought in Tedd Ginn Jr. who has proven he can make a catch when needed. Brown has a hard road ahead but the Cardinals liked him enough to take him 91st overall. As Carson Palmer’s fourth option, Brown can probably be left to the waiver claim junkies to jump on him once he scores his first touchdown.

Dri Archer, Pittsburgh Steelers: Archer offers all speed all day long but can he be effective? He is a big gamble who will provide spurts of excitement and Fantasy owners will gleefully outbid each other for him. Unless you are in a league that rewards for return yards, leave Archer be, we say. The market always crashes.

Jalen Saunders, New York Jets: Rex Ryan and company must really believe in Eric Decker’s size. Why else would they draft 5-foot-8, 163-pound Saunders? The dude is a playmaker but he often crumbles on contact. Some think Saunders can be a return man, but we see him getting crunched in that role. The Jets will likely have a limited role for him as slot receiver. Saunders will need to instill confidence in the Jets before we can cautiously recommend him at all.

Bruce Ellington, San Francisco 49ers: Ellington possess the same kind of energy that a young Santana Moss infused into the NFL. It’s a crowded house in San Francisco for receivers, so it may be a year or two before he blossoms. His speed will work well in 49er attack. He could be a distant dynasty gem.

Shaquelle Evans, New York Jets: Evans displays great field presence and balance and he should easily beat out the whisper-thin Jalen Saunders for reps. We are not sure why there wasn’t more pre-draft buzz around Evans, he seems to have all the tools. We are worried if Geno Smith gets the starting nod at QB for the Jets that Evans might not see consistent touches.

Martavis Bryant, Pittsburgh Steelers: “Smooth as silk” is what we kept saying about this guy on our Podcast. The Steeler coaching staff is already oozing with pleasure as they see him as a starter… just wait to see the love when Bryant dismantles the Ravens. He is the safest rookie to draft in our eyes. Dynasty owners will rejoice when they land Bryant.0

Kevin Norwood, Seattle Seahawks: Last week, we swooned over the other wide receiver Seattle drafted. The Seahawks added Norwood to provide steady depth. Not many talked about his 4.48 40-time or his great hands. That being said, he is not going to be rattling off 30-yard gains all day. Think Jason Avant with a slightly bigger upside. Norwood will have to fight for playing time.

Ryan Grant, Washington Redskin: We are not sure why the ‘Skins even drafted another WR. They obviously scouted him, but if Grant should beat out the old man Santana Moss you can bet RotoRob.com resident Redskin fan Nick Wagner will be ready with a full analysis.

Devin Street, Dallas Cowboys: Street will start the year as the fifth receiver on the depth chart. Once Tony Romo hits him for a 40-yard gain, he will force his way into regular reps. Street has skills like Michael Crabtree — his 4.55 40-time is enough to explode through busted coverages. Street is a dynasty diamond in the making.

Jared Abbrederis, Green Bay Packers: Abbrederis is faster and bigger than Wayne Chrebet. Abbrederis also seems to have the grit of Steve Largent, but let’s not go there just yet. Abbrederis is one of six WRs truly competing in camp. He will see the field, but don’t expect anything consistent.

Robert Herron, Tampa Bay Buccaneers: Amongst the giant pillars that are featured in the Bucs receiving corps, Herron will be that slash of lightning tearing up the middle field. He will be open early and he has the speed to continue to make noise. Herron reminds us of former Saints/Vikings great John Gilliam.

Jeff Janis, Green Bay Packers: Leave it to Green Bay to polish a kid from Saginaw Valley State University with 4.37 40-time. Janis has work to do, but we always trust in the Packer way.

Brandon Coleman, New Orleans Saints: Shutting down Jimmy Graham and Marques Colston will be top priority for Saints opponents. Rookie slot man Brandin Cooks will also be popular. As a result, Coleman should be open. He is 6-foot-6 and he reminds us of “Horizontal” Harold Carmichael. Coleman should not be drafted, but he will be used Drew Brees, that’s for sure.

By Josh Johnson
Tags: Josh Huff, Philadelphia Eagles
This entry was posted on Wednesday, June 11th, 2014 at 7:40 pm and is filed under 2014 RotoRob NFL Draft Kit, Draft report, FOOTBALL, Josh Johnson, Rookies. You can follow any responses to this entry through the RSS 2.0 feed. Both comments and pings are currently closed.