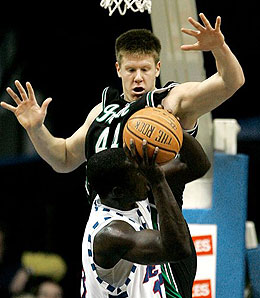 Luke Harangody is an intimidating presence in the post. (AP Photo/Brian Kersey)

[Note from the Editor: This is the 1,000th post in the history of RotoRob.com. A quick thanks to all our readers, all our writers and the rest of Team RotoRob. Okay, enough blathering…on to some college hoops. By the way, stay tuned for our March Madness Preview, coming soon.]

If you see Luke Harangody in street clothes on the campus at Notre Dame, you might think he suits up for the football team. The 6’8″, 251-pound sophomore looks like a fullback or linebacker as opposed to a forward for the Fighting Irish’s tourney-bound hoops team.

Harangody was told coming into Notre Dame that he may never see any playing time and spend his career on the bench. But now, just a sophomore, he has proved everyone wrong and come up big. He currently averages 21 points as well as pulling down 10 boards per game in the tough Big East Conference. Despite Notre Dame’s loss to Louisville last Thursday, Harangody poured in an incredible 40 points on 16-for-28 shooting from the field. Just to make sure people knew there were more aspects to his game, he pulled down 12 boards as well. Before this contest, he had never made a three-pointer in his college career. But he stepped up and knocked down 3-for-4 from beyond the arc, helping turn what once seemed a blowout into a nail biter at the end.

While it is doubtful the impressive Harangody will go pro after this season, look for him to be even more of a force next season. If he can continue his hot streak behind the arc, he could be a more diverse version of Kyle Korver with more tools if he makes it to the league.

For how much success the Gonzaga Bulldogs have had the last decade, there sure isn’t much talk about them from Spokane.

The Bulldogs wrapped up at least a tie of the West Coast Conference last week with a win over previously ranked St. Mary’s, and then followed that up with a thrashing over Santa Clara on Monday to finish their regular season at 24-6. Believe it or not, they finally re-entered this week’s rankings for the first time in over three months.

The Bulldogs are paced by Matt Bouldin, who is scoring 13 points per game and just poured in 21 in the win over St. Mary’s. But the real intrigue on the team is star guard Jeremy Pargo. His brother Jannero is already a back-up guard in the NBA to Hornets’ guard Chris Paul, and the younger Pargo hopes he can make it to the league as well. Pargo currently averages 11.8 points per game as well as a hefty 6.2 assists. While only a junior, don’t be surprised to see him bolt for the pros after having a successful campaign this season.

What’s not to love about the number one team in the nation (UNC) facing the number five team (Duke)? A scouts dream!

Watch National Player of the Year candidate Tyler Hansbrough take on Greg Paulus as this game decides who wins the ACC outright as both teams currently sit at 13-2 in conference.

You gotta love this rivalry, even if (like me) you actually hate both schools. (Do what I do, just wait until the second half with three minutes left and whichever team is losing, half-heartedly cheer for them.)

By Daniel Olson
This entry was posted on Wednesday, March 5th, 2008 at 1:29 pm and is filed under BASKETBALL, College sports, Daniel Olson, The Bench Warmer. You can follow any responses to this entry through the RSS 2.0 feed. Both comments and pings are currently closed.