The Bench Warmer: Lee-n on Me 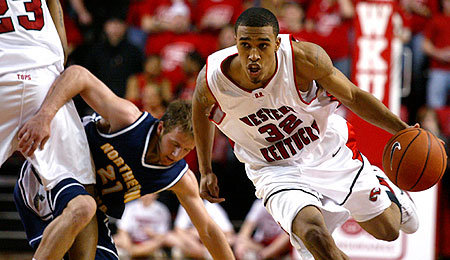 Thanks to the superb play of Courtney Lee, the Hilltoppers have the NCAA Tourney in their crosshairs. (Greg Barnette)

The Western Kentucky Hilltoppers are not typically top of mind when it comes to college basketball. In fact, what is a Hilltopper? That being said, they currently sit at 18-5 and are tied for first in the Sun Belt Conference. The reason? Senior guard Courtney Lee.

Lee has reached double figures in every contest this year except for one win against Middle Tennessee State when he was in foul trouble. He is averaging over 21 points per contest, as well as hauling in a respectable 4.1 rebounds per game. Some of Lee’s best games this season have come against formidable non-conference opponents. Against Gonzaga, Michigan, and Tennessee, he scored 21, 22, and 23 points respectively, proving that he could do damage against the big boys and not just feast on the small Sun Belt Conference. Lee has already been projected as a mid first round pick in the upcoming NBA draft, and he has a great shot at moving up even higher if his Hilltoppers reach the NCAA tournament and he can make some noise.

The 6’5″ Lee shoots nearly 52 per cent from the field, also showing uncanny NBA range from downtown. If you have not heard of him until now, it might be wise to put him on your watch list.

I almost feel bad calling them the team of the week, with their storied history and 100 national championships between all of their men’s and women’s sports. But the UCLA Bruins deserve it. Many thought the Bruins might be vulnerable in the Pac-10 after a loss to rival USC. How did they respond? With an 84-51 thrashing over previously ranked Arizona State, and then an 82-60 whoopin’ over also previously ranked Arizona. Sitting at 8-1 and in first place in the Pac-10, they are clearly in control.

Even with the injury to forward Luc Richard Mbah a Moute, the Bruins look to continue their recent four-game winning streak against 17th-ranked Washington State on Thursday. Will the Cougars’ pesky defense be able to contain Kevin Love, or will the future NBA star dominate the Cougars as fiercely as he did in the first matchup between the squads?

This rivalry game is always intense, but it should be even bigger this time around as Duke sits at number two in the nation and UNC at number three. If Duke wins, it will have a nice pad in the ACC, but if UNC wins, the Heels will immediately take over the lead in the ACC. Look for Tyler Hansbrough to step up his game for UNC and Duke’s Greg Paulus to stretch the defense.

By Daniel Olson
This entry was posted on Wednesday, February 6th, 2008 at 2:47 am and is filed under BASKETBALL, Daniel Olson, The Bench Warmer. You can follow any responses to this entry through the RSS 2.0 feed. You can skip to the end and leave a response. Pinging is currently not allowed.