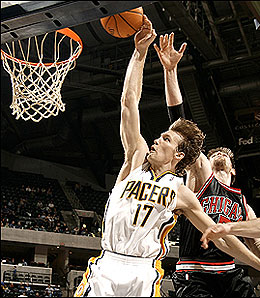 When the MVP candidates are being discussed, few are talking about Kevin Garnett, especially since he’s having his worst season in over ten years. But who has played a bigger role in his team’s success than KG? In today’s Daily Dose we explore this scenario.

Apparently, there’s no need to sweat it over Tracy McGrady’s shoulder or ankle; how freaking good has Mike Dunleavy been this year?; the Cavs will soon have Daniel Gibson back, but Ben Wallace will be out a bit longer; and Chris Kaman is back and he made an immediate offensive contribution.

Tired of hearing about the seemingly endless troubles at CNet? Yup, so am I. Instead, why not bask in some NBA fantasy tidbits in today’s Dose before you slink off and enjoy the Sweet 16?

By RotoRob
This entry was posted on Thursday, March 27th, 2008 at 12:54 pm and is filed under BASKETBALL, NBA Daily Dose, RotoRob. You can follow any responses to this entry through the RSS 2.0 feed. You can skip to the end and leave a response. Pinging is currently not allowed.