Under the Radar – The Import Report 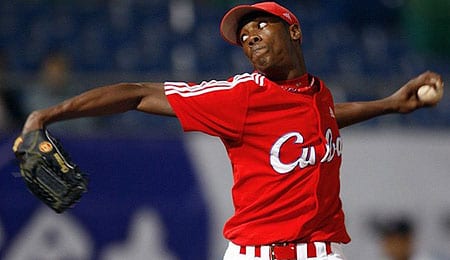 While Aroldis Chapman is getting most of the attention, there are plenty of foreign imports that deserve examination.

Each and every year we see a steady influx of players from both Japan and Cuba venturing to North America and this offseason has been no exception. Aroldis Chapman, the flame throwing Cuban southpaw, has been the focus of most of the media attention as of late and has recently signed on with the Cincinnati Reds for the next six seasons. Now that the much vaunted Chapman has signed, that still leaves a slew of import talent that bears reviewing and has been for the most part flying under the radar. Let’s take a quick look at some of the off-season talent looking to ply their trade in the majors in 2010.

Ryota Igarashi, New York Mets, RP: The Mets recently signed Igarashi, one of the two NPB free agents looking to make their mark in the Show this year. The Met bullpen is in disarray and they are sorely going to need the 31-year-old to step up and fill a set-up role in 2010. Igarashi certainly has the tools and the mentality for the job with that mid-90s high heat. In 2009 for the Yakult Swallows he managed three saves and 29 holds. As a closer in 2004, he racked up a stellar 37-save effort. Igarashi has a history of being able to get the job done and Met fans better pray that he transitions well to the North American game as they are going to need his arm in the worst way this season.

Colby Lewis, Texas Rangers, SP: It appears that Lewis’ career has now come full circle with his recent signing of a two-year deal with the Texas Rangers. Lewis was originally selected by the Rangers in the first round (38th overall) of the 1999 amateur entry draft. He was rushed to the show and struggled in his initial appearance as a 23-year-old, subsequently blowing out his shoulder and missing most of the 2004/2005 seasons. After struggling to return to form, Lewis made the move to Japan and found his game with the Hiroshima Toyo Carp. He has been the leading strikeout pitcher in the NPB Central League two years running, amassing 369 Ks in 354 1/3 IP. What is even more impressive is his control, with a scant 27 and 19 free passes over those same two seasons. Get on the train, guys, because this one’s leaving the station and there are currently way too many vacant seats.

Scott Atchison, Boston Red Sox, RP: The recently-signed Atchison is also returning from Japan, where he posted a 1.70 ERA while allowing 60 hits and 20 walks in 90 IP for the Hanshin Tigers last year. In a set-up capacity, he also was amongst the league leaders with 30 holds. The Red Sox international scouting group, led by Craig Shipley, has made another excellent foray into the Japanese market with this signing. Look for Atchison to be a solid complement to both Daniel Bard and Hideki Okajima in the Red Sox bullpen in 2010.

Hisanori Takahashi, FA, SP: The crafty veteran of the Yomiuri Giants declared his free agency and is still looking for a home in the majors. Takahashi sports an average fastball complemented by an excellent screwball. He’s been a starter for most of his career, but as recently as 2006 he did manage 15 saves in a relief capacity. There is always a demand for left-handed pitching, so anticipate a signing sometime in the next couple of weeks. A clear definition of Takahashi’s role will be needed before we can determine how he fits into Fantasy plans for the upcoming season.

Noel Arguelles, Kansas City Royals, SP: The Royals actually found some time this offseason to sign someone other than aging outfielders and mediocre middle-infielders. They recently signed Arguelles, a 20-year-old Cuban southpaw, to a five-year deal worth a rumoured $7 million. Included in his repertoire is a solid fastball in the low 90s, complemented by a changeup. Arguelles will probably report to High-A ball this season where he will begin his journey to the bigs. For those Fantasy players that partake in deeper dynasty leagues, he is certainly an intriguing option that shouldn’t be overlooked.

Julio Iglesias, Boston Red Sox, SS: Boston’s signing of Marco Scutaro is purely a stop-gap measure, as it eagerly awaits the arrival of the 20-year-old Iglesias. His glove is already MLB ready, but he does need some work with the stick. Once the bat develops, watch for Iglesias to be a fixture in the middle of the Boston infield for many years to come. Assuming we see improvement in both his patience and strike zone judgment in the minors this season, a September call-up for this young phenom could be in the cards.

Yuniesky Maya, FA, SP: The 27-year-old was the Cuban league Pitcher of the Year in 2008, his last full season there. Maya finished second in the league with a 2.22 ERA, first in complete games with seven, and second in strikeouts with 119. He brings a great low-to-mid-90s heater with solid secondary pitches. The rumour mill had the Mets and the White Sox in the running for Maya’s services, but I’d have to give the edge to Kenny Williams and the Sox with their history in the Cuban market. Maya has the potential to be a huge asset as a No. 3 starter in 2010. This is one player deserving of our attention pending his eventual destination.

Yadel Marti, FA, SP/RP: WBC fans should have no trouble in remembering the name Yadel Marti. In the inaugural event in 2006 he was named to the all-tournament team after posting one win and two saves while not allowing an earned run in 12 2/3 IP. He has since left Cuba and was showing off his talents this offseason in the Dominican Winter League. In 31 1/3 IP with the Tigres del Licey, he had allowed 29 hits and six walks to go along with a 3-1 won/loss record and great 2.30 ERA. Control is the name of the game for Marti. The 30-year-old has a very unique motion that is certain to cause problems with hitters from a timing perspective — at least initially. He could eventually be an asset in either middle-relief or as a bottom of the rotation starter, but should be on the radar depending on where he eventually signs and what his role will be.

Whether he’s the next Daisuke Matszuka or Hideki “Fat Toad” Irabu, Junichi Tazawa is bringing his share of controversy to the majors. (AP photo) Back in an article in early September we advised the world of the impending free agency of Junichi Tazawa, the starting pitcher from Nippon Oil Eneos of the Industrial Leagues in […]

Thanks to the Philadelphia Phillies dispatching the upstart Tampa Bay Rays, baseball is over on this side of the world, but in Japan, the NPB version of the World Series is just heating up. The Seibu Lions and Yomiuri Giants are engaged in a good old fashioned barn burner, with the series squared at a […]

BoSox Looking to the East Again

In some recent news coming out of Japan, it seems the Boston Red Sox are seriously pursuing amateur free agent Junichi Tazawa, currently pitching in the Japanese Industrial Leagues. Also rumoured to be interested are the Mets, Braves and, of course, most NPB teams. The 22-year-old righthander is enjoying a solid year for Eneos Oil and is […]

In a report over at Japanball.com Monday, Koji Uehara, after finally attaining free agency, announced his intention to pursue a career in North America in 2009, a development that should surprise no one. Contrary to some reports currently surfacing, Uehara does not have any arm problems at this time. He is also not looking going […]