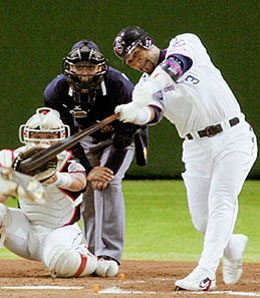 After setting a league record for hits in a season, Alex Ramirez landed a free agent deal with Yomiuri. (Kyodo Photo)

With the holiday season now behind us, let’s take a quick look at some of the recent happenings around the NPB.

It has been a very busy offseason over in Japan, with the Yomiuri Giants – the “evil empire” of the NPB – being front and centre in the news. The Yankees might have written the book on how to buy a championship, but the Yomiuri Giants stole most of the pages this winter. The Giants added three top tier free-agents in Marc Kroon, Alex Ramirez, and Seth Greisinger to an already impressive lineup that managed to win the Central League title in 2007.

The acquisition of Kroon will allow Yomiuri to slide Koji Uehara back into the starting rotation for 2008. Uehara will be eligible for free agency after another eight days of service time and is in all likelihood heading to MLB for 2009. This past season, Ramirez set a new league record for hits with 204 and led the league with a whopping 122 RBI. Greisinger went 16-8 with a 2.84 ERA for Tokyo Yakult in 2007.

As it sits right now, barring catastrophe, you can pretty much pencil Yomiuri in for another Central League title in 2008.

One of the top potential free agents this past offseason was closer Hitoki Iwase of the Chunichi Dragons. Iwase elected to not exercise his free agent rights and recently re-signed with Chunichi for one year. Offered both a one- and a four-year deal, he chose the shorter deal, explaining that this will allow him time to more carefully look at his future this coming year. This one sounds an awful lot like the Hiroki Kuroda situation that occurred in 2006. With three consecutive seasons of 40 or more saves and a career ERA of 1.97 in over 500 appearances over nine seasons, should Iwase decide to venture to MLB he could very well be a top acquisition heading into 2009.

Softbank Hawks’ righthander Kazumi Saito has finally decided to have surgery to repair his damaged right rotator cuff. This past year, he had a 6-3 record with a 2.74 ERA in only 12 starts, and, as we discussed in May, he chose to attempt to rehab his shoulder muscle fatigue rather than taking the surgery route. This is a major setback and will probably mean another short season, if he pitches at all in 2008. For those hoping to see Kazumi playing in MLB real soon, I think those plans better be revised.

In early December, the Hanshin Tigers’ hard tossing closer Kyuji Fujikawa formally advised his team of his desire to pitch in the majors, as early as the 2009 season. Team owner Tsuneaki Miyazaki’s response was, “We will never consider using the posting system for him.” Fujikawa currently has another four-plus years before heading into free agency. Now, this is the same team that posted Kei Igawa following the 2006 season, so there is at least some history here that Hanshin is willing to use the posting system, but at this time it looks like Fujikawa will be looking at MLB much further down the road than he’d prefer. This past season, he tied the single-season record with 46 saves to go along with a stellar 1.63 ERA (although, believe it or not, that was his worst ERA over the last three seasons). Even more amazing, over the past three seasons, Fujiwaka has struck out 376 in only 254 2/3 innings with a mere 35 earned runs. These are truly staggering numbers, leading one to easily understand Hanshin’s position on that posting request.

Speaking of interesting rumours, the current scuttlebutt concerning Yu Darvish is certainly a gem. Reports surfaced that he was heading to the Yankees through the posting system for 2009. Squash this one right quick. The 21-year-old, coming off both a Pacific League MVP and Sawamura Award this past season, has another six years before he’ll attain free agency. Last year, Darvish went 15-5 with a 1.82 ERA and a league-leading 210 strikeouts.

What I do consider very interesting is that even if he completes the full nine years to attain free agency and has the desire to pitch in North America, he would still only be 27 at that time. A posting could be possible in the future, but certainly not as early as 2009. Prior to Christmas, Darvish re-upped with the Hokkaido Nippon Ham Fighters on a contract that will be paying him 200 million yen for 2008. To put this in perspective, Ichiro, Hideki Matsui and Dice-K all took six years to reach the 200 million yen mark. Darvish is the youngest player to ever reach that salary level.

After the furor last year with Dice-K, Igawa and Akinori Iwamura all moving to MLB through the posting system, this offseason has been a very quiet one. In fact, there have been no postings at all. Three top candidates, Koji Uehara, Shinnosuke Abe, and Tomo Nioka, are all property of Yomiuri, a team that steadfastly refuses to use the posting system.

Lotte Marines right-hander Hiroyuki Kobayashi had requested a posting this offseason but was turned down. Coming off three double-digit win seasons and a 2.69 ERA in 2007, the 29-year-old Kobayashi should be on the radar heading into the fall of 2008. Combine that with the younger players who are simply too young and valuable, and it was just one of those years.

Wrapping this up, let’s take a moment to congratulate the Japanese side for its recent success in the Asian Olympic qualifier. Team Japan was led by the “kiddie corps” pitching trio of Hideaki Wakui, Yu Darvish, and the elder statesman of this group at 22, Yoshihisa Naruse. They swept all three games, earning a ticket to Beijing this summer. Combined, this group went 48-10 in 2007.

Add to that rotation the veteran presence of Koji Uehara , with Kenshin Kawakami and Hiroyuki Kobayashi in middle relief and possibly two of the best closers on the planet in Iwase and Fujikawa. While the offense this time around would be lacking in the power department, little ball and that pitching will be the keys to a podium finish.

By Tim McLeod
This entry was posted on Friday, January 18th, 2008 at 7:38 pm and is filed under BASEBALL, Japanese baseball, Tim McLeod. You can follow any responses to this entry through the RSS 2.0 feed. You can skip to the end and leave a response. Pinging is currently not allowed.