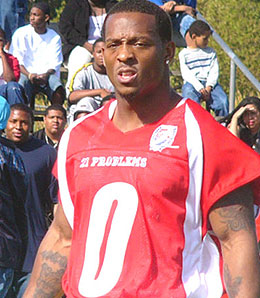 Derrick Dockery is a key acquisition in the Bills’ attempt to remake their offensive line. What? Football isn’t on your radar yet? What’s that about the Final Four? Baseball? The NBA? Bah, humbug. Football takes a back seat to no sport, even if it’s just some free agent signings! Alright, whatever. You know you want […]

Leonard Davis may not have as big an impact on the Cowboys as they think. While the NCAA tournament putters along (yes, I’m already eliminated in my pools, thank you very much, Texas), it’s time for me to turn my attention back to the footballers. The free agency period has died down recently, which means […]

The Jets could take a look at Texas cornerback Aaron Ross with their first round pick. Time to finish up my preview of the first round of the 2007 NFL draft, from a fantasy football perspective. Part I, Part II, and Part III can be found, um, there, there, and there. Ahem, anyway, on to […]

Jacksonville would love to land OSU’s Ted Ginn Jr., but he’ll likely be gone by the time the Jags are on the board. As the NFL draft gets closer and closer, I’ve been going over what each team will do with their first round selections. Part I is here, and Part II can be found…right…here. […]