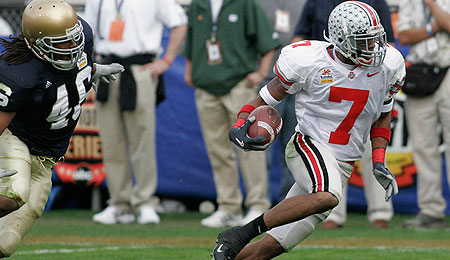 Jacksonville would love to land OSU’s Ted Ginn Jr., but he’ll likely be gone by the time the Jags are on the board.

As the NFL draft gets closer and closer, I’ve been going over what each team will do with their first round selections. Part I is here, and Part II can be found…right…here.

Expert’s Whispers – After a disappointing 2006 campaign, the Jags need to find a spark in this draft. Unfortunately, pick 17 doesn’t afford any guarantees in that department. Ted Ginn Jr. (WR, Ohio State) is on the radar, but he’ll probably be gone by this pick. Charles Johnson (DE, Georgia) could be a good pick to add depth to an already strong defensive line.

Fantasy Owner’s Dream – Pardon my language, but hell if I know. I have given up on trying to figure out the Jaguars. They are easily the most maddening, inconsistent group in the league. Fantasy owners shouldn’t want a Ginn or Dwayne Jarrett (WR, USC) to go to Jacksonville because that passing game is already too crowded. They don’t need a running back, and no offensive lineman or quarterbacks are worth this pick. If I were the Jags, I’d look to trade up to snag Brady Quinn (QB, Notre Dame), or trade down to amass more defensive depth.

Expert’s Whispers – Obviously, all the experts are projecting a defensive selection, which makes sense considering the Bengals have all the pieces in place with their offensive skill players and no offensive lineman (always a need for every team) that will be left are worth a first round pick. Anyway, Patrick Willis (LB, Ole Miss) and Darrelle Revis (CB, Pittsburgh) could be the selection.

Fantasy Owner’s Dream – Oh well, I guess once you have the top fantasy quarterback for 2007 (set in stone), a top six running back, two top 15 wideouts and another wide receiver who could fill in for your fantasy roster, it’s okay to take a defensive player. Wait, what am I saying?! There’s always room for more! The Bengals do need a playmaking tight end after all. Greg Olsen (TE, Miami)!

Expert’s Whispers – After a magical 2006 season, what could possibly go wrong for the feel-good Titans?! Vince Young was the man, and the defense improved with every game. Of course, there’s one little problem: Pacman Jones is insane, and now the Titans want to move him. If he does go, look for the Titans to take a cornerback in round one. Leon Hall (CB, Michigan) or Revis (CB, Pittsburgh) are possibilities.

Fantasy Owner’s Dream – Young might ‘just win football games,’ but his passing statistics could use some work. Namely, the completion percentage of 52 must go up. What better way to help this than with a potential-laden Jarrett (WR, USC)? He and Young could grow into quite the tandem.

Expert’s Whispers – Tiki Barber’s retirement will have very little effect on the way the Giants draft. Not only did Brandon Jacobs prove he could be a feature back, the G-Men also are reportedly interested in trading for Willis McGahee. All of this being said, that’s no excuse for the experts to put up bland predictions like Revis (CB, Pittsburgh) or Aaron Ross (DB, Texas).

Fantasy Owner’s Dream – Having talented running backs is awesome. Having a dominating offensive line is awesome…er. Ben Grubbs (OG, Auburn) could work out; or, instead of having an annoying McGahee and Jacobs ‘running-back-by-committee,’ trade one, move up, and snag Levi Brown (OT, Penn State). See, this is all very easy.

Expert’s Whispers – Mostly defensive whispers for some reason. Jarvis Moss (DE, Florida) and Johnson (DE, Georgia) are on the radar.

Fantasy Owner’s Dream – How about, you know, a dominating run game? Wasn’t that the catalyst for the Broncos Super Bowl victories? Do we really have to go through another ‘And watch out for this undrafted rookie because Mike Shanahan really likes him’ preseason? I say the Broncos trade up and snag Marshall Lynch (RB, California).

Expert’s Whispers – The Cowboys could really use some offensive line help. Grubbs (OG, Auburn) or Arron Sears (G, Tennessee) seem to be the prime targets.

Fantasy Owner’s Dream – That works for me. Not only will it boost that annoying running game, but it would give Tony Romo some added protection. Of course, the Cowboys like to move the pocket, which takes the pressure off the offensive line anyway. So, maybe a wideout like Jarrett (WR, USC) or Dwayne Bowe (WR, LSU) would make even more sense.

Fantasy Owner’s Dream – With Tony Gonzalez’s career winding down, any receiving option would be a plus. Jarrett is probably the front runner, but it’ll just come down to the Chiefs scouts getting the right guy.

Expert’s Whispers – Talking about wide outs, the Patriots could use one as well. Jarrett (WR, USC) probably won’t be around, so the pickings will be slightly slimmer. New England has the advantage of possessing the 28th overall pick as well, which might mean it goes with defense at this pick and takes a wideout later.

Fantasy Owner’s Dream – The Seahawks gave away that first round pick for Deion Branch, so the Patriots have plenty of options. Personally, I’d like to see them go for two wideouts. Chad Jackson won’t be ready for opening day, which leaves the Pats with, umm, Troy Brown at wide receiver.

That’s all for now! The final part, and my struggle against talking about the Colts, comes to a head on Thursday, so stay tuned for that.

By Andy Goldstein
Tags: 2007 NFL Draft
This entry was posted on Sunday, February 25th, 2007 at 3:52 pm and is filed under Andy Goldstein, Draft report, FOOTBALL, Gridiron Goldstein. You can follow any responses to this entry through the RSS 2.0 feed. Both comments and pings are currently closed.