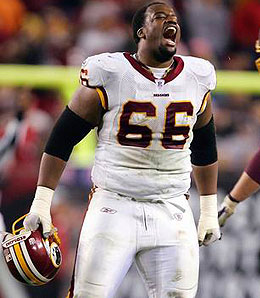 Derrick Dockery is a key acquisition in the Bills’ attempt to remake their offensive line.

What? Football isn’t on your radar yet? What’s that about the Final Four? Baseball? The NBA? Bah, humbug. Football takes a back seat to no sport, even if it’s just some free agent signings! Alright, whatever. You know you want to read this. We already examined the NFC East last week, let’s move over to the AFC East now.

The Skinny – At least you can’t accuse the Bills of having a boring offseason. Between free agency and trades, they have essentially replaced a quarter of their starting team. And, as is often the case, some of the moves are clearly positive, and other…not so much so. The additions to the offensive line will be under the microscope since stud (?) back McGahee skipped town. If the run game doesn’t work, it will put added pressure on J.P. Losman and the Bills aerial attack. Oh, and they need to keep that Losman guy’s jersey clean as well. Unfortunately, the loss of Clements will be hard to overcome. The Bills will probably address this position in the draft, but no one coming out of school will be as polished as the current 49er is.

The whole McGahee thing is probably being slightly overblown. Other than the second half of the 2004 season, the former Hurricane has looked like anything but a stud back. Some of that could be attributed to the porous offensive line, but quality runners make plays even with a sub par offensive line. Interestingly, McGahee’s value probably would have increased had he stayed in Buffalo. The offensive line improvements would have benefitted him immensely. Meanwhile, Baltimore’s once dominant offensive line is aging and clearly not what it used to be. The onus is squarely on McGahee’s shoulders.

The Skinny – The most disappointing NFL team from a fantasy perspective was easily the Dolphins. No one really emerged as a reliable player, despite the high hopes placed on Ronnie Brown and Chris Chambers. And what did the Miami brass decide to do to rectify the situation? Well, nothing really. Saban happened to weasel away, but the powers who are didn’t really make any moves other than bringing in Porter. All I can do is shrug and say ‘Maybe next year.’

Key Signings – Well, just look for yourself here. There’s not enough e-space to list them all.

The Skinny – Well, no one should worry about the Patriots getting complacent with three titles. They brought in a number of players and re-signed just as many. Most notable for fantasy purposes is Dont’ Stallworth, who proved last year in Philly that he can be a dangerous player even as a top option. He and Wes Welker (acquired from Miami in trade) will help Tom Brady move up some pre-season cheat sheets. Meanwhile, Adalius Thomas should be a focal point to a defense that could regain its past prominence as a fantasy force. As for the departures, only Graham will have much of a fantasy impact, and it’s not exactly a positive one. Denver tight end Tony Scheffler was a prime sleeper candidate, but Graham’s presence muddles the situation.

The Skinny – There’s really not too much to talk about with the Jets. On the one hand, they had a successful year and nearly made the playoffs, so I hesitate to come out and slam them. But, on the other hand, if the J-E-T-S Jets, Jets, Jets think they are a marginal upgrade at running back away from contending for a Super Bowl title, they are probably mistaken. How about some defensive play makers? How about clearing a path for your only exciting offensive player (Leon Washington)? It was just a sadly disappointing free agency period for this team.

By Andy Goldstein
This entry was posted on Friday, March 30th, 2007 at 3:53 pm and is filed under Andy Goldstein, FOOTBALL, Gridiron Goldstein. You can follow any responses to this entry through the RSS 2.0 feed. You can skip to the end and leave a response. Pinging is currently not allowed.